Goods and Service Tax (GST): Will it be beneficial for the auto sector and consumers?

The upcoming union budget in India is expected to introduce the ‘Goods and Service Tax’ element. It is a long pending process which was first introduced in the Vajpayee government in the year 2000 and since then it has been a matter of discussion concerning the economic reforms in the country. As auto industry is the crucial sector in India, people are waiting to see the upshots of GST in the sector. 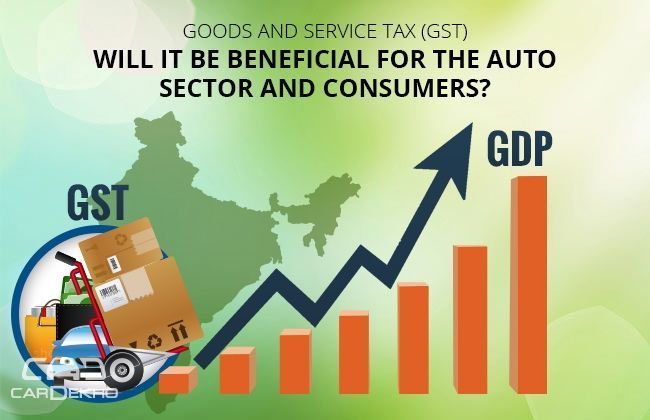 What is Goods and Services Tax (GST)?

It is an inclusive value added tax levied on the manufacture, sale and consumption of goods and services at national level. There is no difference between taxable goods and taxable services, and they are imposed at a uniform rate in a supply chain of goods and services until they reach the end consumer. There are various advantages of GST both for the industry and for the end consumer which can be summarized in the following points:

· When introduced, it would abolish multiple taxes on goods and services.

· It is easy to understand, easy to administer and spread uniformity across the country.

· Prices of goods and services could be simplified and justified.

· Reduction of compliance cost and increase of voluntary compliance.

· Reduction of effective tax rates to one or two flat rates.

· GST removes distortion in the economy from the cascading effect of tax system.

· GST improves exports capability of a country and gives an edge in overseas market for goods and services produced in India.

· It reduces corruption, harassment and litigation which are some of the burning issues.

· It widens the tax base and increment in revenue of State and Central Government.

· Last but not the least; it reduces the administrative cost of the Government.

How will GST be beneficial?

GST is considered to be the mother of all fiscal reforms through which a lot of tax regimes will come to an end. The current tax system in the country is helping more to the manufacturing states than the consuming states which do not receives the income of taxes paid by its people. So these taxes on taxes are flowing one after the other getting into the cost of the product and at the end of the day, the consumers bear 30-35 percent of the cost which is levied in the form of indirect taxes.

The auto sector is usually sensitive to the changes in the economy. The introduction of GST will change the way business is done today. In simple terms, the practice in the auto sector is to sell vehicles to dealers and they sell and service these vehicles, and more than 80 percent of sales are done outside the state of manufacture. It is currently subjected to CST or by the method of stock transfer to stockyards and depots across the nation. Both these methods entail tax cost which gets fixed to the final price offered to customers.

Moreover, the current stock transfers do not attract any tax besides loss of input tax credit to the exporting state. It is also possible that this implementation may be applicable on all the supplies including stock transfers otherwise it would have its own challenges. Majority of the auto companies have moved to the states where there is competitive tax incentives which are largely in the form of loan/subsidies equivalent to the VAT/CST paid in a particular state government.

Secondly, auto component manufacturers will usually setup their units close to OEM facilities just to avoid this VAT credit chain. The implementation of GST would open new prospects for the consolidation of all these units into larger units which will be beneficial for the overall economic efficiency of the auto industry. If the GST rate is fixed anywhere around 16 percent, it could be good news for the industry while the current rate works out to be more, particularly when talking about big vehicles where excise duty is much higher.

So Goods and Services Tax is not merely a tax reform but also an economic reform which will benefit both manufacturer and consumer. It would be one of the prime expectations from the upcoming first general budget of newly formed government. In addition to GST, a number of reforms are highly expected like streamlining the auto sector, free inter-state movement of vehicles, export incentives, support for the promotion of electric and hybrid vehicles in the country, reforms in emission and fuel efficiency norms, and rectifying various other issues. So let’s wait and watch for the D-day.