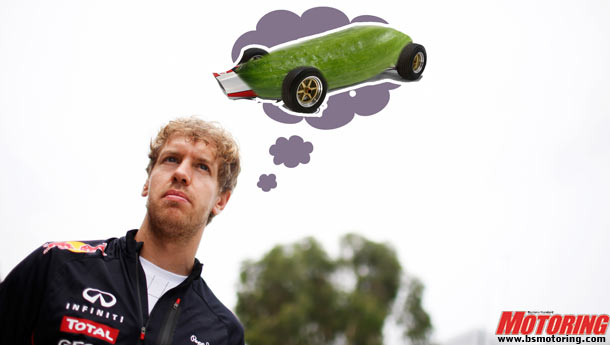 It all starts with some cumulonimbus clouds. Make sure they are ripe and waiting to burst. The rain that then starts to pour forth will orchestrate the rest of the event rather nicely. Take one slow moving HRT, place it on a rather slippery section of kerb and wait for Sebastian Vettel to come around to lap that very same car. Watch as the HRT’s wheels slide off the kerbs (they were wet as Narain Karthikeyan would say later) and then the two cars make contact. Lots of rude gesturing from Vettel and some vegetable-name calling later, he was done.

Now Sebastian Vettel’s always struck me as a rather affable chap. He’s generally got a grin on his face and seems quick to come up with a quip or joke. Which is why the extent to which he whined and droned on about the incident between the Red Bull and HRT was a little out of character. Yes, it cost him much-needed championship points and a possible podium. But that’s racing, eh, which, incidentally is exactly the sort of reaction that one would have expected from Seb Vettel after such an incident. At least the Seb Vettel we saw in 2010 and 2011. The very same Seb Vettel who was self assured and in one of two powerful (near-unbeatable) Red Bulls.

Cut to 2012 and Vettel’s RBR08 isn’t as dominating as its predecessors. Adrian Newey and Christan Horner might be getting a little hot under the collar as they see the two silver arrows outpacing them at the head of the grid. And that’s probably why Seb reacted the way he did too. ‘Cucumbers’ or not, Vettel’s outburst is a sign of the pressure he’s feeling because of the fact that he’s a double world champion in a car that’s nowhere as quick as it ought to be. Tough luck, then.

Maybe thinking back to the 2007 Japanese Grand Prix will help him sort things out in his head a little. Then too, it all started with those ominous rain clouds. Lewis Hamilton was leading the race, Mark Webber was chasing after him in second, and when the lead pair slowed down suddenly, Seb Vettel went straight into the back of Webber’s car costing him a potential victory. Well, well, Seb. Looks like the slippery stuff that goes around, comes around.