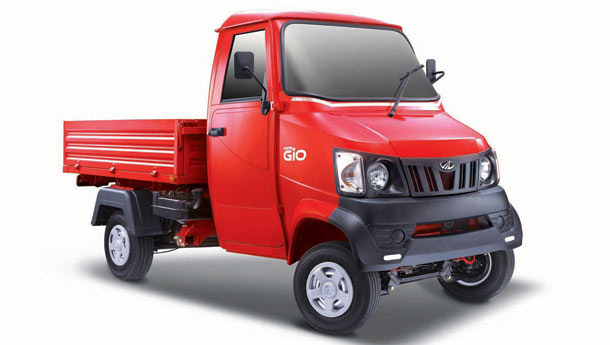 Two years ago, Mahindra & Mahindra quietly entered the three-wheeler market. These load carriers may not make it to motor shows across the world, but add greatly to last-mile connectivity in the narrow lanes of cities and towns where large trucks cannot enter. To Mahindra & Mahindra’s credit, it has cornered a 17 per cent share of the three-wheeler market against competition from well-entrenched players like Bajaj Auto and Piaggio. Little did rivals know that this was also meant to prepare the ground for an interesting strategic move by the company!

Mahindra & Mahindra has come out with a small truck, called the Gio, which is priced slightly above three-wheelers but significantly below the small trucks of Tata Motors and Piaggio. Its price tag is Rs 167,000. Three-wheelers cost around Rs 140,000. The Ace, Tata Motors’ bestseller, costs upwards of Rs 278,000. “We needed disruptive innovation to shake things up. By creating a new segment, which we call the compact truck, we are doing just that,” says Mahindra Automotive Senior Vice-president (marketing) Vivek Nayer.

Clearly, Nayer and his men want to draw buyers from both the segments -– three-wheelers and small trucks such as the Tata Ace and Piaggio Ape Truk. The market is big. Ernst & Young Partner Rakesh Batra reckons that transporters buy anywhere between 65,000 and 70,000 three-wheelers every year. This translates to sales of around Rs 1,000 crore. At the same time, small trucks that can carry up to one tonne of weight sell around 90,000-1,10,000 in a year. Of this, the Tata Ace accounts for over 80 per cent. (The Society of Indian Automobile Manufacturers clubs these small trucks in the category of light commercial vehicles. So, their exact numbers are not known.) In value, this works out to over Rs 2,500 crore in a year. So, the market that the Gio can address adds up to Rs 3,500 crore.

Gio’s USP
“There is a big price gap between three-wheelers and the next range of vehicles which are the one-tonne goods carriers. Hence, a product that is reasonably priced between the two and offers good fuel efficiency could turn out to be a bestseller,” says Batra. Sector experts say that most transporters buy three-wheelers on installments. So, an upgrade to the Gio will not pinch them very hard, unlike the Ace. There are multiple finance options for buyers that ask for 18 per cent interest as against 24 per cent for three-wheelers. This drives down the ownership cost. Most of these are small businessmen who want to keep their costs on a tight leash. This will be the Gio’s unique selling proposition.

One question begs an answer here — how has the company managed to come out with such a low price tag? Believe it or not, the development cost for the Gio is just Rs 25 crore. You could call it frugal engineering at its most economical. Mahindra & Mahindra modified an existing single-cylinder engine from Kohler and used competencies of its three-wheeler business such as in-house tooling and dyeing for the Gio. It is being manufactured at Haridwar in Uttarakhand which offers huge tax benefits.

Not just the price, Mahindra & Mahindra thinks it has got the capacity of the Gio right as well. It can carry half-a-tonne, though up to 800 kg can be comfortably loaded. Three-wheelers cannot lug more than 300 kg. The Tata Ace and Piaggio Ape Truk carry up to one tonne. But Mahindra & Mahindra feels these trucks often ply without their capacity fully used. “Intra-city distribution networks often require smaller payloads than one tonne,” says Batra. This tilts the scales in favour of the Gio, though it also means that the new truck could eat into Mahindra & Mahindra’s three-wheeler market. “Some cannibalisation will happen but as long as the franchise grows, we are okay with it,” Mahindra Automotive Chief Operating Officer Rajesh Jejurikar admits.

Tata Motors executives refused to be drawn into a face-off with the Gio. But what everybody agrees on is that this is the size to go. All projections say that large trucks will ply over long distances and small trucks will be used to reach goods within cities. The market which was at one time occupied by light commercial vehicles will soon get captured by small trucks. “We do expect maximum traction for intra-city transport and goods carriage,” says Nayer. Piaggio Vehicles India Chairman and Managing Director Ravi Chopra says the three-wheeler cargo segment cannot be wished away. “Transportation needs will intensify as rural India becomes the playground for marketers. Three-wheelers will be more relevant for their low acquisition and running costs.”

In such a situation, fuel efficiency becomes all important. Mahindra & Mahindra claims that the Gio can run up to 27 km on a litre of diesel, as compared to the 16 to 18 km that the Ace can run. But this is still a couple of notches below three-wheelers. A small turning radius of 3.4 metre (as against the 4.3 metre of the one-tonne Ace) also means, the company claims, that it can find its way out of a narrow lane better than other commercial vehicles.

Aspirational product
Mahindra & Mahindra, on its part, does not want to bank on cost calculations alone — there is the softer side too that it has worked on. It aims to restore the pride and status that three-wheeler driver-owners sorely miss. “They have always felt that despite the hard work they put in, their families do not accord them the same respect as the owner of a four-wheeler gets,” says Nayer.

The Gio, thus, has a distinct style, developed in-house by the company along with design consultant Thairung. The interiors and ride quality have been revved up to match, the company claims, one-tonne trucks, so that buyers don’t feel shortchanged in any way. The driver can enjoy roll-on windows, a roomy cabin, car-like steering, a sliding seat, windshield wiper and gearshifts (all in sharp contrast to three-wheelers). Larger tyres, a rear leaf-spring and front independent McPherson suspension (not found in current one-tonne trucks) for better stability and load-carrying ensure that the ride quality does not take a beating.

Even the name for the truck was chosen to phonetically resemble the verb ‘live’ in Hindi, jiyo. The TV campaign, launched on November 20, too plays on the theme and is not product- or feature-centric. It depicts an erstwhile three-wheeler driver-owner commanding respect with a Gio as he goes about his tasks. “We want to tell them that this vehicle is going to change the way people look at them,” says Nayer.

Chopra thinks the buyers for half-tonne four-wheelers will be primarily businessmen who will use it for last-mile transport. The Gio has indeed caught their attention. A national courier company and a TV manufacturer have already ordered in bulk, their interest spiked by the Gio on the internet. Mahindra & Mahindra had stepped up the buzz around Gio’s launch on the internet. Surfers who had any interest in automobiles, from bloggers to journalists, were contacted with information about the vehicle. It made the Gio one of the top-ten searched words on its launch day.

However, the internet might not strike a chord with the bulk of the Gio’s target audience — the owner-driver of a three-wheeler or a small truck. Apart from the TV campaign, which will ensure a reach for the brand through regional and hindi channels, Mahindra & Mahindra knows the importance of word of mouth in the market segment on its crosshairs. It claims that the Gio is the first commercial vehicle to afford customers demo rides at the showroom.

Fortifying Gio’s chances
Taking a page out of its three-wheeler business has also helped Mahindra & Mahindra fortify the Gio’s chances in the market. Jejurikar says: “It was because of the three-wheeler arm that we realised that our reach had to be more widely spread. So, we have set the target to retail the Gio out of 500 outlets (with 152 dealers) instead of the 375 that we have for three-wheelers.” Users could adapt the Gio to several uses, a lesson that the Ace has taught the industry. So, be it for milk bottle delivery or gas cylinder transport, for example, customers can retro-fit various frames to suit their needs with the help of the dealer. Though this could push the cost up by Rs 25,000.

Up next are a CNG variant for cities like Delhi and also a passenger version for plying on the outskirts of cities as a stage carriage. Mahindra & Mahindra hopes it will be able to manufacture 3,000 trucks every month at full demand. Some experts like Batra of Ernst & Young feel this is a conservative target.

For now, the Gio has given Mahindra & Mahindra the first-mover’s advantage in this segment between the Ace and three-wheelers. But the market place could get crowded soon. Piaggio has its own half-tonner lined up for launch by February 2010, if not earlier, and Tata Motors is also expected to come out with its version by that time. Bajaj Auto too has something similar in the works.

“The Gio being the first in this category could gather word-of-mouth publicity and build a reference base. This would put pressure on the other players when they enter the market and they might have to give discounts or other freebies to win customers,” says

Batra. Mahindra & Mahindra, too, would like to make a mark before competition catches up.