GM to pull out of e-Spark project 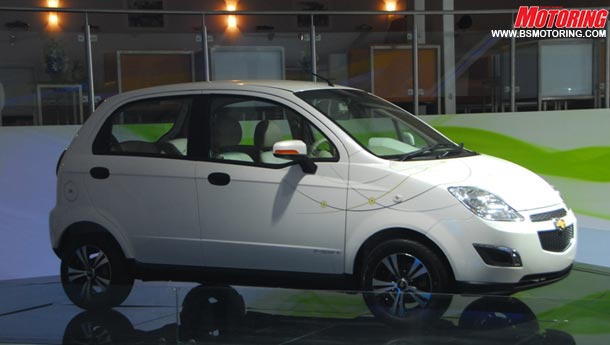 Likely to discontinue e-Spark programme with REVA; move may push up costs.

American car maker General Motors (GM) is likely to pull out of its technological partnership with REVA Electric Car Company (RECC), after domestic auto major Mahindra & Mahindra Ltd bought 55.2 per cent equity in the Bangalore-based company to stake its place in the fledgling electric vehicle market.

GM, which had signed an agreement with RECC last September to jointly develop and produce electric vehicles, the first of which was expected to hit Indian roads later this year, indicated it would go at it alone, hours after Mahindra formally announced it had acquired a majority stake in India’s most recognisable electric car brand.

“We may not continue the Spark EV (Electric Vehicle) programme with REVA in the light of this development and will pursue our own electric vehicle programme. An announcement to this effect will be issued soon,” said GM India Vice-President P Balendran, in an emailed statement from China.

In the 2009 arrangement, GM was to focus on developing platforms and anchor the manufacturing, while RECC would work on electric drive-trains and control systems. The first project of the partnership was to roll out an electric version of the Chevrolet Spark, GM’s volume driver in the Indian market. The rollout of the e-Spark was expected by September.

Although GM had declined to divulge the cost of this programme, a senior company executive had last year said it would be able to recover costs if it could sell between 4,000 and 6,000 units of the e-Spark.

Industry experts feel GM’s association would be beneficial for it, as the e-Spark would be India’s first four-door electric car and would, therefore, have had leverage over other companies.

“The initial cost of ownership of domestically manufactured electric vehicles is very high and the prices shoot up further if the vehicle is imported. Consequently, it would make more sense for GM to continue its association with REVA to make the business proposition viable,” an industry expert said.

“GM’s technical collaboration with REVA was a strong point for them to go ahead into the electric vehicle industry. However, if the company decides to go alone, it would mean more money and more time than earlier projected,” Abdul Majeed, national head (automotive practice), PricewaterhouseCoopers added.

Currently, the base model of the Spark costs Rs 3.17 lakh (ex-showroom Delhi). Industry estimates suggested the e-Spark would have come at a premium of 40-50 per cent over the petrol-driven one.

On its part, however, Mahindra said it had no problem with the American car maker continuing its technological alliance with RECC but certain sales arrangements would have to be annulled.

“We have not yet called off the deal with GM. Now it is up to them to decide what they want to do. As regards marketing of REVA cars, we will leverage the strength of Mahindra Group,” said Chetan Maini, chief of technology and strategy of Mahindra REVA Electric Car Company Ltd, as the firm has now been renamed.

For instance, the agreement between GM and RECC to sell electric vehicles through outlets of the former in select cities would have to be scrapped. Instead, Mahindra would make REVA vehicles available at 172 outlets nationwide. To begin with, it plans to roll out from 75 outlets with immediate effect.