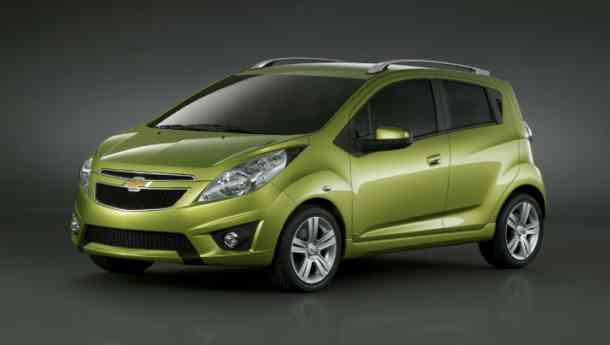 Carmaker General Motors has said it will export at least 20 per cent of the planned production of 50,000 units of its mini car within the first 12 months of launch early next year.

The company will also roll out luxury sedan Chevrolet Cruze in October with a 2.0 litre diesel engine, which would be followed by a 1.8 litre petrol one. Besides, it is planning to launch four models in India in 2010.

"We will start production of our mini car, developed on the concept of Beat, at our Talegaon plant in December and it will be launched sometime in January next year, starting with the petrol variant," General Motors India President and Managing Director Karl Slym said.

The mini car would cost around Rs 4 lakh and the company hopes to produce over 50,000 units during 2010, he added.

"The company is targeting to export 20 per cent of the mini car's total production during that period," Slym said.

The Indian subsidiary of the US car giant General Motors is aiming to sell 10,000 units of the mini car by end the of 2010 in Sri Lanka, Bangladesh, Bhutan, Nepal, besides the Asia-Pacific region and European countries, he added. About the localisation of components in the mini car, Slym said: "It will initially have 65 per cent localisation. However, we plan to make it almost fully-localised once our engine transmission plant in Talegaon gets operationalised by 2010."

On its next launch Cruze, Slym said, "We have started production of the Cruze at Halol plant. We will launch the sedan initially with a 2.0 litre diesel engine in October and introduce the petrol variant with a 1.8 litre engine around the New Year."

The car would be in the price range of Rs 12-14 lakh and its diesel variant would have the same engine as the Chevrolet Captiva, he added.

"Besides the mini car, we will have three other launches during next year. It is part of our commitment to the Indian market after the parent company's reinvention and bounce back from bankruptcy protection," he said, without providing details on the new models.