On April 29, Motherson Sumi, India’s largest auto component manufacturer, said it had managed to open up 80 of its 152 manufacturing units spread across the globe. That was just a month into the nationwide lockdown announced in India to control the spread of the Covid-19 pandemic.

The lockdown lasted about two months and is still in place in pockets across the country, leaving manufacturers reeling. However, Motherson’s spread across the world has made it an outlier.

It operates 270 facilities across 41 countries. Even in terms of exports, the company’s strategy is clear. If exports to a country increase to over 10 per cent, the firm would rather open a branch in that nation.

“We have a fairly big presence in China, and by January end it was clear that the holiday period in China will be increased because of the spread of the virus. China was the first to get impacted and come out of it. From that, we realised how governments across the world were going to respond. We saw it happen in Europe, America, Mexico and in India. We had an idea about the hurdles during reopening and were better prepared. Hence, all our plants were up and running in a very short period. We had that first-mover advantage,” says Vivek Chaand Sehgal, the founder of the company and chairman of the group.

Today, Sehgal says all 27 plants in China are functioning at full capacity.

ALSO READ: Bharat Forge cranks up for the future as Covid dents biz at home and abroad

The slowdown in the auto industry, which has worsened after the pandemic, worries Sehgal, but it’s not at the top of his mind. “The kind of demand we are seeing across the globe, I am sure the demand will be back pretty soon. None of our customers have cancelled orders. In fact, they are asking us when we can scale up to 100 per cent,” Sehgal says.

During the lockdown, Sehgal and his long-term Japanese partner, Sumitomo Wiring Systems, finalised the restructuring of the group, a move that was announced in 2012. In December 2019, it was decided that Sumitomo would focus on the harness business and Motherson would take out all other businesses and form a separate entity.

They carved out the domestic wiring harness business into a separate entity that will eventually be listed. The holding company, Samvardhana Motherson International (Samvardhana), will be merged into Motherson through a share swap, and renamed as Samil.

Investors were not happy and the stock was hit.

“The restructuring will make this company powerful. It will be rewarding for minority investors. Through the separate entity, we will also diversify into many other non-auto areas,” Sehgal says, when asked about the market response. 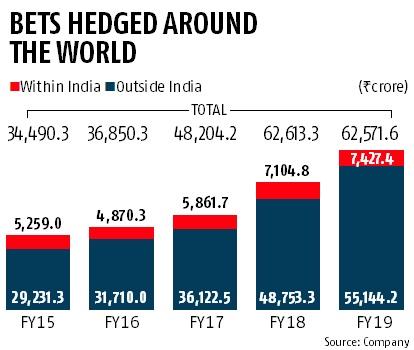 Even as the firm’s rivals worry about their survival, Motherson’s liquidity is sufficient and, if necessary, the company is capable of raising funds and servicing its immediate payment obligations.


Around a third of the company’s debt, around Rs 4,000 crore, matures in 2021. This includes a revolving credit facility of euro 575 million, of which it has availed of euro 120 million, and a $400 million bond. “For a company like ours, which has never defaulted, has high credit rating, to raise liquidity if required is never a problem,” says Gaya Nanda Gauba, chief financial officer of the firm.


In April, the firm raised Rs 500 crore through non-convertible debentures (NCDs). Its presence in European countries and the US helped Motherson get support from those governments as well, as they have provided financial stimulus to the industry.


“We have significant credit facility. We have good undrawn levels. It is important to carry cash. We have got government support coming in as long duration of loan at cheaper rates. It’s a bit of a trade-off between taking bank loans or government assistance. The Rs 500 crore that we raised was only to improve liquidity. We always want to be prepared for the future,” Gauba adds.


The company, in fact, sees acquisition opportunities, as several smaller component manufacturers would find it tough to survive.


The company has completed a total of 22 acquisitions, and it has made each of them count. Of these acquisitions, 12 were loss-making companies when acquired and four had very low Ebitda (earnings before interest, taxes, depreciation, and amortisation). Almost all are Ebitda positive now.