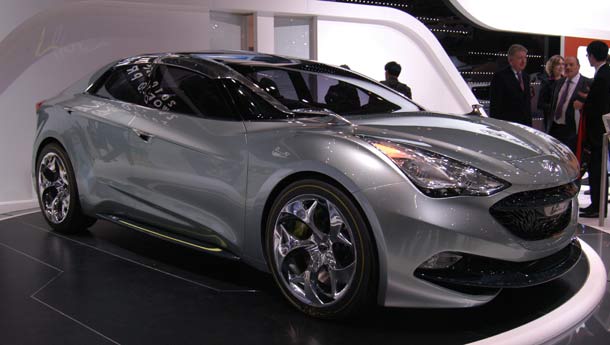 Am writing this as day one of the Geneva Motor Show comes to an end and the halls have started to clear out. The good news is that the disappointment of the Tokyo Motor Show is sort of history and things are looking good again.Yet, the glitz and glamour of the shows form 2006-07 isn't really there, though there are signs things have started to come back on track.The bad news is that there are fewer concept cars. Apart from the Hyundai i-Flow (awesome car with some clever technologies from BASF), the Porsche 918 (new gen Carrera GT?) and the Citroen Survolt there were practically close to no other concepts from the biggies. So the recessionary effects haven't worn out completely yet.

Though I did have some interesting conversations today. When I asked Ian Callum, design chief of Jaguar about the possibility about the XK with the 3.0-litre twin turbodiesel, he said, it sounds like an idea, but was hoping that somehow the management also thought the same. After all a GT that can travel hundreds of kilometres without a fuel stop with very little to give away in terms of performance is quite a thought.

Another interesting conversation happened with Shiro Nakamura, Nissan's design guru. He felt that the market was moving towards smaller crossovers (like the Juke that was shown at Geneva) and while bigger SUVs will continue to sell, moral turpitude tends to draw people towards crossovers. He refused to say though if the Juke's design philosophy would influence the next...er, GT-R.

Christian Von Koenigsegg was the usual chirpy self. He wasn't distraught that his company couldn't seal Saab in, and yet was pretty enthusiastic about his latest iteration of the Koenigsegg CCX - the 910 hp Agera. Even down to cleaning the finger print marks on the car all by himself.

Michael Schumacher's presence at the Mercedes-Benz stall somehow seemed out of place. How many times would you picture Michael on a silver and white background and not one on a Rosso Corsa, huh?! Jackie Stewart seemed more interested in the Porsche 918 and could be seen animatedly talking about the centre console, which I must admit is quite interesting.

The best bit about Geneva though is everyone was there. Every single important individual from the auto industry or fraternity could be found. It's still the most important auto show on earth and even though it isn't the biggest, it's still got the cars and the glamour to ensure its place in motown.