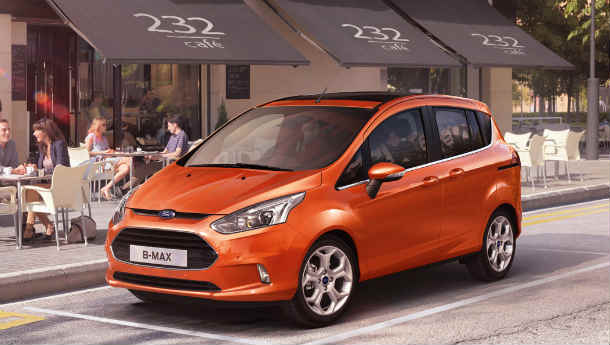 If the concepts and production prototypes at the Auto Expo are anything to go by, this is looking more and more like the year of the MUV/MPV. Take this new Ford, to be shown at the forthcoming Geneva Motor Show, for example. The B-Max concept was first shown at last year’s Geneva show and this time a production version will make it there. Ford plans on bringing in eight new models to India by 2015, the new Fiesta and EcoSport models being the first and second models in this barrage. This B-Max may well be the third one to make it in.

This compact MPV revels in its clever utilisation of interior space and for once, Ford has also thought about how you're going to cram all your things into it too. Ford has a very unique solution — eliminate the B-pillar altogether. Once you slide open the rear doors, you’re greeted with a very large opening to cram all your things inside. In fact, the opening created by this design is about 1.8 metres wide.

An interesting tidbit to note is that the concept car Ford displayed last year comes in at a length of 4.04 metres. The details of the production car are scarce, but it's possible that the one that makes it here could clock in at under four metres, allowing for an excise duty cut. If it ends up being a sub-four metre MPV, then a larger variant may come our way in the future, which could seat seven people and possibly take on the upcoming Maruti Suzuki Ertiga. The boot is rated at 397 litres, which can be expanded to over 1,000 litres.

Powering this MPV will be the 1.0-litre EcoBoost turbocharged petrol engine, with 118 bhp, and the 1.5-litre diesel engine found on the Fiesta with 90 bhp — so you can expect some sprightly performance. If the B-Max does make it to our shores, expect it to be priced around Rs 6-8 lakh, ex-showroom. This isn’t Ford’s first crack at the large hatchback/MPV segment here, they started that off with the Fusion, but that didn’t work out very well. The B-Max is essentially a replacement for the Fusion in Europe, so we won’t be surprised if it takes on the same role here as well.

It won’t be Ford’s only MPV offering either.

The larger S-Max MPV, which was the first model in Ford's line-up to feature kinetic styling, may also come here and could be positioned against the likes of the Toyota Innova. All of this depends on the response the B-Max receives. Expect it to arrive by late-2013/early-2014, and it could also be the first product to roll out of Ford’s new facility in Sanand, Gujarat.