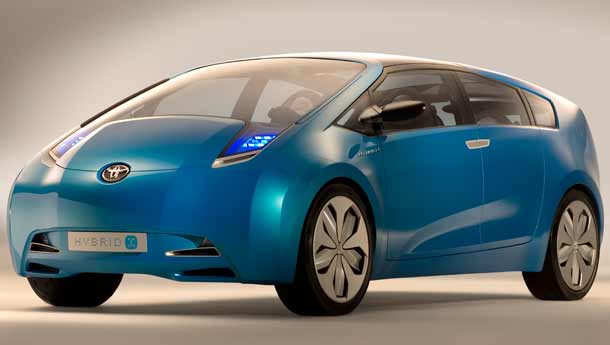 Instant Qarmaq
Don’t blame us if this looks like a nuclear sub, but then you wouldn’t, would you? Not that Hyundai has started building submarines at its shipyard in South Korea, but if they did, they needn’t look far for inspiration. Tipped to be a preview to the next gen Tucson, the concept is a joint development effort with GE Plastics using thermoplastics and composites. Makes us wonder how it would look with spinners on it.

Sake with Hakaze
Mazda seem to have taken the ‘rice’ joke a little too seriously. Now on a high with sake, this is yet another concept that looks like an iteration of the Nagare or Ryuga. Not that they have had too much to drink, because the Hakaze does resemble a Hot Wheels toy. Love it or loathe it, the Hakaze with its flying lead motif and sand dune ripple look (called the ‘flop’ technique of colour manipulation) could become the basis for the next CX-5. By the way ‘ha’ means leaf and ‘kaze’ means wind.

Free falling
What do you do when you don’t have an SUV in your lineup? Simple, you take a car and raise its height. Voila, you have an SUV ready for sale. That’s exactly what the Seat Altea Freeback is all about. Using the Altea as a base, they increased the ride height by an astounding 185 mm, added a four-wheel drive system, a 2000cc 240 bhp engine and 19” wheels to complete the raised stance. Thank God VW hasn’t thought about it with the Golf yet.

LUV to love you, baby
This could be the Cadillac Escalade pickup truck for the bling set. Developed by the German engineering firm EDAG, the LUV (luxury utility vehicle, what else?) concept uses a part Escalade, part Avalanche setup with a teakwood surface for the loading bay that can rival the craftsmanship of the Rolls-Royce Drophead Convertible. They didn’t stop just there, and went ahead and plonked a 6100cc V8 tuned by Brabus. Considering it’s a fast truck with exquisite ornamentation and chrome, we don’t doubt it’ll be a hit with a lot of the west coasters.

Splat out
Bugs take cover! The new swatter in town relishes the thought of some crustacean bodies on its windshield. BMW have pulled the wraps off the M3 Concept – a glimpse of what to expect when they reveal the production model later this year. With a 4000cc V8 and 420 bhp driving the rear wheels through a six-speed manual or dual clutch ’box, the M3 might just help the local municipality in their vermin killing. drive.

X factor
The Prius has been Toyota’s pride for years. But it’s time for a replacement and we think this is it. Nicknamed the Hybrid X for now, we believe it has all the makings of the next Prius. With a low-ish stance yet wider track, the Hybrid X uses two design themes – the J-Factor and Vibrant Clarity (yeah, whatever) – while it has LED lighting systems and drive-by-wire for the techno geeks. It wouldn’t look out of place in 2020: A Space Odyssey now, would it?

Out in the Opel
Opel has a habit of bringing out some stunning concepts at the European shows. This, the Opel GTC concept, is just another in recent years. With a 300 bhp engine and four-wheel drive, the GTC concept has the makings of yet another interesting Opel like the Antara SUV. Based on the underpinnings of the next generation Vectra, this stunner has all the ingredients for a production car.

Green and bare it
The hybrid bug has bitten everyone and Honda thinks there’s space for even a small sports car using hybrid tech. Using the four-cylinder IMA petrol/electric engine, the Honda Small Hybrid Sports Concept (big name for a small car) hopes to deliver a fun package while ensuring the environment suffers minimal impact. With those huge wheels, a gaping grille and doors that begin in Narita and end in La Guardia, this concept is one that’s left us scratching our heads.

Six fix
Remember the Covini? Yes, the six-wheeled supercar that caused quite a stir at the same show two years back. Citroen too have gone for a six with their Cruise Crosser, but with a few differences. There are four wheels at the rear and not at the front, it is a pickup truck and all wheels are driven, one of the axles by an electric motor. Wonder how many spare wheels you need to carry though.

BSM Rating: Lindt Chocoletti (can be mixed with stawberry juice)

Torque-ative
Bentley are not happy with just having the Continental GT, Spur and Arnage. They had to have an even bigger, more garish coupé. The Brooklands is so huge that it looks like it could start from one end of the Channel Tunnel and end at the other. Based on the Arnage, the Brooklands is powered by the same 6750cc V8 engine, but now puts out 530 bhp of peak power thanks to its twin turbos and a channel sucking 105 kgm of torque. It doesn’t get any more obscene than this.

Count Zagato
It’s the kind of car the Dutch royalty would love to own. Spyker’s new flagship, the C12 Zagato, is a limited edition coupé with 24 units destined for some lucky monarchs and head honchos. Powered by Audi’s famous 6000cc W12 engine, it produces 500 bhp and enough torque to shred tarmac faster than you can say Count of Monte Cristo. Spyker claims the car is inspired by its MF1 Spyker, making it one of countless other supercars drawing inspiration from Formula 1.

Shake a leg
Lamborghini is getting more unbelievable by the day. With the new Superleggera Gallardo, not only do they want to take the fight straight to Ferrari’s upcoming F430 Challenge Stradale, but to rule the roost in the entry-level supercar segment. With 525 bhp of peak power from the 5200cc V10, the Superleggera is 100 kg lighter and 0.2 seconds faster in the dash to 100 kph. Also read April Test elsewhere in this issue for more unbelievable Lamborghinis in the pipeline.

i spy
This is Hyundai’s latest super hatch. The i30 is based on the good-looking Kia C’eed, which in turn is based on the new Hyundai Elantra platform. Ditching famous monikers like Accent and Sonata, the alphanumeric Hyundai will be powered by either a 1600cc 113 bhp or 120 bhp engine with a five-speed manual or a four-speed auto and a 2000cc 141 bhp engine mated to a six-speed manual. Expect the next Hyundai PA to be designated the i10.

Bingo!
This is the new Twingo and we don’t see why they shouldn’t get it to India. The four door car shares its architecture with the previous generation Clio, which is not a bad thing. Powered by a 1200cc 4-cylinder engine, it produces 75 bhp in normally aspirated spec and 100 bhp for the full blown turbo’ed version. The instrument binnacle is mounted on the centre console, reminding us of the Nissan X-Trail, while it has bluetooth connectivity and USB compatibility. All the ingredients for the young Indian executive on the move.

Gran scheme of things
Maserati launched the 2+2 coupe, the GranTourismo, at the
Salon but with the intent of gaining a massive backlog for their order book. Using the respected 4200cc V8 engine from the Quattroporte, the GranTourismo can do 100 kph in 5.2 seconds and a top speed of 285 kph, thanks to the 405 bhp driving the four wheels. The sumptuous car is now available for sale to everyone in Cote D’Azur, Monte Carlo, Beverly Hills and Malabar Hill.

Brav-oh
Being Maserati’s parent company has its benefits – the Bravo’s Maser 3200 GT look is so stunning that Autoblog reckons it is good enough for a US launch. Powered by the 1900cc multijet engine with 120 and 150 bhp on tap and a 1400cc petrol with 90, 120 and 150 bhp options, it would be a good idea for those stingy Americans, considering the Jazz and Yaris are already there.

Have a-barth
Douse yourself in shame if you haven’t heard of Abarth. The racing division of Fiat with the scorpion as its logo has made a return with the new Grande Punto Abarth. Using a 1400cc turbocharged engine, the Abarth produces 150 bhp of squirrel- scaring power and can hit a top speed in excess of 200 kph. Abarth will later introduce a 180 bhp version as well as a potent S2000 rally car with 275 bhp. Now cool off.