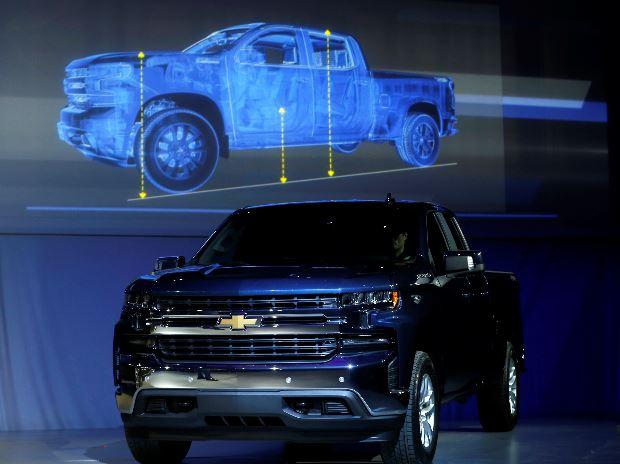 General Motors reveals its 2019 Chevrolet Silverado pick-up truck at Eastern Market before the start of Press Days of the North American International Auto Show in Detroit, Michigan, US | Photo: Reuters

It’s going to be the year of the truck in the US, and General Motors Co. wants to steal back some market share.

GM kicked off the Detroit auto show by revealing an all-new Chevrolet Silverado pickup, the first completely redesigned truck for the automaker since the 2007 model year. The pickup with have eight different trim levels, two new V-8 engines and shed as much as 450 pounds from the current model to save fuel.


The redesign - a bigger overhaul than the 2014 refresh of the Silverado - reinforces GM’s bid to win back market share from rivals Ford Motor Co. and Fiat Chrysler Automobiles NV. Silverado was again the second-best selling light vehicle in the US last year, but it trailed Ford’s F-Series -- the top-selling vehicle line in America for the 36th consecutive year -- by more than 300,000 units.


“This is arguably the most important product in the Chevrolet portfolio,” Alan Batey, president of GM North America, said Saturday. “We’ve put so much effort into understanding the customer and with eight different models, we’re very optimistic.”

The new Silverado has a longer wheelbase and more cargo and passenger space, said Mark Reuss, executive vice president of global product development. Its frame is 80 percent high-strength steel. The doors, hood and tailgate are made of aluminum, but the cage protecting passengers is all steel, he said.


The V-8 engines can shut off anywhere from one to seven cylinders to save fuel while cruising.


GM has decided against using aluminum in the truck bed like rival Ford did, Reuss said. The bed is wider than the current truck and made of a higher-strength steel alloy. It also features a power tailgate and a 120-volt outlet.

“Work comes first for truck buyers,” Reuss said. “The bed is like the head of a hammer. You won’t get much work done with an aluminum hammer.”


In the battle for pickup dominance, there are big dollars at stake. Full-size pickups are top sellers for Detroit’s automakers and collectively bring them annual revenue of more than $90 billion. Morningstar Inc. estimates that profits are at least $10,000 per truck -- and even more for high-end models -- compared with about $3,000 for passenger cars. That’s why the three companies invest so much to develop their pickups and fight hard for every sale.


GM will begin deliveries of the new Silverado in the fall, months after Fiat Chrysler plans to start selling its redesigned Ram 1500.

The Silverado and its cousin, the GMC Sierra, had the lowest combined share of the full-size truck market on record last year, despite having incentives that were nearly $1,000 higher than the Ford F-150 on average, according to car-shopping website Edmunds.


When GM offered employee pricing to consumers in December, the average incentive spending for each Silverado 1500 sold was almost $8,000, compared with about $5,000 for Ford’s F-150, according to data from J.D. Power.


“Chevrolet needs to make a bold statement if it’s going to claw back market share in a segment with the most brand-loyal buyers,” said Edmunds’ executive director of industry analysis Jessica Caldwell. “The aluminum redesign of the F-150 was controversial, but Ford gained market share steadily ever since, so it’s clear that buyers can be swayed if they like what they see.”