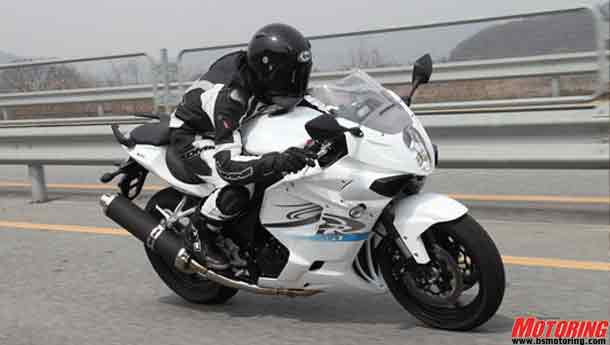 Garware Motors Managing Director Diya Garware Ibanez said, “We have access to products across S&T portfolio. We may look at launching products in the 250 cc and 125 cc segment to boost volumes in future.” She, however, clarified that the products are not being considered for introduction in the course of this year. According to data available with Society of Indian Automobile Manufacturers (SIAM), the motorcycle segment in the country grew by 24 per cent to 7.4 million between April 2010 and January 2011.

S&T, which manufactures the Hyosung range of two-wheelers, entered into an agreement with Garware in October last year to launch high-end sports bike GT650R and cruiser ST7 in India in April 2011. The motorcycles will be assembled at Garware’s plant at Wai, Maharashtra.

While the sports bike will be priced below Rs 5.5 lakh, the cruiser is expected to come for around Rs 6 lakh. “We expect to sell around 2000 units in the first year of operations. We are yet to take orders but have already received enquiries from over 300 customers,” said Ibanez. In the course of the year, a naked version of the sportsbike would be introduced in the Indian market.

Garware, at present, would import the bikes as completely knocked down units (CKD) from Korea. Once the volumes become larger, on the back of introduction of low-priced models, the company would set up a manufacturing unit at its existing facility in Maharashtra. Starting April, 8-10 bikes per day would be manufactured at the plant and production could be scaled up according to demand.

The company has firmed up plans to open 10 dealerships in Gurgaon, Delhi, Jaipur, Chandigarh, Ahmedabad, Pune, Mumbai, Bangalore, Goa and Chennai this year. Sales centres would next come up in tier-II and tier-III cities like Trivandrum, Cochin, Indore and Dimapur.

Hyosung had earlier entered into a partnership with Kinetic Motors in India to sell bikes such as the Comet 250cc, Aquila and GF 125.

The partnership, however, did not last long and Kinetic exited the two-wheeler business when it sold off its assets to Mahindra in 2008.