Maruti Suzuki, the country's largest car maker with 45 per cent market share, led the growth for the industry, closing 2014-15 with an increase of 11 per cent in sales when compared to the previous financial year. Its launches such as Ciaz, Celerio, Alto and Ertiga became crowd-pullers. Maruti Suzuki's total domestic volume of 1.17 million units is the highest ever in annual sales by the company.

Korean brand Hyundai, the country's second-largest car maker, followed with a rise of nearly 11 per cent during last year. Its launches such as Xcent, Grand i10 and Elite i20 helped evoke consumer excitement despite a poor sentiment in the market.

Rakesh Srivastava, senior vice-president, sales and marketing, Hyundai Motor India, said, "In a market with a weak sentiment, Hyundai achieved its highest-ever single-month sales of 39,525 units along with the highest-ever financial year sales of 420,668 units. Market share of 16.3 per cent was the highest-ever, with the successful launch of new models such as Elite, i20 Active, Xcent and Verna and led by strong marketing initiatives to engage rural markets and repeat buyers."

Honda Cars India, which has overtaken Mahindra & Mahindra to claim the third rank in last month's sales, clocked a massive 41 per cent growth in sales at 189,062 units for 2014-15 as against 134,339 units sold in the year previous to the last. The growth has been on the back of the launch of Mobilio and City and also due to the addition of a new plant in Rajasthan, making it the fastest growing car maker in the country. 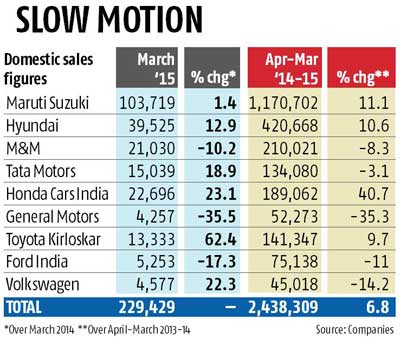 Jnaneswar Sen, senior vice-president - marketing & sales, Honda Cars India (HCIL), said, "The fiscal 2014-2015 has been extremely fruitful for HCIL. The new Honda City has achieved exceptional success, with over 100,000 sales in 15 months. We are excited about the upcoming launch of Honda Jazz in the new fiscal and look forward to another year of good growth. HCIL also witnessed 36 per cent growth in nation-wide dealer network expansion by focusing on existing markets and new tier-III cities."

Tata Motors saw sales go down 3 per cent in 2014-15 primarily because of the poor perfomance of its Nano and Indica models. However, the good news for the company is that since September the launches of Zest and Bolt helped. That was reflected in the fact that Tata Motors saw its sales increase 19 per cent in March this year.

Mahindra & Mahindra posted a dip of 10 per cent in March volumes and an 8 per cent fall in yearly volumes as no new models were introduced by the company, with the exception of the all-new Scorpio launched in the middle of last year.

Pravin Shah, president and CEO, automotive division, M&M, said, "With factors such as expectation of a normal monsoon, settling down of petrol and diesel prices and the likely softening of interest rates, we expect the auto industry to perform better in FY16. Going forward, we expect to perform better on the back of all these factors coupled with our planned new launches."