Amid an ongoing battle between ousted Tata Sons chairman Cyrus Mistry and Ratan Tata, Nusli Wadia, an independent director on the board of Tata Motors, on Thursday wrote a letter to the shareholders of the company defending his role on the board and questioning the allegations levelled against him by Tata Sons.

"... It is my duty to point out to you, the baseless and false allegations that have been made in the explanatory statement by Tata Sons supporting the resolution to seek my removal. I addressed each of the allegations that they claimed to be their reasons for my removal none of which were linked to my performance as Independent Director," he wrote.


Wadia again referred to Tata Nano as an ill-conceived investment that had been a drag on the company's finances. "I have outlined events relating to some key decisions of the Board. Most important of all is Taqata Motrors' ill-conceived investment in NANO, the car that neither sells nor is viable as every sale of the vehicle is at a substantial loss to the company."


Here is the full text of Nusli Wadia's letter to Tata Motors shareholders:

I had sent you a few days ago, a detailed letter setting out my response to the resolution proposed by Tata Sons for my removal as a Director of your Company.

As I mentioned, I have served your Company as an 'Independent Director' for more than 18 years having been invited by JRD Tata, my mentor and Godfather.

It is you the Shareholder of the Company who have over these years re-elected me to serve your Company and reposed your faith and confident in me: The last occasion being in 2014 with an overwhelming majority of more than 92% of the votes cast.

In my letter I felt it my duty to point out to you, the baseless and false allegation that have been made in the explanatory statement by Tata Sons supporting the resolution to seek my removal. I addressed each of the allegations that they claimed to be their reasons for my removal none of which were linked to my performance as an Independent Director. I also referred to representations made by me to the Board on the subject seeking their action. I also recorded that the Board and the Director had evaluated my performance at their respective meetings.

The Notice by the Company that is before you states clearly that I Continue to be an Independent Director, despite the allegation made by Tata Sons. You may wish to seek guidance from the Independent Directors at the meeting as to my performance and contribution to the company ans seek their views on my independence. I have also drawn your attention to the events that triggered the notice, issued at the midnight hour seeking my removal.

I have outlined events relating to some key decisions of the Board. Most important of all is Tata Motors' ill-conceived investment in NANO, the car which neither sells nor is viable as every sale of the vehicle is substantial loss to the country. After its commercial failure which became evident not too long after its launch, huge losses have been incured over the years. The plan on which the investment was made was for 2,50,00 cars while the production in the year 2015-16 was in the region of 20,000 cars and presently far less. The delay in the closure of NANO is a serious drain on the finances of the Company, in addition it has created a very negative image of the Passenger Vehicle Business (PVB) of the Company. The investment and losses on NANO have been in thousands of crore rupees and its continuances for the wrong, non-financial reasons is against the shareholders interest.

The PVB over the year has very huge negative impact on the company primarily because of design, product, quality, execution and high cost all being directed from the top. The division has high capital employed, high level of loss that impacts the overall financails of the company. It is only recently that he strategy has been evolved, and presented to the Board for the first time with an international level of professionalism covering design, cost, quality and viability.

I have brought to your attention that Tata Motors has high level of cross holding of Tata Companies the largest o f which is Tata Sons, valued at approx 8,600 cr. They are being held in a debt ridden company to keep the voting control over Tata Sons. The listed companies as a while have blocked approximately Rs 70,000 cr in holding Tata Sons share equivalent to 14 per cent of its capital with the sole purpose of shoring up the voting rights of the shareholders of Tata Motors who own 70 per cent of the share of your company to decide whether you want to be the holder of Tata Sons share with minimum return, zero liquidity and no exit. This would apply to all the shareholders of the relevant Tata Companies.

I bought to your attention matters that relate to Corporate Governance, of the lack of it. An Agreement that was initialled with the union after 14 months of discussion. First time in the history of Tata Motors Pune, a Productivity Linked settlement was agreed initialled and to be signed. The union was called to meet Mr Tata to his move and that of Tata Sons. The union subsequently issued a statement that their relationship with the management of the Company had taken a downward trend over the issues. This irresponsible action of galvanising the union and acting prejudicially against the interest of your Company may jeopardise its future and impact the overall morale of our workers and employees of Tata Motors. It is now a matter of conjecture as to whether this agreement will be signed or not.

I have raised the issue on the actions which I believed to be inappropriate and in violation of the SEBI Insider Trading Regulation by the Promoter Tata Sons and the Trustees of the Tata Trusts: as also the manner in which they have and continued to influence and direct the affairs of your Company. A role that is solely the responsibility of your Board.

I have tried to ally your doubts and fears that you the Shareholders may have with regard to the notice of Tata Sons seeking to intimidate you in respect to the Tata Motors brand and financial support alluded to, both of which are untrue.

Most important of all I have tried to bring to your notice that the issue before you is not about removal of Nusli Wadia, but the very independence of an Independent Director and his ability to perform his fiduciary duties and the responsibilities without fear or failure.

The ability of a promoter to remove an Independent Director through the brute force of its holding in an ordinary resolution on which it can vote is a serious and major dichotomy and contradiction that need to be and must be addressed urgently. Two respected Jurists have opined according. I have provided their Opinions to the Government, Department of Company Affairs and to SEBI for their consideration.

Independent Directors are your custodians. They chair the Audit Committee and the Nomination & Remuneration Committee, which are directly accountable to you. If they can be removed at the whim and fancy of a promoter then their role will be reduced to that of 'yes men'.

It will no longer protect them from addressing issues as fiduciaries accountable to all the stakeholders, most important of all, you the Shareholders. They will be left with the option to either toe the line, resign or face removal as I do.

What is at stake now is not whether I am removed or not but the fate of the very institution of the Independent Director that has been created in law and by SEBI to safeguard the interest of all stakeholders.

It is in your hands to vote with your conscience for what is right for your company and more important for the institution of Independent Directors.

I have chosen not to attend the meeting as I understand that recent meetings held of other Tata Companies have been inappropriately and shamefully stage managed by the requisitionist controlling the entry into the hall as also in the selection and choice of speaker as never before seen in Indian Corporate history.

In keeping with good Governance and natural justice, I have forwarded this letter to the Company Secretary to read it out to you my Dear Shareholders. It is for him and the board to decide whether they wish to allow him to do so.

With my best wishes, 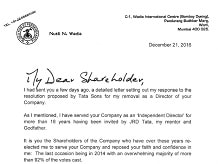