About a dozen new cars have been launched in the last 12 months, but four - Creta, Baleno, Brezza and Kwid - have raced past the 100,000 bookings mark.

Together, these now account for 14 per cent of the sector's total sales.

These also demonstrate how the sector has changed over the years. Not very long ago, even the most popular launches took 18 to 24 months to hit this milestone.

Young buyers willing to frequently replace older models with newer ones are boosting bookings and sales, according to experts. The market has also expanded.

This has also created exciting challenges for car makers.

When Hyundai launched its sports utility vehicle (SUV) Creta in July last year, it had planned to produce 6,500 cars every month. Soon, however, it had to raise the rate of production to 7,500 units.

From January this year, the SUV is being produced at a monthly rate of 10,000 units. About 92,000 units have been delivered to domestic buyers.

"The market for cars is getting bigger every year. The sector doubles sales every six years," said Rakesh Srivastava, senior vice-president (sales and marketing), Hyundai.

He added: "The customer confidence in certain brands is high. They don't wait for review - hence, Creta and i20 Elite became instant hits."

Of the four frontrunners now, two are from Maruti Suzuki, the largest car maker in the country. Its premium hatchback Baleno has got bookings for 121,000 units. About 75,000 units have been delivered to domestic buyers and many are in the queue.

Launched during the festive season in October last year, the vehicle has a waiting period of up to eight months.

Maruti's other new product, Brezza - an SUV, launched in early March this year took a little over four months to clock bookings of 100,000 units.

About 25,000 units of Brezza are estimated to have been delivered. 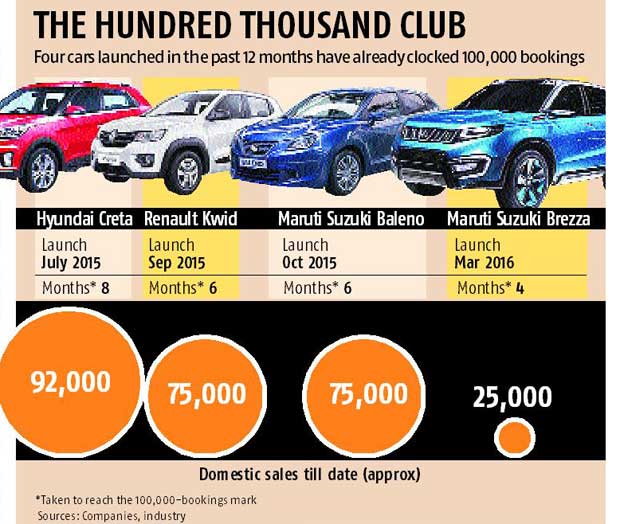 "The ownership cycle of cars is changing rapidly. More and more people now own cars for three to five years and then go for a new one," said R S Kalsi, executive director (marketing and sales), Maruti Suzuki.

He added: "The average age of buyers is going down. They are open to experimenting and buying new cars. They are guided by trust offered by a manufacturer and novelty in a model."

French car maker Renault took the entry segment car market in the country by surprise with the launch of the hatchback, Kwid.
Its unique styling helped Renault clock bookings of over 125,000 units till date.

A total of 75,000 units (approximately) have been delivered.

"In case of Renault, Kwid worked because it came as a disruptive product in its segment. Its SUV look made it an instant hit in an otherwise conservative segment," said an industry analyst.