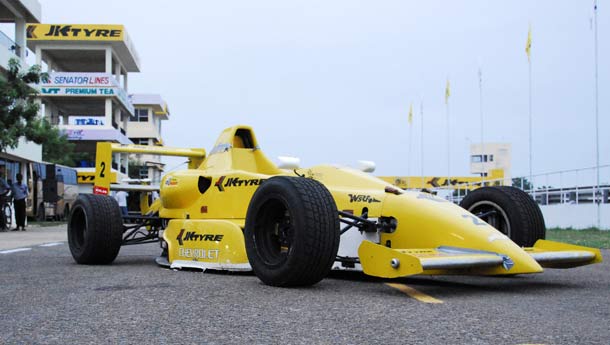 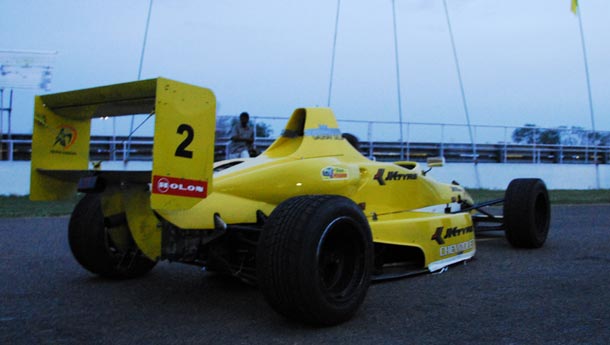 How many of you can boast of a boss that instructs you to go down to a race track at the far end of the country to drive India’s first race car, all because you’ve got yourself a new pair of driving shoes? I sure as hell can. Besides, Srini having family commitments, Pablo faking an outing and Shumi being just plain lazy were a different story altogether.

So there I was, sitting in the airport lounge, helmet in hand, loudly mimicking a race exhaust. ‘Could you please be quiet?’ the gentleman beside me politely asked. ‘I’m sorry, but I’m really excited because I’m going to drive India’s first proper race car today’ was my reply. ‘So what should I do?, he yelled back. Some people will just never get it, but for those of you who do, here’s what I’m talking about – the Formula Rolon Chevrolet racers.

Now these cars, considered to be the acme of circuit racing cars in the country, were introduced into JK Tyre’s National Road Racing Championship earlier this year. They’re powered by GM’s Chevrolet Optra engines, shod with the finest JK tyres and built in a small workshop near a town called Chettipalayam by none other than B Vijaykumar, managing director of LG Balakrishna and Brothers, the owners of LG Sports. They are the same guys, as you might recollect, who rolled out the Formula LGB cars a couple of years back to spice up the racing scene in India.

Down the years, many Indian drivers jumped out of these cars to race abroad in bigger, more complicated machines, but they were left as clueless as IAF pilots who moved from their Suryakirans to fly those infamous MIGs. The main aim was to take racing in India to the next level and allow drivers to be more involved in the setup of their car. The Formula Rolon Chevy cars are based very closely on the Formula Asia and Formula BMW championship cars, which means they have, for the first time in the country, active aerodynamics, inboard mounted suspension, dog boxes, in-car telemetry and it’s all MADE IN INDIA.

I’ve been promised by the guys at GM that I’ll be able to get into a car at the end of the race. So, like a kid about to get a double scoop of chocolate chip, I saunter around pit lane waiting for the race to finish, psyching myself that I’m not about to drop that cone down...  er, I mean crash the best racing car India has ever produced. Race over, and the GM guys introduce me to B Vijaykumar, a soft- spoken gentleman who’s the brains behind these cars. He asks me to put on my racing suit and my helmet and to get in to his Formula Hyundai (see box), but very politely says that the Chevy racers cannot be driven as they still have a few rounds to go in the championship. My bubble went pop as I now had to search for a racing suit and a car, while the sun seemed to set faster than I’ve ever seen.

I donned a bright blue Sparco (thanks to Akbar Ebrahim) and waited by the pit wall for my turn to get into the championship- leading car that is owned by Wallace Racing and driven by Gaurav Gill (thanks again to the persuasive skills of fellow journalist Bertrand D’souza). Bertie pulled into the pits to put the butterflies in my stomach into turbo-mode. Before I can even blink, I have people yelling a number of instructions to me, three distinct clicks (the harness in place) and I’m good to go, with not a clue about what to do next.   Okay, so I remember them saying dog box, which means this car’s got an unsynchronized gearbox and gear changes will need me to match the engine revs while shifting. This is a skill that the racing drivers would have mastered, but me?  It also means first gear is redundant and you can get off the line in second. Press the starter button and the Chevy’s 1599cc powertrain roars to life. It’s got a precisely tuned exhaust that makes ‘freaking loud’ an understatement. Standing in the pit lane, you could literally, and I’m not lying, hear the car at the far end of Sriperumbudur, which is by no means a small track. Now, this car puts out a hundred odd bhp which is just like the road-going car. This ensures that there is no unfair advantage in the series. On the other hand, it weighs in at about 500 kg and has a re-mapped ECU, which revs to about 7000 rpm, which makes it clock about 225 kph. About time you let the passengers out, don’t you think?

I had better get going, because we’re running out of light and time and they didn’t slap headlights onto this car. Blip, second and release and I’m off screaming down pit lane. Screaming in my helmet, that is. The track’s got these long sweeping corners, except for C2 and the one leading to the bridge ,and the last time I fought with a single seater around every corner, it was a Formula LGB. This car, on the other hand, had felt more manoeuverable, it felt like it wanted to go racing and faster. The inboard mounted dampers do that to the car by reducing its unsprung weight, making it easy to go around those bends.

In the driver’s seat, you feel like you’re sitting in grandpa’s old armchair connected to a massager that’s in hyperactive mode. The steering feels just right, with small inputs directing the car exactly where you want it to go. A flick of the wrist is enough to engage the next cog, provided you got the revs matched right. All in all, it’s a simple car to drive, until you start going faster. The scenery is in your face, your brain’s asking to look for the apex while you left foot is jabbing the clutch and your ears are searching for the right note to shift down. Wow, that was hard. Five laps were enough for me to hang up my overalls and retire from racing. It was the championship winning car and my last single seater outing was fresh in my mind. So there I was, sitting on the pit wall in those race overalls, wondering why these race car builders didn’t design our road going saloons. They’d be loud, uncomfortable, have wind for music and enough place to just about squeeze your boots in. But they’d be stonking fast, just like we bloody well like it.

Special thanks to Vicky Chandhok for allowing us to use the track, Gaurav Gill for the car and Akbar Ebrahim for arranging a racing suit at such short notice.