Ford Motor Co. is set to transfer most of its assets in India to a joint venture with Mahindra & Mahindra Ltd. after failing to make meaningful inroads for more than two decades in the world’s fourth-largest automobile market, people with knowledge of the matter said.

Mahindra, one of India’s largest automakers, will own 51 per cent of the new entity, said the people, who asked not to be identified discussing the confidential plan. Ford will get equal voting rights and board representation, one of the people said. The venture, to be announced as soon as next week, doesn’t include Ford’s global business services division or an export-focused engine plant in Sanand.

Ford’s compensation is likely to be far below the $2 billion it’s poured into India, only to achieve market share of less than 3 per cent. The deal keeps Ford in the heavily populated market while letting it share the financial burden with Mahindra. Ford Chief Executive Officer Jim Hackett is leading an $11 billion restructuring and paring money-losing overseas operations.

Ford is “insulating themselves a little bit,” said Deepesh Rathore, an independent automobile analyst based in Bengaluru. “For Mahindra, it makes sense, because they are increasingly looking at the urban market.”

Global carmakers have had a tough time making inroads into India, which is dominated by Suzuki Motor Corp.’s cheap, fuel efficient vehicles. General Motors Co. scrapped a $1 billion investment in India two years ago and stopped selling Chevrolet models there. The market as a whole faces challenges, with sales contracting for the past 10 months, forcing the industry to cut production and jobs.

A final agreement hasn’t been reached and the discussions could still fall apart, the people said. Reuters reported some elements of the venture in April.

Mahindra shares fell as much as 4.3 per cent to Rs 535 Wednesday in Mumbai. Ford shares closed 0.6 per cent down on Tuesday. 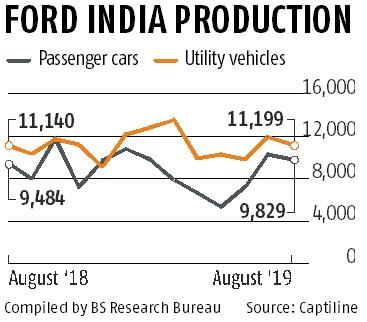 
As envisioned, the new entity will hold most of Ford’s assets in India, including the two car plants it owns in the country. Ford was one of the first automobile companies to enter India when it liberalized the economy in the early 1990s. Ford first entered India in 1926 but shut down that operation in the 1950s.


“Ford remains committed to growing its customer base and product portfolio in the world’s fourth-largest automobile market, and will continue to make in India, for India and the world,” Lori Arpin, a spokeswoman for the Dearborn, Michigan-based automaker, said in a statement while declining to discuss specifics. Mahindra declined to comment.


The deal will allow Mahindra to sell some Ford vehicles in developing markets under its own brand, the people said. Ford and Mahindra also are jointly developing a mid-sized sport-utility vehicle for India.


Back in 2012, Ford had aimed to make the South Asian nation one of its three largest markets by 2020. Most global carmakers have failed to win over buyers in the notoriously price-conscious market led by Suzuki’s local unit, Maruti Suzuki India Ltd., with its strong network of dealers and ubiquitous repair shops.