Ford has teased its upcoming next-gen Endeavour (known as Everest in the neighbouring countries) online. The SUV is scheduled to make global debut on 13th of November in China. It is developed by Ford Australia for the Asian markets and is based on Everest Concept which was showcased at several motor shows earlier (see the Everest Concept in pictures). The SUV is likely to enter in India next year and will replace the current model. Launch is expected after the introduction of next-gen Figo and its twin compact sedan (early next year) in India. 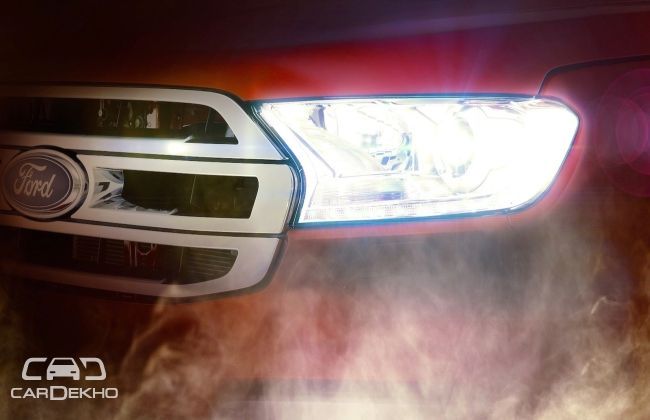 Speaking of the design, the next-gen Endeavour/ Everest has taken a leap forward when it comes to appearance. Gone are the boxy old-school looks, the impression is now trendy, streamlined and modernistic.

Apart from these changes, one more thing you will instantly notice i.e. the spare wheel now sits underneath the body compared to the rear mounted one in the current gen model. Adding on the interiors, the SUV is reportedly getting inspiration from the Ford F-150. Moreover, expect SYNC 2 touch screen infotainment system along with AppLink connectivity and Ford Emergency assistance on-board.

Below are the Interior of Ford F-150 from which the next-gen Endeavour borrows inspirations.

Mechanically, the Everest (Endeavour) is expected to get upgraded engine from Ford Ranger - 2.2L (4-cylinder) and 3.2L (5-cylinder) TDCI units. Speaking of our Endeavour, Ford India could chip-in this 2.2L TDCI unit while the 5-cylinder 3.2 liter is still doubtful. Instead of it, company might retain the 3.0 liter 4-cylinder motor which is currently working in Endeavour. As per the transmission, the current Endeavour offers 5-speed manual unit along with automatic. The next-gen Endeavour is likely to get 6-speed manual box along with updated automatic unit.