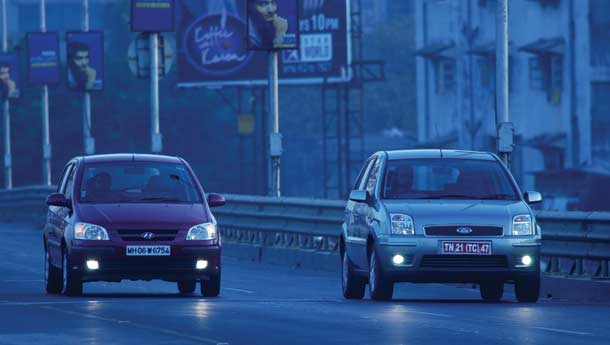 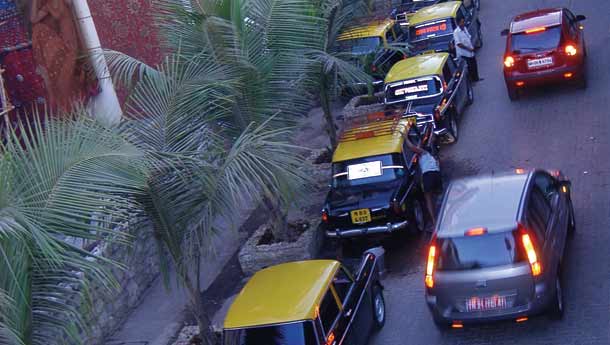 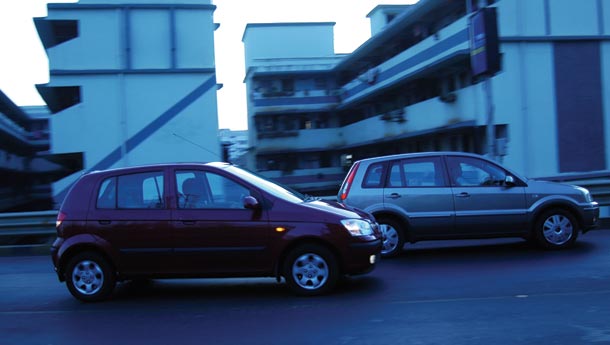 If you have leafed through our last issue, you already know how much we love the Ford Fusion. Also, you couldn’t have missed the fact that it was beaten to the holy Car Of The Year 2005 grail by the Hyundai Getz. If you were careful you would have noticed that one of us, Srini to be precise, bought a Getz after paying 5.4 lakh big ones. Confused? We are ready to forget our personal preferences, automotive sex appeal scores, spine-tingling performance figures and make the decision for you – if you are about to put your money on one of the two machines, which one would it be? Why beat around the bush – is the Fusion worth the additional lakh or so Ford demands for it? Let us find out.

Looks
If the Getz is new age, the Fusion is from another planet. Both are grown up hatches primarily meant for Europe, but the Fusion is the younger design and it shows. New pedestrian safety standards mean both cars get a butch nose each with the Fusion emerging smarter. That said, there was room for flair on both cars and it looks like the designers were kept on a tight leash.

In profile, the Getz is just another flat surface while the Fusion shows a glimpse of concept car panache especially around the greenhouse. And yes, we appreciate that additional quarter glass just for’ard of the D-pillar. The mini-SUV stance of the Fusion emerges when seen side-on too. Rear three quarter, both cars look great, with the metal-folded surfacing of the Getz looking more sophisticated than the traditional X-mas tree tail lamp architecture that numerous cars from the Fiat Punto to Tata’s Indica have used.

Overall the Fusion comes across as the more expensive and carefully-built automobile, while the Getz is another modern mass produced machine. These are reasons to justify shelling out more money for the Ford. So round one to the Fusion.
Getz: ***
Fusion: ****   Interiors
The Ford’s interior is better designed as well as better appointed. The Getz’ decor, on the other hand, is basic but better executed. Ford lost the plot with the quality of plastics used, while Hyundai has managed to do everything well. The Fusion has more cubbyholes than a Godrej safe and you are certain to be left wondering what to put where. While the idea of a rear seat console that can be stashed in the boot sounds and looks noble, it was a pain (we had the Fusion Plus version – the simple solution is to keep the console at home when you are traveling with a full quota of passengers).

As far as ergonomics go, the Getz is on par or even better than the Fusion. There are a few left hand drive to right hand drive conversion issues with the Fusion – like the lack of space on the foot well, which nags you in day-to-day life. As far as acoustics go, the message is loud and clear, Ford is a clear winner. So  the points that Ford earns for the innovative interior are somewhat negated by the spacious cabin given the Getz’ external dimensions and the quality execution. We have a tie at this point, ladies and gentlemen.
Getz: ****
Fusion: ****

Powertrain and performance
No sir, the Getz need not apply in the performance game. The Fusion, with that 100 pony rev-happy motor, wins the enthusiast over in no time. Alright, we were not supposed to look at just enthusiasts here. In the daily grind, we found the Fusion to be a bit too eager and hence it lost points on the fuel economy front. The Getz, on the other hand, is calm and takes the pressure out of driving; it almost pilots itself! The 1300cc motor is refined and reliable and is mated to one of the slickest five speed gearboxes in town. It only develops 82 bhp at 5500 rpm and is not exactly quick, nor very fast. What it does well is cruise at say 80 kph and return a most welcome 14 kpl on a consistent basis (not in thick Bangalore-type traffic, mind you). Get out of town and the Fusion is the car to have, as the bigger 1600cc motor generates lots of torque pretty early on, and that is good news for quick lift-offs and genuine 170 kph performance.

Throw in some winding roads and the Fusion can be spelt F-U-N. The downside is an appetite for liquid gold – it can go down to 10 kpl if you are really lead-footed. The test car came with ABS and that meant sure footed, straight line braking that completes the performance package. You do get ABS in the Getz, but it’s an option, and you have a month’s waiting period for deliveries.

To sum up, the Getz powertrain is all that you need if you are going to use your car for taking you to work and dropping the kids. But if inter-city driving and the compulsory weekend run makes up your life then the Fusion has the right powerplant and the consequent performance edge.
Getz: ****
Fusion: *****   Ride and handling
Being an ‘oversquare’ (well, it is kind of square to look at) automobile, the Getz occupants do get tossed around when subjected to bad terrain. However, the ride on smooth tarmac and cement is,  well, smooth. The Fusion rides better on most surfaces and is certainly the better handling car between the two. We threw these machines around some nasty corners during our COTY evaluations and none could upset the composure of the Fusion. It does have a dislike for rumbler strips, where the rear-end tends to get sideways.

Both cars have independent set ups up front, but the sure footed nature of the Fusion is thanks to a sub-frame that pins down its suspension bits – thereby giving the car a certain degree of sharpness when driven aggressively. At the rear, both cars use a time tested twist-beam (torsion bar in the case of the Getz) rigid axle set up which can be termed semi-independent if you are in a good mood. Again, the Getz has got what it takes to handle city streets, but the Fusion feels better in comparison at all speeds snf on all surfaces.
Getz: ***
Fusion: ****

Verdict
The top end model of the Getz will set you back by Rs 5.4 lakh while the Fusion Plus that we tested retails for a cool lakh more (the base models will be cheaper, still there is a significant difference of about Rs 60,000). The Hyundai Getz won our COTY evaluation because it consumed less fuel and was cheaper.

In this one-on-one comparo though, there can be only one winner and that is the Fusion. If you ask us, it is a whole lot of money to be spent on a big hatchback but the Fusion begs to be called a mini-SUV with immense vacation, if not go-anywhere, capabilities. Buy one and make merry if you can afford the difference. If not, you can always emulate Srini and buy the Getz...and commute everyday.