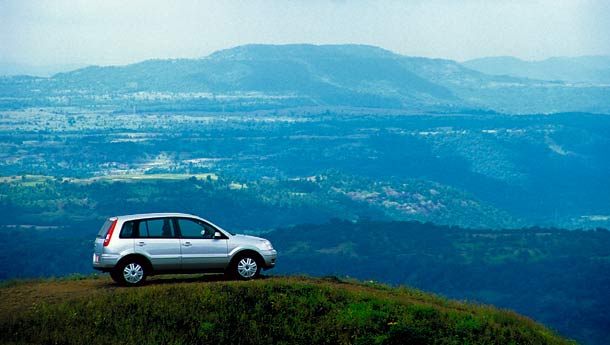 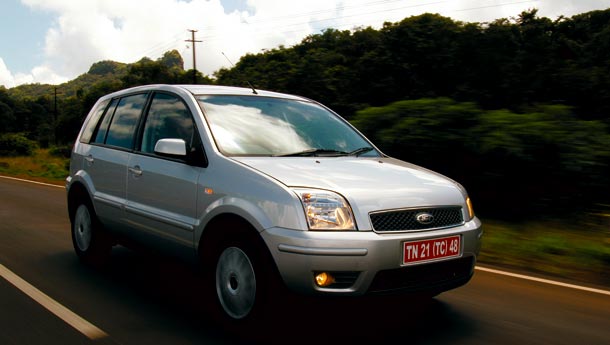 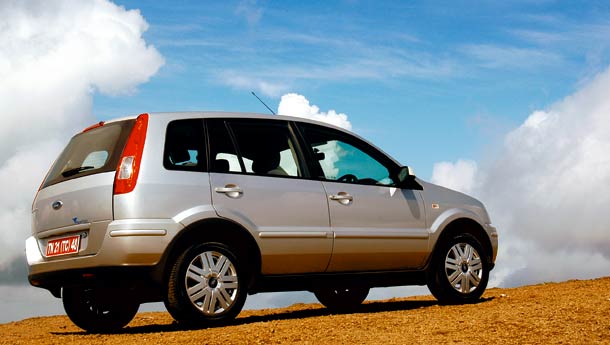 Ford calls their new Fusion an Urban Activity Vehicle. Hmm, now what sort of urban activity do I normally do with a car? Commute, park, commute, park, commute, park... Okay, it’s not that bad. I also listen to music while I commute and park, and sometimes for entertainment, I abuse some cabbies while commuting and plead with parking attendants while parking.

Ford’s marketingspeak notwithstanding, I don’t know about you. I can’t think of any other automotive urban activity that I usually indulge in – I don’t know about you. So I decided to take this UAV out of the U it’s supposed to thrive in and hit some brilliant, curvy roads instead. I also threw in some sharp hairpin bends and the fast Mumbai-Pune Expressway for good measure. All to get a good idea of Ford India’s forthcoming new product. Here we go.

Confusion
There’s a reason why this vehicle is called the Fusion. It’s suppose to meld the presence of an SUV, the driveability of a sedan and the functionality of a UV. So while in pictures it looks imposing, in real life, that’s not the case – it’s just marginally bigger than the Hyundai Getz. That, by the way, is a compliment. I like the size of the vehicle, it’s small without being defensive and large without being offensive.

The front end is blunt and rounded off – I guess pedestrian safety norms were a deciding factor. Those so-called lozenge headlamps are similar to what you see in the current Toyota Land Cruiser, and serve to show the edges of the vehicle at night. Viewed in profile, the Fusion looks tall but actually isn’t – it’s somewhere between the Palio/Indica and tall-boys like the Santro/Wagon R. Which makes it proportionate and less ungainly to look at than the tall-boys, yet offers decent headroom and allied advantages. The wheelarch line runs along the length of the body and is prominent enough to give it that butch SUV look. The 15-inch rubber adds to the effect. The tall taillamps running along the C-pillar are now almost stereotypical and the numberplate tucked way leads to an eyeful of bare sheetmetal. Except for the rear view, the Fusion looks quite refreshing on our roads.

Inside, it’s a mix of classic Ford with Euro touches. For instance, the steering wheel is like the Mondeo’s and so’s the switchgear. The overall layout is Euro chic – it’s simple, uncluttered and neat – and the headlamp/foglamp dial placed on the dash, to the right of the steering wheel is typical of all European cars. The spherical aircon vents, however, evoke sporty Fiats and Alfas and are fun to play with. The instrument console, with twin large counters, is contemporary and the digital fuel gauge, temperature, clock and trip meter even more so. I am not sure about the gear lever and its base though, it reminds me of the air bellows used while working metal. The dash, like all modern-day cars, stretches well into the blue yonder, but vision of the opposite end of the bumper is not hampered. Ford has used the depth of the dash to create suitcase-sized storage spaces. I am sure we will find something or the other to keep inside. A Maharaja Mac with a large Coke already comes to mind... oh, now I understand the A in the UAV.   Looks like Ford’s Small and Medium Vehicle Centre at Dunton in the UK and at Merkenich in Germany have done overtime to make the Fusion’s insides as liveable and useful as possible. Our test vehicle was the Fusion+, which meant it was completely loaded. For instance, there’s stuff like headlamp level control, seat height adjustment, steering wheel tilt adjustment, electric internal controls for external mirrors (now that’s a mouthful), front and rear 12V power outlets, and a whole lot of other stuff which I recommend you unearth at your neighbouring Ford dealer. What however deserves a mention is the front passenger seat which can be lifted to access a storage area and the 40:20:40 split rear seat. In various permutations, you can customise the rear seat based on your needs. Then there’s also a godown-like central storage console that can be again used for the abovementioned Macs and Cokes, toothpicks, gas tablets, antacids and stuff. The whole console can be removed, tucked inside a customised bag and thrown into the boot. After polishing off the Mac, of course.

Profusion
Inside the stubby bonnet is a four-cylinder engine featuring aluminium alloy construction. This DOHC 16-valver displaces 1596cc, producing 100 bhp at 6500 revs and 14.6 kgm of torque at 3400 rpm. Transferring it to the front wheels is a five-speed manual transmission, an improved version of the Ikon’s own gearbox. On paper, the specifications seem quite right. And on tarmac too, they seem right.

The Duratec unit is compact and light, and having been developed in Europe, shows its typical characteristics. It’s refined and quite noiseless generally. At low rpms, the Fusion will happily putter around, as the torque peaks at an easily approachable 3400 revs. But once you give it the stick, the Fusion reacts with a full-throated growl. You wonder if you are sitting in the same vehicle after all. After the initial surprise wears off, you end up whipping the car around just to hear that sporty exhaust note. The cable-operated gearshift, however, dampens the spirit as it’s notchy and you end up messing your shifts while driving with enthusiasm.

For a hatchback with a zesty 1.6 litre16-valve engine, that too with responsive drive-by-wire throttle control, the Fusion’s not all that quick. That’s because it’s still a short tall-boy (or a tall short-boy, take your pick). It touches 60 kph from standstill in 5.6 seconds and 100 kph is attained 12.7 seconds. But the Fusion’s strongest point is its mid-range – 80 to 120 kph is dismissed well within 10 seconds, 9.3 to be precise. This kind of mid-range allows you to overtake safely. On the highway, its 14-second timing to reach 140 kph from 100, will be appreciated – though not quick, it’s not all that bad. We managed to nudge the 180 kph mark on the speedo during our top speed run.   However, the most impressive display of the Fusion’s prowess is when we tested it for straight-line acceleration and braking, in our 0 to 100 kph to 0 run. Here, the Fusion posted a decent 17.3 seconds, which is not exceptional. What impressed us is that it never lost its composure, coming to a halt in a straight line without a flutter. Please note, in this test, we reach 100 kph as quickly as the car can and then slam on the brakes, as if our life depended on it. Even after repeated tests, the Fusion performed consistently, without locking its brakes or losing its cool, when most cars would usually give up after one or two attempts. The reason for its confidence is its non-invasive, non-intrusive ABS – we heartily would recommend it to all Fusion buyers, in case Ford’s offering it as an option.

Transfusion
The Fusion, as you might have gathered, is based on the Fiesta platform. No, not the old one on which the Ikon is based, but the current good-looking, contemporary version that populates European roads today. Which immediately grants it a higher level of ride and handling strengths – diminutive outside, but with the characteristics of a large sedan.

The independent suspension setup in front comprises McPherson struts with coil springs and dampers. The McPhersons in front are mounted on a subframe, which also assists the lower A-arms and the steering rack. The advantage of having a subframe is that it takes most of the brunt of bad roads and allows for better steering precision. And at the rear, a semi-independent twist beam with coil springs and dampers do duty. For India, the ride height has been increased. On bad roads, the Fusion rides well, pretty much absorbing what lies below the rubber. The rear ride quality is acceptable, without being too fashionably stiff (seems to be the trend nowadays, no?), but the front seats are the better places to be in.

With the engine singing lustily, the Fusion revels on curvy stretches and handles like a proper hot hatch. In fact, it oozes confidence, and prods you on to attack the next curve with more and more gusto. What adds to the Fusion’s overall handling confidence are its 195/60 R15 Goodyear GT3 tubeless tyres and good looking seven-spoke alloys. The Fusion dismissed one hairpin after another and is great fun without being hairy. You have to keep its engine on the boil to enjoy what it’s capable of. Of course, it’s not recommended if you have your family in the back seats, those McShakes will be all over the car.

Diffusion
Overall, the Fusion is a great car to do both your city and highway duties, with a little bit of a hot hatch thrown in for those family men-enthusiasts amongst us. Not just that, it will keep your family happy with all those little storage bins here and there, and keep them safe too. It’s a modern and comprehensively engineered automobile with clever thinking built into it. Okay, it’s yet to be launched, but indications are that this fully loaded Fusion+ will retail at approximately Rs 6,50,000 – it may seem steep, but it’s got everything you’ll need, except a boot and a worthwhile urban activity.