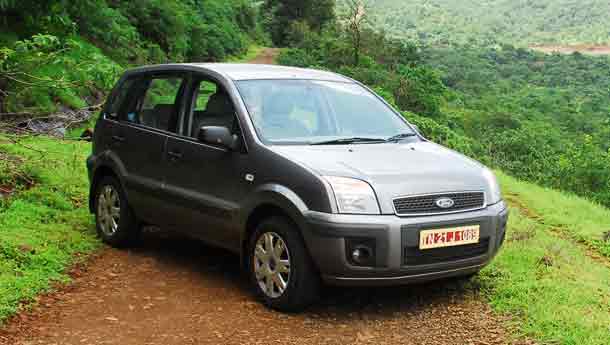 Sadly, not many cars for less than ten lakh rupees make your hair tingle. And not many engines do. But one that does is the 1.6 Duratec in the Ford Fusion. It’s so responsive and so willing to leave a trail of rubber on the tarmac that you wonder why people even bother tuning their engines and try to pump out even more horsepower. It’s that precise short-throw gearbox, that lovely steering that responds to every input and the high speed stability of the car that make it such a complete driver’s vehicle.

Unfortunately, it is also the year of the diesel, the year when people have discovered torque over horsepower and greater mileage capabilities than ever before. That too, without too much of a compromise on performance. And since Ford do have their record breaking 1.4 Duratorq available, they decided to drop it into the Fusion and sell some more of the brilliant crossover that has been somewhat of a slow mover.
It wasn’t as easy as they would have liked. Our bureaucrats made the job a tad difficult, rendering the Fusion just outside excise benefit. So the R&D team at Ford’s Chennai plant immediately took a filer, shaved the bumper off by 3 cm to fit inside the 4-metre restriction and had the Fusion diesel ready for us to test and you to buy.

I have been quite a fan of the Ford Fusion concept. A crossover based on a car platform with 15-inch wheels, reasonable space, clever seating and a great ground clearance, it has all the ingredients for a sensible and practical adventure vehicle. So with a diesel engine, the mating of the two concepts makes for a very compelling buying decision. At least on paper. So how does that translate in real life?
You hit the road, what else. Around town, the Fusion TDCi is in its element. Given its compact dimensions, the diesel is not very different to drive compared to the version that drinks unleaded. The steering feels a tad heavier than the petrol, but has more feel due to the extra weight of the diesel engine sitting between the front wheels. Weighing in at 1,180 kg, it is about 70 kg heavier than its petrol sibling and 30 kg heavier than the Fiesta diesel sedan. Sixty eight horses to move such a mass might seem inadequate, given how some smaller diesels make more power, but it is not so much of a problem. With 16 kgm of torque available at 2000 rpm, the torque rating too is the same as on the Fiesta diesel. There’s not much difference in real world driving performance, when you potter around at sub 3000 rpm levels, the kind of speeds one does under most conditions. It pulls away calmly, just the way the 1.4 TDCi has been doing in several thousand Fiestas on the road. For whatever it is, it is a very refined small diesel engine. The Fusion might not have as much sound deadening as the sedan, but it still feels quite smooth as the various parts move around under the hood. A well lubricated unit with a short-throw gearbox and you have some of the reasons why rivals have found it very difficult to remove the Fiesta diesel from its perch. Which is good news indeed for the Fusion.

On the highway, the car felt unstressed as we cruised along just below 2000 rpm. Though once I nailed the throttle and the car crossed 90 kph, it tended to feel unwilling to get to serious speeds. From there onwards, till the top speed of 160 kph, it was a bit of an effort. For a 1400cc diesel engine, it feels a bit lacking on horsepower, crucially on torque. The Fusion diesel was a great opportunity for Ford to make the oil-burner more exciting, and I for one would have liked to see more torque lower down. For instance, the Suzuki Swift diesel produces 19 kgm of torque at a couple of hundred rpm lower, which makes it quite a blast to drive. In the Fusion, the lack of torque necessitates more downshifts to build up momentum. The large frontal mass coupled with slightly different overall gearing too makes the Fusion a bit sluggish over its sedan sibling, with 100 kph coming up in 17.87 seconds, some 1.5 seconds later. Some tweaking around with the ECM and turbo boost pressures would really have done wonders.

But there’s no arguing with the Fusion’s underpinnings. We took off on an interesting road that had its own set of variations, from tarmac to gravel to slush and a pre-tarmac base made of small rocks. Through all of it, the car held up very well, the re-worked dampers at the front making the ride a bit plusher than the slightly hard edged suspension settings on the petrol. It also meant that the interior trim was less susceptible to working itself loose and should hold on for thousands of kilometres of abuse. Since we didn’t have to spend time holding on to fallen plastic parts, we could lay one eye on the road and the other on the interiors. Those who have driven the pre-facelifted Fusion would remember the tacky finish on the plastics and its tendency to fade off in the heat and grime of our conditions. By sharing some bits with the Fiesta and improving the overall quality, the current Fusion feels like a much better place to live in. The rubber-like criss-cross weave finish across the top half of the dashboard and minor changes to the upholstery and other bits have considerably changed the overall appearance on the inside. Grabbing hold of the steering also is a wonderful experience, with good use of materials and well designed points to place your thumbs. It takes a while to get used to the driving position, where you sit slightly higher and you sit on rather than in those seats, so some amount of additional cushioning here could have helped.

The 300-km loop around Mumbai and some city driving later, some points came to the fore. One, at 16 kpl overall with the aircon running all the time, the Fusion diesel is nearly as cheap to run as the Fiesta diesel. It is not too quick at high speeds and could do with some more oomph, but for all its practicality and sensible features, it is reasonably priced at Rs 6.59 lakh, ex-showroom Delhi – thanks to the excise duty benefit, no doubt. I though would still take the one with the 1.6 under the hood. No, not what you’re thinking – this one produces 90 bhp and nearly 20 kgm of torque, yet sips on diesel and is available internationally. Then there’s no confusion with the Fusion.