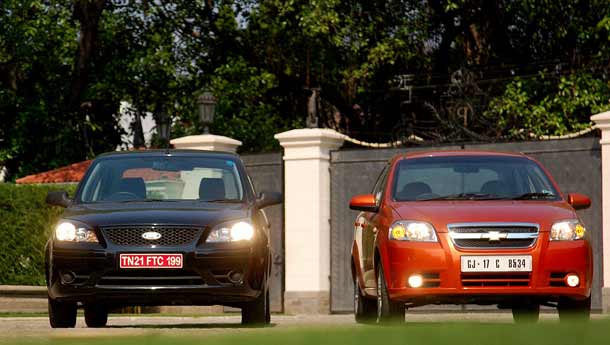 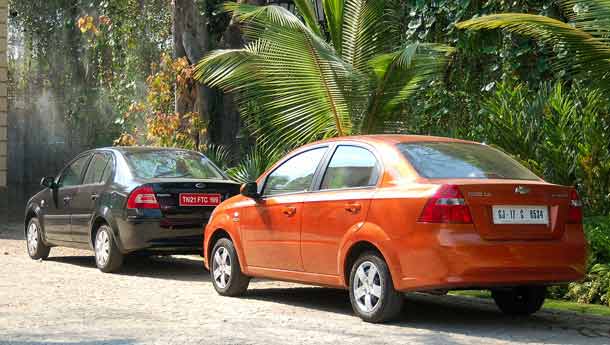 Given a chance, I would have written the Audi A4 vs Merc C-Class story that is somewhere else in this issue. I would have talked at length about legendary brands, front-wheel drive vs rear-wheel drive and how adept the new age Audi is in challenging the well-heeled C-Class. Alas, I have a rather difficult task o hand – to compare the newest cut-price sedans in the Indian car market. Yes, the cars that many of you may actually be driving rather than merely ogling at. Cars that are supposed to transport you to work, children to school and the entire family to hill stations during holidays. As motoring journalism goes, it is easy to get your judgement coloured and proclaim the Ford Fiesta 1.4 a clear winner over the Chevrolet Aveo 1.4 because it is more fun to drive.

Ah, I have said that already. It takes barely ten minutes behind the wheel of each car to understand that the Fiesta has a more modern and sorted-out chassis, a more refined and peppier engine and driving dynamics that make you feel good. The Fiesta 1.4 is so good at performing the tasks given to it that we at BSM have forgotten that there is an even more powerful version around.

But one late night, when I had to choose between staying in yet another hotel room or reaching home to the comfort of my own bed 200 km away, the Chevrolet Aveo 1.4 kept me company. How a single drive can change the mind. I had to dodge abysmal traffic in the wannabe Mumbai that Pune city is, find my way to the Expressway, counter Volvo drivers with swollen egos, handle a section of winding roads and counter more truck traffic as I reached Mumbai. Two hours and twenty minutes and a blinder of a drive later, I was admiring the orange car from the balcony of my home. So there. There is more to a car than the ability to remain true around corners, right? Read on...

Looks
The Fiesta looks traditional and good, while the Aveo looks new age and smart. Seriously, there is very little to choose between these cars when it comes to the exterior design department. You may like the Aveo and your wife may like the Fiesta kind of thing. A second look will reveal that the Fiesta looks that much more complete a sedan than the Aveo. Both cars are equally well put together, with the Aveo gaining the upper-hand when it comes to narrower panel gaps and attention to detail. The wrap-around rear lamps make it look contemporary too. Immaculate paint finish means the Fiesta has the potential to look fresher a few years down the line compared to the Aveo, though.
Aveo: ****
Fiesta: ****

Interiors
The Fiesta is about quality design and the Aveo is about quality materials. Essentially, both cars offer much more than what entry C-segment cars used to not so long ago. The all-black Fiesta interior is future-proof and has nice aluminium finished bits that lend it a superior air. The Aveo gets well finished dimpled plastic on the dashboard and a twin tone treatment that has been played very well except for the bit that reflects on the windscreen. The glazed-plastic interior garnishing is way better than the fake-wood stuff we are used to. The Aveo front seats are more comfortable for long distance driving while the rear seats of the Fiesta offer better support. Personally I prefer the Fiesta interior theme, but I also like the taller seating position of the Aveo which one cannot help but appreciate in the daily commute.
Aveo: ****
Fiesta: ****   Powertrain and performance
We are dealing with engines similar in architecture – both cars have four-pot units with double overhead cams operating 16 valves each. Like its bigger sister, the Fiesta 1.4 powertrain is an entertaining unit that lets the driver be part of the fun. On paper, you may have only 82 bhp and 12.95 kgm of torque to show, but on tarmac this car is able to translate that into a more involving experience. The Aveo’s 94 bhp/12.95 kgm unit, sadly, is not the same. It stunned the Fiesta by being quicker to 60 kph and 100 kph by stopping the clock at 5.57 seconds and 12.21 seconds respectively (as against 6.07 and 14.41 for the Ford), but even then, it is the Fiesta’s key that our road testers were after. To begin with, the Aveo’s four-cylinder engine has its rough edges and the issue is compounded by a gearbox that does not really communicate with the engine. Or so it feels, till you slot in a gear, any gear, mash the throttle and the Aveo manages to deliver the numbers. There are times when a motoring journalist is dumbfounded by certain engine-gearbox combinations and the Aveo certainly is one such. Seriously, it is like investing money in a dead stock and realising that it has worked wonders for your fortunes. That said, the Fiesta powertain feels more robust and durable all the while. So seat-of-the-pants feel versus outright performance is the question here, and though we are tempted to award this in favour of the Ford, we cannot.
Aveo: ****
Fiesta: ****

Ride and handling
Before you dismiss this story as a public relations stunt where we give four stars each to both contenders in every category, read the following... because we do have a clear winner in the form of the Ford Fiesta. The Fiesta is a natural handler that can make even average drivers look good. If you are the sort who likes to drive a car hard, then look no further and buy the Fiesta. Ride quality on offer from the struts-twist beam combination is excellent on good roads and more than agreeable on rough terrain. The Aveo rides well on almost all terrain but has a few soft spots in the handling department. The car is sprung a tad too softly  for aggressive cornering and because of this you enter a tightening corner wondering whether it will hold the line through. The natural understeer trait gets even more pronounced when you are charging through a series of corners with the exit line getting wider with each flick of the steering wheel. General Motors has given similar 185/60 R 14 rubber for the 1.4 as well as the 1.6 version, but there is a limit to the grip that even those Goodyear Eagles can provide. Compared to that, the less meatier 175/65 MRF ZV2K rubber worn on 14 inch wheels by the Fiesta felt far superior and complemented the dynamically correct
Ford. Both cars handled Expressway speeds (read straight line performance) with admirable composure.
Aveo: ***
Fiesta: ****

Economy
Both cars are available in different trim levels and price points. And what is ‘good value’ depends on which city you are buying it from and what trim you choose. While the Fiesta managed to return 12 kpl on our combined driving cycle tests (metro, suburban and highway), the Aveo was better, and managed a brilliant figure of 13 kpl. In congested city traffic, the efficiency of these cars drop but less so with the Aveo which has been fine-tuned for economy. GM has announced competitive prices for critical spare parts of the Aveo and Ford will have to try hard to match that. The overall economy game then is won by the Aveo, but by the narrowest of margins. But hey, Ford will sell you a frugal yet contemporary diesel version if you are really into stretching litres!
Aveo: ****
Fiesta: ***

Verdict
We are passionate about cars and we love driving, so we will have the Fiesta as the winner of this shoot-out, thank you very much. But we are also in the business of evaluating  and that means trying to understand if these machines meet the expectations of their prospective buyers. And in this regard you cannot discount the Aveo. If you intend to buy a chauffeur-driven car that looks ‘big’ but one that is not expensive to run, then the Aveo will satisfy you big time. And trust me, on a quiet night, it will impress you by taking you home briskly, the notchy gearshift be damned.