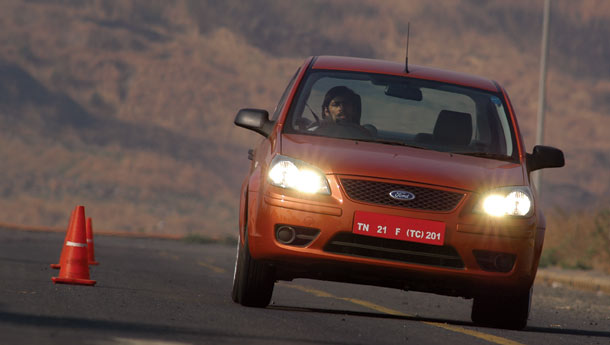 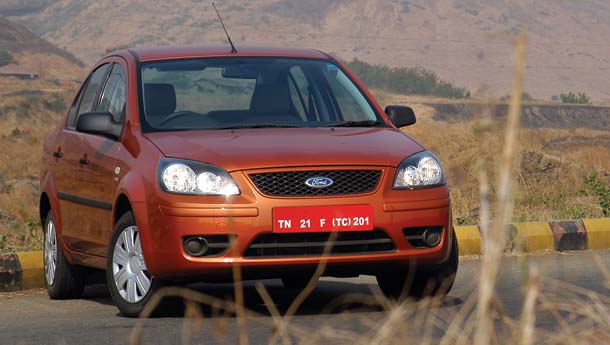 It’s rather surprising how today’s technology makes our lives so much easier and we hardly ever notice it. Take, for example, this Google Desktop software that Shumi uses at work. We keep cribbing about how it slows the machine down and logs in every single word we key in and, more importantly, it has these annoying pop up tips. Nonetheless, it helps you find files, pictures, music or even a particular word in some godforsaken file on your hard disk. It’s a pretty interesting piece of software that he says is indispensable, but none of us will ever understand it.

And somehow, for similar reasons, the Ford Fiesta finds itself on this interestingly mundane list. No, I’m not saying that the Fiesta’s a goner, (they’ve got Little B charming the masses) but it definitely isn’t going to do a Google and automatically intrude into your personal life. Let’s take a walk around the car to know why.

Ford decided to play it safe with the Fiesta. With everybody else leaning towards  contemporary European lines, Ford’s designers decided to go all out with the Indian theme and designed a rather conventional car that would appeal to the masses . Before I forget to mention it, Ford emphasizes that the car was only built for India. The styling is bland, unlike the well formed Ikon. The massive front grille looks purposeful, even more because of the gaping shut line of the hood, while the matte black surrounds around the headlamps are a different touch. There is a certain amount of design sense to the rear, thanks to those funky tail lamps, but then again it certainly isn’t the rear of the year.

Let’s get into the car now. As a self proclaimed music junkie (and fidget), the first thing I had a go at was the stereo. It put out some pretty decent sound for a face panel that’s simple, but my usual complaint still persists – no MP3 compatibility. Besides the stereo, the centre console sports three big air con control knobs that are easy to fiddle with and a neatly crafted cubby – and a number of blank buttons (which were filled with a clock on the 1.6) and a neatly crafted cubby hole. The round air-con vents are an iteration of those on the Fusion and are easily adjustable. Another hole in the 1.4’s armour is the dashboard, where the airbag is usually mounted. It has an empty space that looked like it was meant for an... er, airbag. The one thing that really impressed me in the Fiesta was the cabin space and leg-room. In fact, it was in this very Fiesta that my prospective mother-in law plonked comfortably into the passenger seat and didn’t crib about the groceries being crushed in between her feet.

I can’t sit around here describing the interiors and my extended family, so I’m going to crank her up and take off. Ford’s all-aluminium Duratec engine breaks into a muted idle. I guess it’s the extra layer of cabin padding that keeps the sound out. Engage first and we’re off. The Ford package is pretty up to date with an on-the-fly throttle, knock sensors and some sort of energy-management alternator (that takes an SAE paper to figure out) that quietly serves its purpose efficiently under the hood (like Google desktop in the background). Gear changes were  smooth with the cable assisted gear mechanism, although the lever seemed a tad high.   The 82 bhp out of the 1400cc 16-valve DOHC is a good 12 bhp below the Hyundai Accent and 6 bhp under the Opel Corsa, but the  power from the Fiesta seems just adequate. Driving the Fiesta in traffic is effortless, almost as if the engineers constantly keep inserting the required cogs into the Focus-derived ‘box as you call on them. Using the hydraulic assisted clutch in stop-and-go traffic feels like operating a touch screen with your toes, while the on the fly throttle adds to the experience.The one problem I faced while driving around the city were the wipers. They worked just fine, but the damn things swished across the windshield every time I made a turn and it definitely wasn’t my fault. I thought Ford was serious when they said the Fiesta was ‘Made for India’.

Enough about my rants in traffic, our proving ground numbers will give you a bigger picture. The Fiesta went from nought to 60 in 5.97 seconds, down by just a fraction on both the Esteem as well as the Ikon Flair. On the 0 to 100 kph run, the Fiesta clocked 14.09 seconds, a good two seconds behind Maruti’s ageing 1300cc package. I’m not sure that’s a big deal for an entry level sedan, but shouldn’t the Ford guys have ideally set benchmarks for the segment they were about to dive into?

I’ve got to tell you about the whine from the Duratec engine, only because on the test runs it made me believe I was going to have much lower times on the test sheets than I actually did. Floor the throttle and at about 5000 rpm, a muted growl breaks through the cabin insulation and makes you feel like you’re doing about 200 kph in a race car. The downside is that you’re so tuned into the sound, you tend to shift too high into the revs and well outside the powerband.

The Fiesta rides on McPherson struts with larger coil springs up front and a twist beam setup at the rear that allows for more boot space (for the ever burgeoning Indian family, perhaps). Shod with 14 inch, 175 section tyres, the Fiesta rides exceptionally well on good roads and takes bad roads in its stride, literally. Through the slalom, the car felt very confident and kept its composure through all the cones. The light, responsive steering made the car very flickable and had me pushing the car as much as I could. The disc-drum brake setup worked well, but if any of you go to a Ford dealership and take a test drive in an orange Fiesta with flat spotted tyres... well, it wasn’t my fault. Blame it on the ABS that Ford didn’t install (it isn’t offered as an option either).

So what do I think of the Fiesta? Well, on the face of it, not much. But for a sedan that is priced at close to Rs 6 lakh, you can buy a car that’s not as dated as the Esteem and that definitely has a more solid feel than the Hyundai Accent. If you are one of those who like to pass by unassumingly, yet knowing that you have spent your money well, take a look at the Fiesta 1.4. It has fantastic ride quality on offer and is almost as capable as the 1.6, if you can throw the time sheet away. In short, the Fiesta 1.4 is just like that Google Desktop software I keep telling you about. It’s out there doing its job diligently on our machine, but we hardly ever notice it. Someday, hopefully, we will.