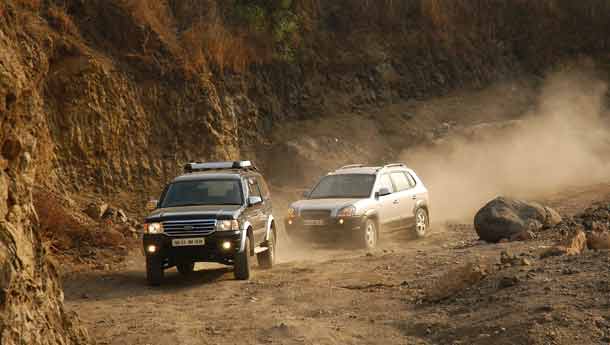 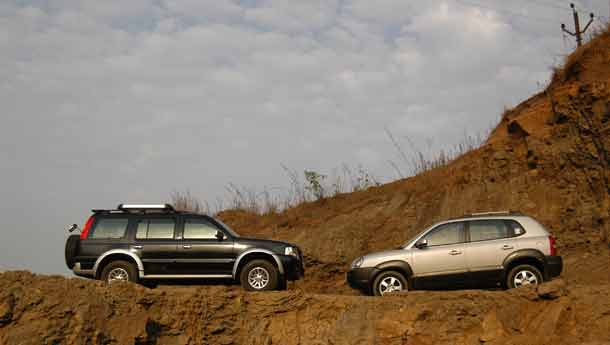 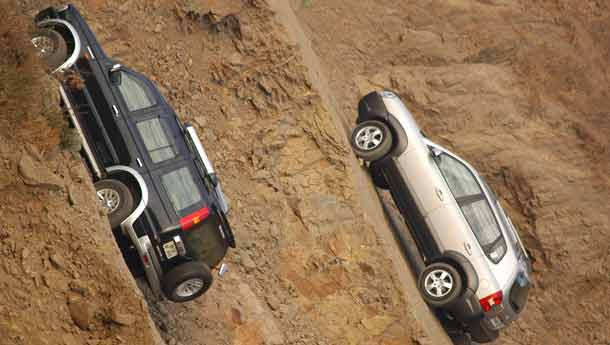 If anyone asks me which of the Rs 12-14 lakh SUVs they should buy, my answer would be the Chevrolet Forester. The Subaru on stilts wearing the Chevy plate, and complete with the boxer powerplant mated to a permanent all-wheel drive system, is simply the best on/off-road car money can buy in India today. I have given this suggestion to many, but most of them who nodded at me loyally are driving Ford Endeavours or Honda CR-Vs instead. Don’t ask me why. The quirky looks which sells Subarus worldwide has not been well accepted in our country, and unfortunately, even General Motors India has not pushed the case of the car that re-launched the Chevy bowtie in India.


Now, why am I talking about my favourite mountain goat in a comparison test that involves the Ford Endeavour and the Hyundai Tucson? Well the reason, dear reader, is simple, and marketing pundits would call this move ‘benchmarking.’ Well, it looks like I have to explain a bit here.

Look, after spending Rs 14 lakh, none of us are going to emulate Paris-Dakar in one of these machines. They are mostly bought to satisfy the macho man hiding beneath the paunch and grey hair. Nothing wrong with that too. But when you spend so much money on a four-wheel drive machine, you expect it to occasionally go over the ledge and get its socks dirty, right? And more importantly, emerge from it without having to hire a JCB. Lastly, even if it feeds on diesel, you’d want it to be quicker than a bus from point A to B, right? So the hypothesis before this test was to find out the machine that is closest to the Chevrolet Forester when it comes to on- and off-road ability and overall performance.   The Endeavour is big. The Tucson is compact. Round one to the Endeavour since it offers more metal and hence adds a few more inches to the owner’s ego. If the big Ford looks like something built on a pick-up platform, it is not its fault, since it is built on a pick-up platform. And that means it has a proper ladder-type chassis that runs from bumper to bumper. Don’t blame Hyundai if the Tucson looks contemporary and a bit like a miniature Porsche Cayenne – because, in all probability, that was the idea. Parked next to each other, the Endeavour is Camilla on her wedding day, while the Tucson is all set to date Prince Harry. I don’t think even Ford will try doing a plastic surgery on the square-jawed behemoth – it is old and beyond a facelift. On the other hand, if the Tucson evolves any further, it will look like a fully melted candle. So these two cars are better left the way they are.

One of the reasons people buy cars is to travel in them. And the Hyundai Tucson is the vehicle of choice if you want to do that in comfort. The cardinal sin of using a pick-up chassis for an SUV means the Endeavour offers a rather unpleasant seating position, and more so, if you are big-built. While the middle row is just about passable, the last row demands samples from other species and certainly not humans. The Tucson does not have a third row, but you won’t complain since it seats four adults rather peacefully and comfortably. The driver’s seat and the overall environment is suited for long distance driving too. The ergonomics is not as good as, say the CR-V, but it’s much better than the Endeavour. The Endeavour’s interior would have got a perfect ten in a pick-up comparo seven years back. The game, Mr Blue Oval, has moved on. The Endeavour’s airconditioner works hard to keep the huge glass-house cool though.

Way back in 1969, the Americans sent people to the Moon in a rocket with less computing efficiency than today’s top-end home PC, says my nerd magazine. And I believe it, since the Endeavour engine, despite not being blessed with common-rail fuel feed, just about gets the job done. It is another matter that the engine could very well have been in duty since 1969. This near two-and-half tonne of automotive lump needs more than the weedy 121 horses that the 2500cc turbodiesel can summon. With 26.5 kgm available early in life, the Endeavour manages a 7.14 second run to 60 kph, which is not so disgraceful compared to the 5.6 seconds taken by the Tucson. Floor the 111 bhp, 1991cc CRDi four, and the Tucson will dismiss off 100 kph in 13.18 seconds flat while the Endeavour will be busy eating dust for another six seconds. Given a highway, the smaller car will never be overtaken by the Ford, with the Tucson touching 150 kph and the Endeavour falling short by 5 kph. They say the biggest enemy of a whale is its own weight. Ditto with the Endeavour. While on powertrains, we have to warn you that the best figure that we got with the Endeavour is 11 kpl, while the Tucson easily stretches a litre of diesel to 14 kpl (combined driving cycle).   The on-road dynamics of the Tucson is almost car-like, since it has underpinnings sourced from the Elantra. Which is not exactly very good news, since unless the 4WD lock is switched on, the Tucson is – and behaves like – a front-wheel driven diesel. That means a bit of wrestling with torque steer and minor steering corrections that are required to keep the car tracking properly. The car transforms to a true
corner hugger once the 4WD mode is engaged, but at the cost of drivetrain refinement. The end result is a capable car as long as you stick to tarmac or broken-road situations.

The Endeavour, on the other hand, avoids tarmac as if it is a soiled bedsheet. Its truck genes are suited to muck and it jumps around excitedly at the sight of proper off-road conditions. Driving the Endeavour in the 2WD mode (power going to the rear wheels, mind you) and sliding its dino tail around in slush is massively addictive and fun indeed. With a less lunatic 4WD pilot, the Endeavour can be coaxed to go places where the Tucson is better off not driven, thanks to the low-ratio that can be chosen the traditional way.

So which one comes close to the virtues of our benchmark? On-road, the Tucson is more like the Forester, but only when you are driving with the 4WD lock. Off-road, the Endeavour is actually better than our benchmark. If you live in town, our sincere advice to you is to buy the Hyundai Tucson – you will certainly enjoy the tall driving position, people friendly features, and yes, it is easier to park too. It will serve well as a neat transport to the nearby beach or hill-station, and give you that all-important outdoor-guy/girl image. But if you are the sort who has retired from a high paying IT job at the age of 35 to take up chicken farming – or at least you want to look that part – then the Endeavour is your transport.  You will have a blast driving it to the farm and chicken are never known to complain about ride comfort. Essentially, the two cars are
as different as the proverbial chalk and cheese. Just that we prefer chocolate (the Forester) in this case.