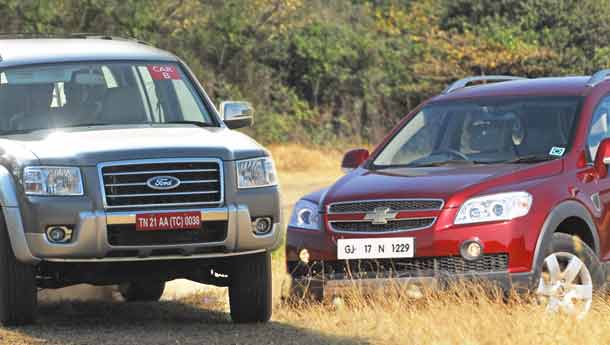 Both are diesels and both cost roughly the same kind of money – but which one should get your money? The Ford Endeavour is the traditional metal here – body-on-chassis construction, truck roots and a capable (141 bhp) diesel powertrain with 4x4 option. Brilliant indeed. It is a tough car that does surprisingly well inside the city as well as on the highway. In short, it is the real deal – cramped rear-most seats included. On the other hand, the Chevrolet Captiva is built like the Honda CR-V (read like a car) but offers the advantage of a diesel (148 bhp) powerplant. The engine is similar to that in the Chevrolet Optra Magnum but gets a variable geometry turbo that avoids lag and increases performance – and yes, 30 more bhp. The Captiva is now available with all-wheel drive and, more importantly, an automatic gearbox. It is much more refined a package than the big Ford and is easier to live with in civilian habitats. But if you want a tough vehicle for lots of adventures, it is the Endeavour that we would recommend. Unfortunately, people who spend Rs 15-odd lakh on cars don’t go off-roading with them, and that has affected our final verdict. Our choice? Chevrolet Captiva.