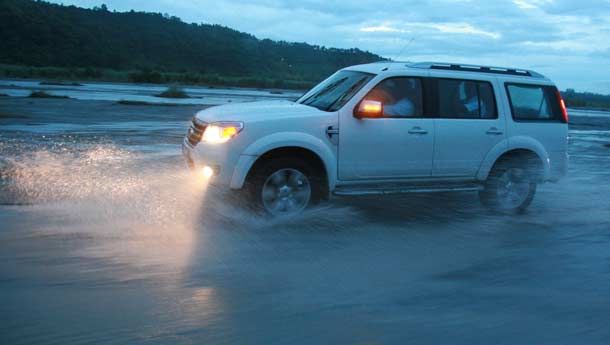 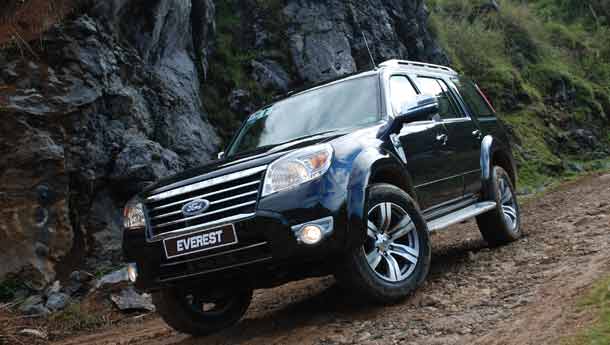 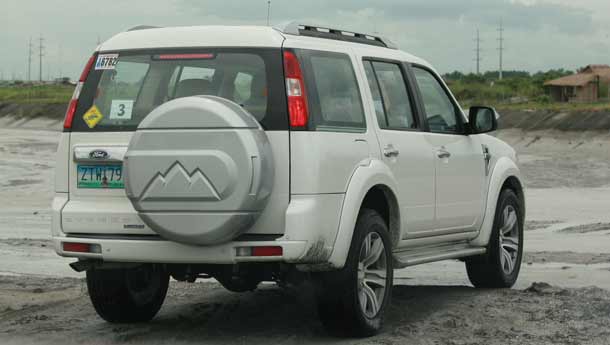 Keep it above 40 and you will be just fine. Get any lower and you will be digging yourself out for the rest of the day!” The sternness in his tone reminded me of Dennis Hopper from the Hollywood flick Speed at that point, but Beeboy Bargas wasn’t playing villain here. As our route instructor for the day, we didn’t have an option but to listen to him carefully. Driving on the river valley that once flowed under Mount Pinatubo in the Philippines, we had a soft river bed that threatened to sink us and the brand new Ford Everest to its axles. After all, Mt Pinatubo had erupted back in 1991, and the pyroclastic flow deposits made it one lairy place to drive.

You could call Ford crazy or rather brave to allow a couple of Indian auto journalists and a nervous instructor to put their new Everests through the ash-filled river bed off Manila, but then they were confident that their product would make it through without as much as a sneeze. This, the new Everest, will be our new Endeavour and yes, I know that you are dying to say it — where has all that macho-ness gone? No, it didn’t take a hike to Machu Picchu or any other peak, but the overall design elements are more in line with Ford’s Kinetic design philosophy. So gone are the butch-looking, rectangular grille and headlamps and in their place are new eyelash-like headlamps and a chrome-laden grille that give it a V-shape. To compensate for this newfound softness, Ford have added a pseudo bull-bar chunk of plastic to their bumper which sort of makes it the kind of car you can still take to your local Gold’s Gym. This new element did create problems with engine cooling, but with the design team and the engine team at Hiroshima going back and forth, it was finally sorted with no change to the design element.

Because this car is designed for ‘Asian sensibilities’, you also get a chrome strip atop the grille with its name emblazoned as a reminder. A new air-vent design on the side flanks takes inspiration from the ‘bullet in a bow wave’ school of thought. The rear tail-lamps have been slightly modified while the wheels you see here are of the 18-inch ‘diamond cut’ variety — we will get 16-inchers in India. New mirrors with turn lamps and a new bumper sum up the raft of exterior changes. Overall there is a higher use of chrome all around, but it still doesn’t give it the kind of raw appeal that made the previous two Endeavours such a hit!   As we hit the riverbed, we understood why Beeboy spent 15 minutes helping us unlearn how we drive. It doesn’t strike immediately, but once the said Everest puts its boots on the new terra firma, firm was something it definitely didn’t feel. A mere walk over it felt like walking over jelly — the surface creating ripples for metres and heart-stopping moments on our faces. Then as we rolled back into the Everests and got moving on the new surface, panic set in.

In seconds, the automatic gearbox started screaming in first gear, the wheels started to dig in and, just 20 metres since we’d gotten on, we were stuck — nice and deep.Wait a minute, did I just mention automatic? Yup, that’s right, the new Endeavour will be available with an automatic in India for the first time — that too on the big momma of them all — the 3.0-litre TDCI. This 2953cc diesel motor produces identical power and torque as the outgoing Thunder Plus 4x4 —156 bhp and 38.6 kgm respectively. But what’s different here is the presence of the aforesaid 5-speed automatic gearbox. Since the inline-four engine features a variable geometry turbocharger, Ford have tried to keep turbo lag to the minimum, but that doesn’t stop the automatic from playing spoilsport once in a while.

Right now though, we were staring at the front end of a red Jeep Wrangler and its winch in action. We were stuck so deep that the floorboard of the Everest was in line with the surface — that should give you an idea that even the Everest’s 210 mm ground clearance isn’t enough at times. For the Range Rover-engined Wrangler, pulling out the Everest seemed like kindergarten stuff and before we knew it, we were back on track, tackling a concrete embankment with 35-40 degree attack angles. Finally it was time for a driver change and I got behind the wheel, ready to feast on the Everest’s offroad ability.

What lay in front of me was possibly the widest flat stretch of surface I’d ever driven on. The river bed was causing resistance, but the experience was more fulfilling than many a supercar drive in the past. Even at speeds of 50-60 kph with nearly 8 to 10 kilometres of riverbed ahead of me, the steering tugging away a bit, the engine being overworked and the suspension making little to no adjustments, the smile on my face kept getting wider. Perhaps with such a challenging surface, the Everest’s true abilities came to the fore — one that has made it such a delightful and capable offroader over the years. It’s such an easy SUV to drive that getting lost in the wilderness is not entirely impossible, and yet it will get you out of there in one piece, no matter how much battering it goes through.   That’s the same for the Everest on-road too. Despite its large five metre plus length, the Everest doesn’t feel all that ponderous. Okay, it doesn’t handle like some of its softroader compatriots, but hey, they can’t boast of its depth of abilities either. The steering is nicely weighted, even if it lacks feel. There is a reasonable amount of body roll and the suspension can feel stiff at times.

But the new Endeavour tries to get over all that — except the gearbox. This five-speed unit probably traces back to some of the units we’ve seen on its larger American-bred brethren. It’s perfectly fine until you start to flog it. Somehow it just refuses to upshift quickly and more often than not, time is lost in unnecessary revs before the upshift actually occurs. Not that it would matter to the fat cats who will be chauffeured around and hog the rear seat, but for those who do, it can be a bit of a bother. And no, from what we understand, Ford won’t be offering a manual gearbox for the 3.0-litre 4x4. Not for the moment, at least.

For those who will hog that rear seat, there’s good news. Ford have tried to work on the underthigh support on its rear seats and have somewhat succeeded. Some changes to the interiors have been made, including some to the surfaces and textures, but largely it remains the same as the outgoing model. The test car here featured a Philippine touch screen audio unit with navigation facility, though we might get a slightly different spec here. Safety kit now also includes optional side airbags for the front occupants which is a move in the right direction.

As for the price, Ford don’t want to leave you with that ‘sinking’ feeling. A marginal increase is pretty much possible, but for that you get probably one of the few, really good offroaders in the country. One that even volcanologists will swear by!