Update 12:40: And here comes the moment for which we have been waiting for, the event starts in style, our very own Joginder Singh is here speaking about the car. He says that "we expect this product to be a game changer, not just for Ford India, but the Indian automotive industry."

Update 12: 44: Ford is happy to bring that "Best of Ford" to India. Quality, Green, Safe and Smart is how Singh explains the all new EcoSport.

Update 12:45: The revolutionary 1.0-litre EcoBoost is the first 1-litre engine to have been fitted in an SUV in India.

Update 12:46: EcoSport is the first in its segment to have Emergency assistance system. One more reason to love this much anticipated product.

Update 12:59: Manav Arya from Mumbai boys becomes the Urban discovery winners. It's his wedding annviersay, and what better gift he can get than EcoSport on the special day. SUPERB!

Update 1:06: Turbocharger is what makes the car so powerful despite being a small displacement 1-litre engine.

Update 1:09: EcoSport will challenge both the B+ hatchback and Compact SUV

Update 1:10: Ford EcoSport will be offered with 38 Accessories.

Update 1:11: And here comes the brand new Ford EcoSport. Ford finally puts an end to the wait and bring the super model to the stage. Pricing is yet to be announced.

Update 1:13: Ford EcoSport has been finally launced at an introductory price of Rs 5.59 lakh , isn't it really a gerat value for money product. SUPERB,we must say.

Update 1:19: Ford EcoSport is available in 10 Variants across 4 trims, 3 engine options and 7 colours. 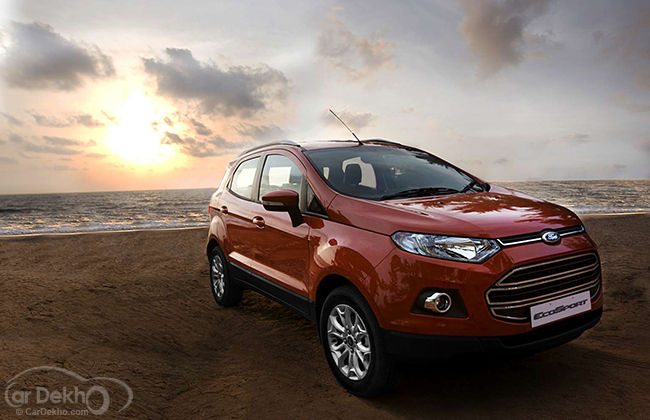 FYI, the EcoSport will be made available in as much as 10 different variants with three engine options- 1.0-litre EcoBoost Petrol, 1.5-litre petrol and a 1.5-litre diesel engine. There will also be an automatic variant. The smallest yet most powerful and promising 1.0-litre EcoBoost engine powered version is likely to be priced the highest among all. Despite being a 3-cylinder, 1.0-litre engine, the EcoBoost promises to churn out the maximum power output of around 120bhp, 170Nm torque, while returning a superb fuel efficiency of around 18kmpl. Amazing isn’t it? The other two engines- 1.5L petrol and 1.5L diesel are the same doing their duty to the Ford’s flagship sedan Fiesta as well.