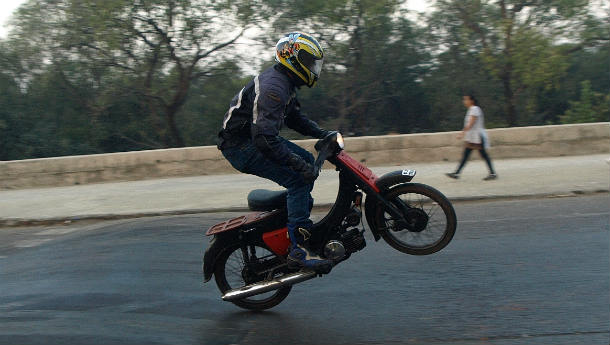 At 300 kph and rising, I usually turn another page of my book. I assume anyone looking at me at that point will think of me as a voracious reader, one who is cool as a cucumber and about as complacent, if such a thing can be said of a cucumber. What I'm actually doing is hoping, praying even, that the Boeing 737 does actually take off and not run straight into the wall at the end of the runway. I suffer from, as you can probably tell, a fear of flying. Or crashing, rather.

I think the combination of engines and wings is beautiful, but I don't know what's to stop either from, one day, just failing. I have no mechanical faith in aircraft, whatsoever. Even the most no-frills passenger plane has a million computers working overtime to ensure absolute safety, but because I have no faith in computers as well, it all comes down to nothing. Every single time the pilot announces turbulence, I enter a stage of silent panic and there is no way I can be distracted from that horrible feeling of having entered an air pocket. A sudden drop in altitude, a million times worse than the feeling of being on a roller coaster, and that desperate (but unfruitful) wait for the oxygen masks to drop from the overhead console any moment. It's the worst thing, psychologically, that a human can endure. It makes being captured as a prisoner of war seem delightful.

A good friend once co-related aircraft turbulence to encountering a series of potholes, or a damp patch of tarmac. So, in the same way that you only need to 'hang in there' as you pass a horrible stretch of broken tarmac, you need to be calm and focus on those cold bread items that pretend to be a juicy chicken sandwich, when above the clouds. Writing this is, of course, far easier. You must think that I must be terribly fond of landings, then, but no, I'm not.

To put myself at ease, I estimate the decreasing altitude beyond which 'death is not possible' and then, when I unfailingly remind myself of the various ways in which an aircraft can catch fire, I'm nervous all over again. Right down to those hopeless bumps as we touchdown, the 737 bouncing on its tyres, I have my heart on the tip of my lower lip. Thereafter, it's a strange sense of beauty. I like looking out the window, watching other planes take off as we cruise on the taxiway, while the cabin is flooded with Blackberry email alerts and various people being cross with their drivers circling the pick-up bay.

Strange, you must think, for a man whose favourite song of all time is 'Learning to fly' by Pink Floyd and for someone who yumps motorcycles with no provocation. I think defying gravity on a motorcycle is a beautiful achievement for mankind. The motorcycle is the engine, the man, the wings. Speed of any kind is as safe as it is unsafe, given the largely unpredictable nature of mechanical failure and cardiac-seizures. And yet, I entirely trust motorcycles with my life. Knee-downs? Wheelies? Yumps? I can't have enough of them.

It's not the proximity to the ground that makes motorcycles seem safer to me. Certainly, more people die in motorcycle accidents annually than they do in air crashes. But since my last motorcycle crash, about two years ago, I've only been riding much, much faster. I suppose it's to do with the fact that when a motorcycle engine fails, you stand by the side of the road, cursing. Unlike in a passenger jet, where you dive nose-first into someone's peaceful afternoon. I hope I haven't spoken too soon.