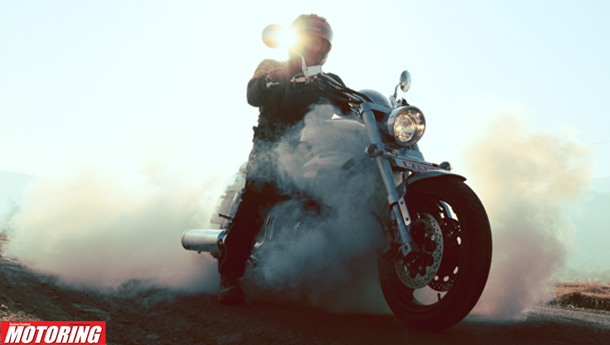 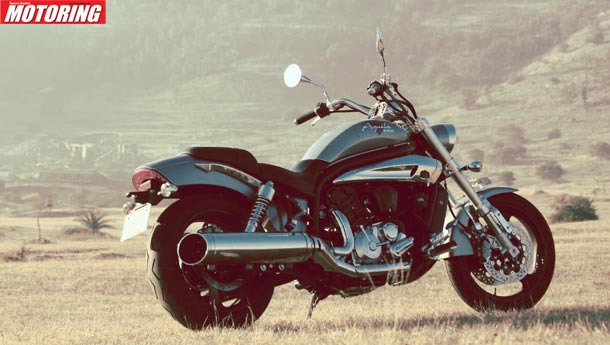 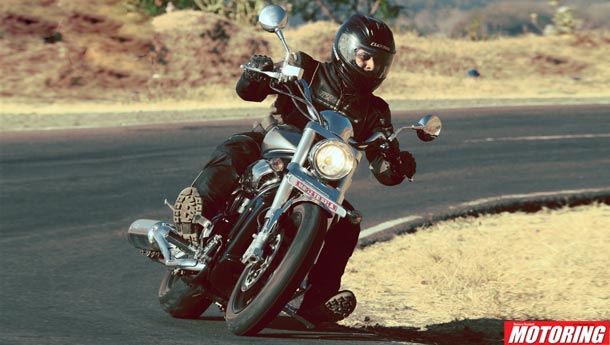 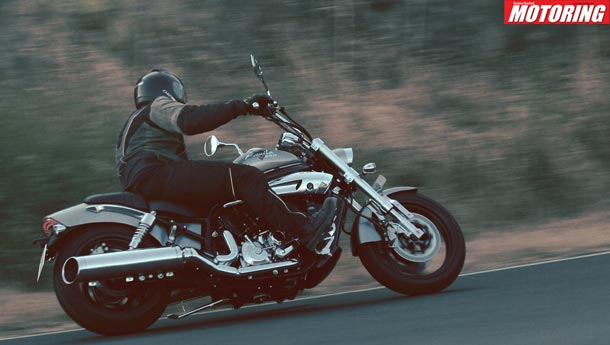 Scores highly in the looks department

You can’t go wrong with acres of chrome, fat rubber, generous dimensions and laid-back ergonomics. And it also helps if you’re not the first one designing such a thing. If the ST7’s styling cues tended more towards classic cruisers, the Aquila wants to be more of a sports cruiser. The lines sure do look right, the fit and finish has certainly been upped and even when you judge the motorcycle based purely by its looks, it seems well worth the money. We especially like that bazooka of an exhaust, the crisp rear-end styling and the detailing isn’t half bad either. But wait, because there’s a slight hitch there.

But in a non-cruiser-like manner. As you might’ve guessed, the 647cc liquid-cooled V-Twin is the same motor from their sport bike line-up and despite having a better horsepower figure at peak, it seems to be more at easy at lower revs than its other applications. The twin revs to a very un-cruiser-like 11,000 rpm, with the power curve peaking out at 9000 rpm with 74 horses. The motor’s character doesn’t quite gel well with the ergonomics and the feel of the motorcycle but once you learn to ride it differently, the motorcycle can be good fun. Despite all that, it doesn’t demand constant flogging and is quite rideable, even at crawling city speeds.

And it doesn’t ruin your spine or your butt

Sofa on wheels? Close but not quite. Onboard, the ergonomics could be a bit of a stretch for shorter people but the pegs are adjustable, so the discomfort could potentially be ironed out. The seat is definitely comfortable and the ‘bars don’t tend to tire you out, so, I’m guessing you can spend a whole day in the saddle without needing a doctor’s appointment the next day. Courtesy a soft suspension setup, the ride is quite acceptable over broken surfaces but it’s still not as good at being a La-Z-Boy as, say, an Intruder M800. Sadly, it’s not so rosy for the pillion.

Well, it’s a low-slung, stretched-out cruiser, so, the following words should be taken in the right context. For a motorcycle that weighs 240 kgs, it doesn’t feel as heavy in the corners as it should. It flows through corners sweetly with reasonable poise but the cornering clearance starts running out sooner rather than later as the pegs grind on the tarmac. And if you’re running a good pace over bumpier corners, the yawning rake makes the front shimmy a bit but there’s nothing alarming there.

Rs 4.99 lakhs, ex-showroom, Delhi. There. Hatchback money. If bang-for-the-buck is the first thing on your list, there’s no better deal for a cruiser out there. The 650 Aquila definitely comes loaded to its chromed gills, rides decently, has good pace on offer and has more presence on the road than the smallest of the Harley Sportsters that start at Rs 5.7 lakhs. If you’re the enthusiastic sorts and you’ve grown up on a steady diet of thumping Enfields, this isn’t the bike that you’ll be happy with because character is what’s missing. However, if it’s an easy going, chromed-out cruiser that you want to ride to the hill station on the weekend and to the office on occasion, you’ll be perfectly at home with the Aquila 650.

What you won’t appreciate

The hitch is that they’ve gone ahead and conveniently ‘borrowed’ a lot of the styling from a machine called the Yamaha Road Warrior. Go ahead, google it and see it for yourself. And while they were at it, they also ‘borrowed’ a few cues from a certain motorcycle called the Harley-Davidson V-Rod and thought no one would notice. They did; in fact, Harley-Davidson themselves noticed and actually send Hyosung a letter regarding the same. Besides that little hitch, the badge looks like a tacky food ration packet cover, the display, while displaying excellent readability, looks archaic and the plastic quality isn’t thoroughly consistent.

Yes, despite it’s sports cruiser intentions, a middleweight twin packed into a chrome-laden cruiser doesn’t quite feel right. Sure, you have a generous rev ceiling and a punchy top-end but one of the most important parts of the whole cruiser experience - the sound and the feel of that throbbing twin - is compromised. I don’t know what I missed more - riding the characteristic cruiser wave of torque or the throbbing soundtrack.

The seating at the back isn’t the most generous and the unfortunate one to be stuck at the back starts complaining sooner rather than later. The short seat pad could’ve been extended a bit further back without any massive interruptions to the styling. Also, though our test bike didn’t come with a pillion back rest, we’d recommend you put one on there if you intend to ferry your better half around for some time to come. Just ignore the fugly looks of it.

Not quite the complete cruiser experience

Despite its sports cruiser intentions, Hyosung’s latest entry into the market is a bit of a mixed bag when it comes to character. The middleweight sport bike motor nestled in there has the go but it doesn’t sound or feel right in this application. And it doesn’t go all the way into sport cruiser territory either, with the softly-sprung chassis, the stretched-out front and the limited cornering clearance. And then, there’s the lack of any sort of character, it’s playing it way too safe. It’s like the McDonalds breakfast menu, then, made so as to not offend anyone. Except Yamaha and Harley-Davidson, that is.