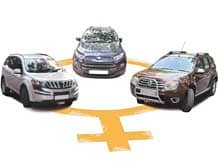 In the past one year, with Indians weaning off their love for small cars, car makers have jumped into the sports utility vehicles (SUV) segment. These big machines, which are home equally on tarred roads and dust tracks, are powerful, macho and exhibit aggressive roadside behaviour. The men take to them like bees to honey - the sales of Renault Duster and Mahindra XUV5OO testify to that. However, what if women want to sit in the driver's seat in these vehicles? What comforts and discomforts do they offer to women drivers? We decided to take a spin in the Duster, XUV500 and the recently launched Ford Ecosport to find out.

The first thing which struck me while stepping into the Ford EcoSport is the ease with which you can hop in and out of the car. The XUV5OO too has the same ground clearance of 200 mm, but while the doors open wide in the Mahindra vehicle, it is slightly difficult to get inside the vehicle, specially if you are wearing a sari or a skirt. The Duster has a higher ground clearance at 205 mm, but surprisingly is easier to exit and enter than the XUV. I found the doors of the EcoSport a tad heavy to manage. On the upside, I felt completely safe in it, given its stability and safety features in case of crashes.

Given the proportions of the XUV5OO I was worried about driving the vehicle in Delhi's chaotic traffic. But it wasn't really a task manoeuvring the car. The engine is powerful but the power comes with noise. Even when I put the audio on, I could hear the noise of its 2179 cc mHawk engine. In this regard, I though the 1.5 litre diesel engine in the EcoSport was peppy without being noisy. The 1.5 dCi engine in the Duster too is slightly noisy when idling.

As a woman, I found the push start/stop button in the EcoSport Titanium added to the driving pleasure. Renault and Mahindra do not have the feature available in their SUVs. At traffic lights, the EcoSport revved up quickly and I could pick up pace without any lag. While both the EcoSport and the Duster drive like a regular hatchback, the top-end variant of the Renault Duster (which delivers 108 bhp), however, took time to power up on busy streets.

The clutch and the gearbox on the EcoSport are light to the touch when compared with the Duster and the XUV5OO. This will certainly please drivers like me. The power steering is smooth and it helped me slide through the many police barriers on Delhi streets without much anxiety. Over speed-breakers and potholes, it was the Duster that seemed better - no, it did not spill the coffee in the holder. In the EcoSport, the suspension is slightly stiff, which makes the ride a little bumpy at times. The thicker tyres of the Duster help in cushioning shocks. The XUV too jerks over uneven surfaces at low speed. On the highway, at over 70-80 km per hour, the XUV powered well. But the overall drive quality of the EcoSport makes up for the occasional thumps.

As a driver, I would like to be in control of the road situation ahead of me, and the all-round visibility in the XUV is the best among the three vehicles. The projector headlamps on the front double up as cornering lights at tight turns. I found it particularly helpful while driving around the vehicle in the night.

Though all three SUVs had reverse-parking sensors, There was a glitch with the Renault Duster. When I tried to reverse the car, I had to lift the gear stick to move up front. It was tedious and the car rolled forward a bit. In contrast, the XUV5OO, which too has a six-speed manual transmission, was easier to reverse and I had no problems parking the car despite its size. In the EcoSport, the steering system and five-speed manual gearbox are smooth and there's a sense of familiarity for those used to driving hatchbacks. This added to my driving comfort.

Women like their cars to be clean and beautiful. The EcoSport's interiors are well-finished. The Duster has dual-coloured interiors, which while decent, do not have the sporty feel that the EcoSport offers. The dash in the EcoSport is expansive and is loaded with buttons, which I found difficult to read on the move. The XUV5OO has many individual elements that clutter the dash. It took me a while to figure out the various sets on information displayed on the console.

The Duster has been ruling the roads since it hit the roads in July last year. The XUV5OO too has made ripples for its performance both off- and on-road. But the comfort and the ease of driving the EcoSport, specially in city traffic, makes it a strong contender to win the heart of a woman driver.