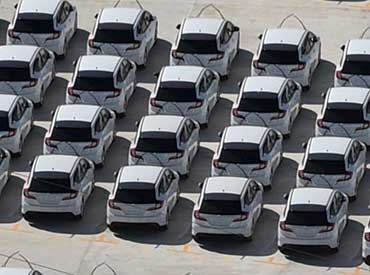 Anuj Singh, a 28-year-old executive working with a Bengaluru-based information technology firm, was looking to buy his first car early this year. After evaluating options in the entry-level small-car space (Alto, Eon and Brio), he decided to stretch his budget a bit to buy Maruti Suzuki’s Baleno.

Singh is not alone. Many first-time buyers, mostly in cities, are in a mood to think big and are opting for the more exciting and loaded vehicles, giving the entry numbers a miss.

In fact, leading car manufacturers — Maruti Suzuki and Hyundai — show the same trend in their segment-wise volumes. Maruti Suzuki, which was perceived as an entry-level carmaker till recently, is seeing pressure on this segment, while the other categories are growing.

Its mini segment (Alto 800, Alto and WagonR) was the only one which declined (by four per cent) in the first half of FY17, while total domestic sales grew 12 per cent. Consider the stats. Maruti Suzuki’s largest segment, which includes compact cars such as Swift, Dzire and Baleno, grew nearly five per cent. The mid-size segment (Ciaz) expanded 32 per cent and vans registered a 10.5 per cent growth. The utility vehicle segment grew by a sharp 150 per cent on the back of Brezza. The company’s domestic sales rose to record 705,287 units in the first half (H1) of the current financial year. But, the contribution of the mini segment was a contrast — dropping from 34 to 29 per cent (approximately).

R S Kalsi, executive director (marketing & sales) at Maruti Suzuki, which enjoys a 47 per cent share in the domestic passenger vehicle market, agreed that many first-time buyers were going straight to models above the entry level.

However, entry segment cars such as Alto and WagonR remain a top priority for the company. “There is no way we can think of ignoring this segment,” said Kalsi.

The company has tried to bring features like automatic transmission and airbags in these models. Some dent in its mini segment has also come from rival Kwid and a weak rural market. Kwid seems to be the only exception in this segment.

For the second biggest player, Hyundai, its mini segment (Eon) saw a volume decline of 21 per cent in H1. But, volumes of Grand i10, which is priced higher, surged 27 per cent. Its utility vehicle segment sales doubled in H1 due to Creta.

“The entry segment buyer is typically one who upgrades from two-wheeler. This category of buyers is under stress due to macroeconomic factors, especially in small towns and rural areas. On the other hand, in cities, a number of existing entry-level car owners are opting for upgrades. They have the support of resale value from the old car, which makes new purchase easier,” said Rakesh Srivastava, senior vice-president (sales & marketing) at Hyundai. Improving purchase power among salaried buyers and factors such as easy availability of loans facilitate upgrades.  Abdul Majeed, partner at Price Waterhouse, said the price differential between the entry-level and next-level vehicle is not very high these days. “Entry-level vehicles have not been refreshed for so many years. Buyers can get better products with a host of modern features by paying Rs 1.5-2 lakh more. Many buyers are willing to go for it”.