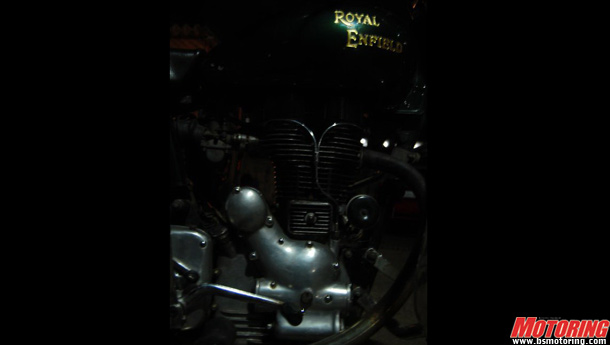 Do you remember how you came to love bikes as much as you do? I certainly do, and I still have the reason (or does she have me?) - my old Enfield Bullet. A long time ago, people were often treated to the sight of an eight year-old me standing on the kick starter and jumping up and down, trying to wake the sleeping giant. A few years down the line, I managed to learn how to start her and the triumphant look on my face let my poor father know that the time for the inevitable had come. Using all my superpowers of pestering, I wrangled a ride within the building compound (sometimes I even went, hold your breath, outside the gate to take a U-turn) almost every day, except of course, when exams were on. Those were the only days when my father could breathe easy.


Then, for the year or so that my father was transferred to another city (I was all of 13 years old), no one rode the Bullet or cleaned it. One fine day, I decided to rescue the bike from the miserable state she was in and dug out the keys from the back of a cupboard. Almost as soon as I'd managed to wheel out the flat-tyred bike from the garage, I saw my mother standing right behind me, yelling at me to put the bike right back. All thanks to a nosy, good-for-nothing watchman. Sigh. Apparently, I was too small to manage motorcycles yet. I still turn into a raging beast when faced with pesky watchmen.


But it wasn't long after the incident that dad returned and when he heard what I'd done, he got the old bike up and running and let me have her. And that, as they say, was it. That first ride on Marine Drive is one of the milestone moments of my life. Life was never the same again. She stayed with me, roaring around at time-bending speeds - it's not what you think. She had the smallest carb father dearest could find (smart fellow, he was) and needed of Marine Drive to hit 60 kph. Since speed was out of the question, I turned my attention to doing the only thing I could - cornering and jumping over speed breakers. What to do, I thought of her less as an Enfield and more as an XR 750! Also, she was, for all practical purposes, a stop-gap measure until I got my hands on a Brough Superior, a Vincent or a Triumph.

Wheelies and stoppies were discovered only after I got my Pulsar 180, but boy did the Bullet corner. And once you got it going, it felt unstoppable, though it wasn't in a feel-good, invincible, grow-chest-hair-in-an-instant manner. If anything, whatever hair there was, fell off due to the Bullet's heart-stopping braking performance. Would I trade those times for anything else? Hell, no. Did I get frustrated and kick her every time she broke down for no apparent reason? Oh, yes. But the girls in college thought I was just about the coolest thing around. End of story.

Today, it's been over a year since dad's gone on to a better place and the Bullet stands there, missing her original rider. She's not seen much action either. A plan to ride to the Rann of Kutch fizzled out due to work. The furthest I rode her was to Joshua's house, for a café racer conversion. She didn't exactly end up looking as I envisioned, and turned out to be a weird café racer/flat tracker hybrid. She still looks good, though - the logic is, café racers look good and flat trackers look good, so a combination must look good too. It just depends on where you look at her from and a firm belief in the adage 'beauty is in the eyes of the beholder'.

A recent trip to the National Motorcycle Museum in the UK sparked up and short-circuited a brilliant light bulb in my head, and I have yet another way in which to carry out the 'final job' on the poor Bullet. How about this - famous styling cues from the golden era of British motorcycling, all incorporated onto the Bullet. Imagine the headlamp hood of the Ariel Square Four, the tank shape of a BSA Goldstar, fenders from a Vincent, Smiths meters, classic alloy-spoked wheels, 'bars and rear-sets and so on, on a single motorcycle. (The Royal Enfield 350 engine, in my opinion, looks as good as any of those more exotic Brits.) If my 'combination looks' theory is right, she'll turn out to be quite the looker, and it might just be the last thing I do to... I still haven't got a name for her. Hmm. Maybe I should start with that first, eh?