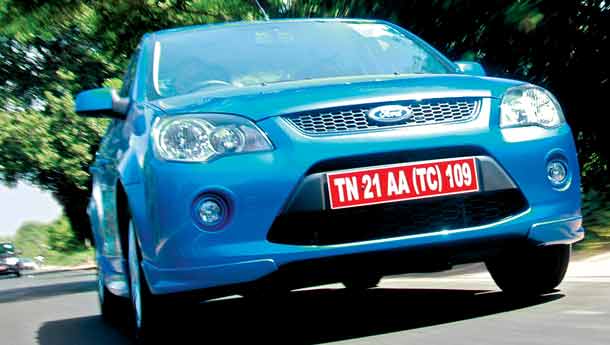 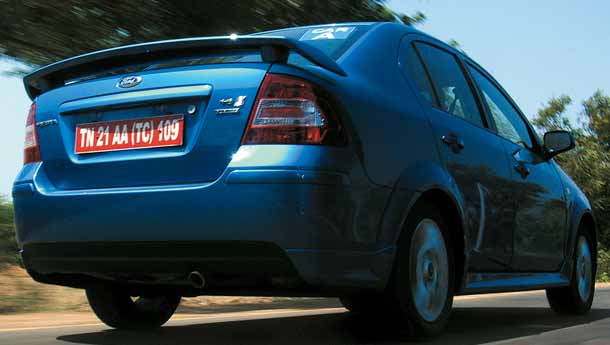 They’re a good bunch, the Aussies. I spent some time in Australia studying for a Masters degree and found the Australians, almost without exception, to be fun-loving, informal, cheerful and ever-ready for a party. Their sense of enthusiasm was infectious, and I was beginning to get a strong whiff of it at the launch function of the Fiesta variants. Michael Boneham, Ford India’s new managing director and president, was bonhomie personified, circulating amongst us hacks and looking pleased as punch. Similarly, John Lonsdale, veep, product development and Sam (you can’t get any more informal than ‘Sam’, can you?) Barmby, B-Car programme manager for Ford Asia Pacific and Africa, were in a jovial mood, reeling off jokes and contributing to the overall lightness of mood. As a group of auto company executives, they were certainly the most easy-going bunch I’ve come across thus far and their outlook on life appears to have contributed significantly to the car in question here, the Ford Fiesta 1.6S.

‘We’re really, really proud of this car’, exclaimed Boneham as the covers were whipped off the vehicle, and at first glance it was not difficult to see why. The Fiesta 1.6S, in Aquarius blue (a colour unique to this model), looked pretty smashing. The external changes to the Fiesta were most apparent on this car – there’s not much that can beat skirts, nifty 15-inch five-spoke alloys (but with overexposed wheel nuts, and only four nuts, slightly marring the five-spoke design – tut, tut) a spoiler and a chrome-tipped exhaust when it comes to getting someone’s attention. The S looked taut and lithe, and definitely sexier than it’s ever been. The new team was apparently very keen to highlight Ford’s sporting heritage, and the S certainly looked the part. All that was lacking was racing stripes, which would have totally transformed the car. Come on, Ford, you’ve already done it with a special edition Fiesta – the Durasport – so why not this one? Still, I suppose it isn’t too difficult to slap on some stripes yourself. Apart from the obvious body kit, other changes have been incorporated onto the exterior as well, most of which are common to the ‘standard’ Fiesta 1.6 and the 1.4 TDCi, which were also unveiled – and yes, in case you’re wondering, the Fiesta 1.4 petrol has been done away with.

The headlamps have been further swept back, something which is not immediately apparent, and there are slightly changed fog lamps too. The new honeycomb-pattern upper and lower front grilles, with larger openings, aren’t that evident either, and quite frankly the front end looks only marginally different from the older car. This isn’t a bad thing, since the Fiesta was always a handsome machine, but one gets the feeling that Ford has missed an opportunity to comprehensively re-style the car. Move down towards the flanks and it’s still the same Fiesta that we know and admire, albeit with the turn indicators having been shifted onto the ORVMs. Strangely, this has only been done on the non-S versions; the S still has standard indicators. An oversized SXI badge takes the place of the indicators on the standard version, something which could have been a little more discreet. The rear remains much the same, except for clear lens tail-lamps and a nice, red ‘S’ badge on the 1.6S.   The cabin’s been given some treatment, too. The S continues the sporty theme, with black and blue being the colour preferences. Metallic highlights abound, and the instruments have been redesigned, with a racier font for the numbers. There’s a honeycomb graphic added on as well, which is about the only hitch in the overall scheme. The seats are more contoured, although not quite body-hugging, and a sporty white stitching scheme’s been employed throughout. The pedals on the S are the de rigueur aluminium jobbies, which nicely round things out. The SXI gets beige leather seats and a mahogany centre console, but oddly no alloy wheels. The Fiesta’s audio system (on the S and SXI) finally gets mp3 compatibility, plus there’s an auxiliary-in port to plug in external devices. The famous ‘Ganesh’ shelf stays, along with plenty of nooks and crannies and multifarious cup-holders – you’re definitely not going to be short of places to plonk your beverage of choice. In other words, the cabin’s been freshened up without being radically different; again, not a bad thing. There’s no change in legroom or headroom (both fairly generous, but not class-leading) and overall fit and finish is of a high order – but again, not as high as the benchmark, the Honda City. On the S and SXI models, you get twin front airbags and ABS with EBD as standard; there, that’s the safety box ticked.

Before you ask, no, there aren’t any changes in the engines. The punchy, MPFI 1.6 litre petrol engine does duty in all the 1.6 variants, including the S. Is it just me, or was another opportunity lost here? Granted, the 100 bhp Fiesta 1.6 has always been a bit of a blast, but surely if you’re trying to project a sporty image, an extra 15-20 bhp would have been appropriate? The punter who’s going to buy one of these things isn’t particularly looking at fuel efficiency, even in these times of bowel-loosening fuel prices, so a completely unchanged engine specification is a bit of a let-down, if you ask me. Ford could’ve really socked it to the competition; the fact that they haven’t suggests that the old ‘sportiness-but-with-good-mileage’ compromise is going to be around a while longer, and not just at Ford.

There is, however, one area that Ford claims they’ve worked on extensively, and that’s the suspension setup on the 1.6S. Those who’ve driven a Fiesta 1.6 (and indeed the entire Fiesta range) know that it’s one of the best-handling, fun-to-drive sedans in the market, and Ford say they’ve taken this a step further on the S, by putting in stiffer springs and tuning the suspension. The dampers also have a new ‘jounce’ bumper design, with valve tuning. Jounce refers to the way in which a vehicle responds to energy stored in the springs; a system of this type should therefore add additional compression damping and control the amount of rebound in a vehicle, leading to better overall handling and stability. Well, does it? The honest answer is that it’s difficult to tell. I drove a 320 km loop from Chennai to Pondicherry, along the superb East Coast Road, and was frankly none the wiser because there are hardly any corners on that road. Sure, the Fiesta was just as much fun to drive as it’s always been – that engine makes a great snarl when flogged, and when you hear it you want to keep it flogged.

The gearbox is unchanged– in feel, action and precision it’s second only to the Honda City – the steering is sharp and feedback-laden and the brakes, although slightly lacking in pedal-feel, have enough bite to keep things from going south. On the few sweepers that I encountered, I threw the car into them with as much violence as I could muster; it went through without any real complaint, other than a touch of body roll and some tyre squeal. However, I remember the older, non-tweaked Fiesta behaving almost exactly like this, hence the ‘difficult to tell’ admission. What Ford really should have done was to have let us loose on a track with both the standard and S variants of the 1.6, so that a back-to-back comparison could have been done. To be fair to them, they took this criticism on board and promised just such an event. Of course, we’ll go out and find a few sharp corners of our own and bring you a comprehensive road test as soon as the car is officially launched, but until then, suffice it to say that Ford have another excellent product on their hands. It doesn’t seem to be that different, mind, but that shouldn’t be a deterrent for most buyers, especially for the 1.6S. Now, how about those racing stripes and another 20-odd bhp, then?