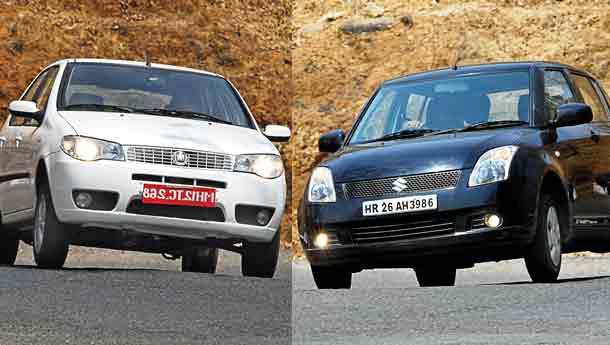 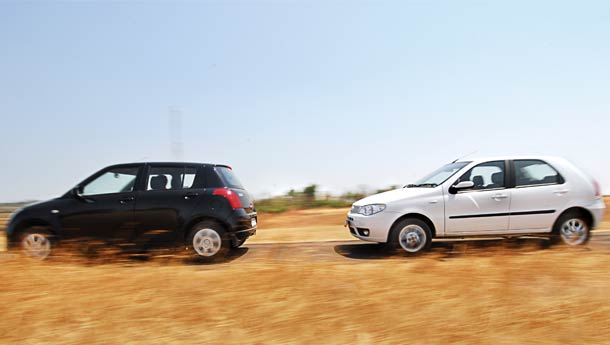 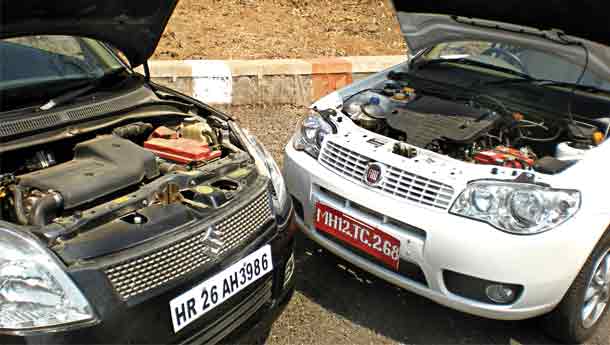 Before I get down to brass-tacks, there’s an interesting little back-story to this comparison test that is worth mentioning. A few years ago (2000, to be exact), General Motors decided to buy a stake in Fiat. This event was announced with much fanfare and raised expectations all round. At that time, Fiat was in pretty poor financial shape, and the much-needed injection of funds was looked at as being a part of the answer to their woes. As for GM, their market share in the USA (their biggest market) was steadily declining. In Europe, the Opel brand was being given a working over by Ford and Volkswagen, to name but two. Measures urgently needed to be taken, and they had to look to the future; small cars were not really their forte, whereas Fiat could produce them almost blindfolded. Moreover, making small cars was the way to get into emerging markets like India, and so for GM the deal seemed equally sweet. As part of the agreement, Fiat and GM agreed to set up a $285 million plant in Bielsko-Biala, in southern Poland, to build small-capacity diesel engines – again, something which GM had no real experience in.

The cheer didn’t last very long. GM realised they had made a hasty, near-desperate move and that suddenly they had to handle Fiat’s problems in addition to their own. The end result was that GM pulled out of the deal and Fiat received a whopping $2 billion from GM for doing… well, not a whole lot. However, GM still retained a 50 per cent stake in the Polish small-diesel plant, and they gave the rights to use the 1248cc, 74 bhp common-rail diesel engine that was being produced there to Suzuki, who had also put money into the joint venture.

Cut to 2007, when Maruti launched the Swift diesel with this very engine. It’s been a big seller since then, and has had no real competition (no, not even the Getz diesel). Fiat India had too many problems to think about new launches, and so it is only now that they’ve put their own famous engine into the Palio, giving the Swift a considerable head start. Does the Palio have enough in it to frighten the Swift? Let’s now get down to brass-tacks.   Design
The original Palio was by far the best looking hatchback in the country; indeed, it still holds its own among newer company. Even now, when I look at an old 1.6 GTX or an NV Sport, I think back fondly to the time when Palios were almost like a second home to me. My first several travel trips were in Palios, and I’ve had a thing for them ever since. The re-styled Palio Stile is still a very good looking car, but not to the same extent as its predecessor. The new, square-ish tail lamps are fresh and contemporary, livening up the rear considerably, but the added tear drops to the headlights don’t quite work (by a very small margin). The bit that really makes me clench my teeth is the grille, though. It looks like the vent from an old Fedders-Lloyd air conditioner, and I half expected to find a lever to move it up and down. I can’t understand why it was put on, given that there’s a perfectly nice, uncluttered grille on the petrol version of the Stile; differentiation taken too far, in my opinion. Otherwise, it’s a car that stands up well to visual inspection, sitting low and purposefully on its 13-inch tyres.

The Swift is, along with the Palio, one of the two most distinctive looking hatchbacks around. Whether it’s good looking or not is still a matter for debate; some hate the way it looks, others think it’s great. It’s a much more rounded design, as opposed to the rectangular motif of the Palio (it’s true, right down to the shape of the ORVMs and the AC vents). Lined up alongside the Palio, the Swift looks a bit bulbous, primarily because of those flared wheel arches, and is a fair bit taller as well; it wears 14-inch tyres, which add to its height. For some reason, the top-end models of both cars don’t come with alloy wheels, not even as options, which is a pity. The alloys on our Palio were specially fitted for the shoot, and they look really nifty. Still, as a design the Swift is more complete and cohesive than the Palio, end to end, so it just about noses ahead in the looks department.
SWIFT: ****
PALIO: ***

Interior and comfort
Getting into the Palio is a case of déjà vu all over again, to use a cliché. If you’ve been in the older one, you’ll feel right at home – which isn’t necessarily a good thing. Nothing appears to have changed, apart from the tone of the velour seats. The same meters stare back at you, you reach for the same AC controls and you grasp the same steering wheel. The overall finish levels are somewhat poor, and the plastics don’t look like they’re up to the mark. An exterior revamp should ideally have been paired with newer interiors too – right, Fiat? And for heaven’s sake, when will someone realise that those ORVMs are next to useless? They offer a very restricted field of vision and need changing desperately. On the plus side, the Palio’s seats are fantastic, offering just the right amount of thigh and lumbar support; there’s nary an ache or pain to be felt even after a 300-plus kilometre drive. There’s also a dead-pedal, something the Swift sorely lacks. Rear legroom isn’t the best, but again the seats make up for it. The boot is capacious too, making this car a genuine long-distance candidate.

The Swift, being a newer design, predictably trumps the Palio in the interiors department. The quality of materials is superior, especially the plastics, the finish levels are excellent and the cabin is a much fresher, funkier place to sit in. You’re seated higher off the ground than the Palio, giving both a better driving position and a superior view of the road ahead. The seats themselves could use improvement, however; they’re not as good as the Fiat’s, and you definitely feel the kilometres after a while at the wheel. The boot is almost minuscule compared to the Palio, so if you’ve got more than one large bag, the back seat is going to come into play. Nevertheless, due to its higher quality levels, it takes this round as well.
SWIFT: ****
PALIO: ***

Powertrain and performance
Now we’re talking. Both cars feature the same engine, and their specifications are almost identical – 1248cc inline-fours, both breathing through 16 valves, both DOHC, with common-rail technology. Maruti calls its engine DDiS, Fiat goes with MultiJet – po-ta-to, po-tah-to. The Swift produces 75 bhp and 19.3 kgm of torque, while the Palio boasts of 74 bhp and 18.6 kgm of turning force; a marginal difference, but what does that translate to in real life? Several things, as it turns out. For one, the Palio is the noisier car here. Both at start up and in motion, the engine sounds louder and slightly cruder than the Swift, something that you can put down to inferior sound insulation. In the acceleration stakes,  the Palio gets from 0-60 kph in 6.2 seconds, from 0-100 kph in 15.9 seconds and will go on to a top speed of a shade over 140 kph. Its long-throw gearbox (compared to the Swift, that is) aids the process well, with firm shifts through the gears. Once above 120 kph, however, it begins to feel a little nervous and quivers about somewhat, especially in crosswinds. High speed lane changes have to be effected with due care, as does braking from high speeds; hit the brakes on a sweeper at 120 kph and the Palio shimmies and dives like you’ve suddenly said ‘Boo!’ to it.   The Swift is a totally different animal; it’s amazing how the same engine can behave so differently in two different cars. It feels smoother, more refined and altogether more sophisticated; indeed, it feels like there’s a different engine under the hood. The 0-60 kph run is almost identical to the Palio’s, at 6 seconds, but it’s more than a second quicker to the 100 kph mark, covering the run in 14.3 seconds, and it’s a faster car (with a 148 kph top speed) despite being slightly heavier than the Palio. Granted, our test Palio’s engine was brand-spanking new and hence still not fully bedded in, but by the same token the Swift went like a rocket right from its launch date (I was there on the launch drive, so I can claim some knowledge in this regard). The short throw gearbox is easy to use, with crisp shifts, and its only drawback is a reluctance to downshift quickly. As for braking, the Swift has the Palio’s number again – it stops better and straighter, in a nutshell. The numbers really don’t tell the full tale, though. The Swift’s short first gear and torque advantage allows for quick launches, and the subsequent tall gears make the difference in acceleration figures and top speed, but in every respect it’s a better, more fun car to drive than the Palio.
SWIFT: *****
PALIO: ****

Ride and handling
The Palio gets its own back in this department, no doubt about it. The quality of ride on offer is more mature than the Swift, over all kinds of roads. Go through bad roads at some speed in the Palio and you’ll notice more sound than vibrations, whereas the Swift will definitely tell you what’s passing under your posterior. On the flip side, the Palio offers very little steering feedback and strongly favours understeer. The car tends to lumber a bit in corners, and produces some amount of body roll as well. The Swift, to make up for its harsher ride, is the car in which to go corner carving. It’s much more flickable, the steering wheel comparatively lets you know what’s about to happen and there’s virtually no roll. Since the two offer different, but equally important plus points, I have no choice but to declare this round a tie.
SWIFT: ****
PALIO: ****

Verdict
By rights, the Swift is the clear and deserving winner of this shootout.
It’s better built, has an engine that’s better tuned and suited to the purpose, a better engine-gearbox combination, is more fun to drive, has a proven after-sales network and will hold its value better. Crucially, you can also order yours with ABS, a real life saver in our traffic conditions; there’s no such option as yet with the Palio. A no-brainer, really – or is it? For Rs 41,000 less than the ABS-version Swift VDi (Rs 5.35 lakh, ex-Mumbai), you can buy a fully loaded Palio SDX (Rs 4.94 lakh, ex-Mumbai). For that money you get a good looking, reliable hatchback,with great ride quality, impressive boot space and a frugal (if slightly noisy) engine. With a growing service network and improving service standards, the Palio makes for quite a compelling buy – but, even though it tries very hard, it doesn’t get the cigar as yet.