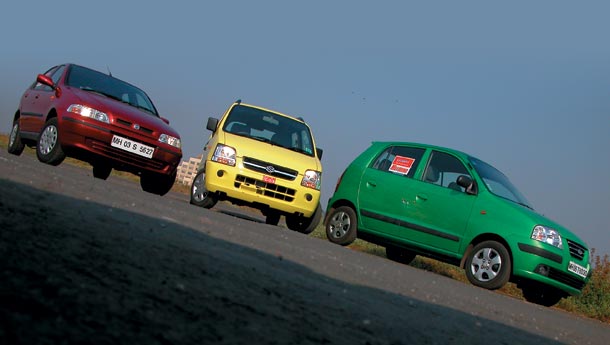 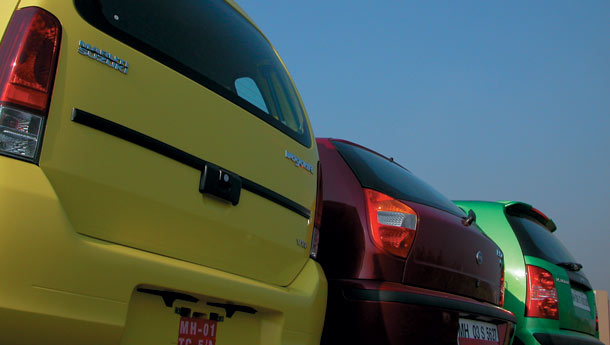 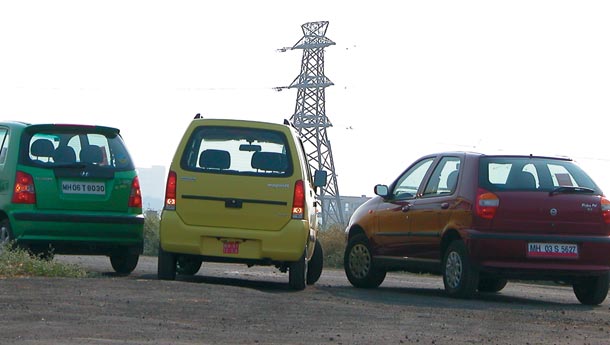 ‘Disgusting! How could you bring back the wrong car of all things?!’ That was Srinivas Krishnan, after being informed that we had come back with the ‘wrong’ car. Now how could three people – Param, Pablo and I – go to collect a test car, and actually come back with the wrong one? Well, the car in question was the ‘new’ Wagon R, which boasts a new front grille, clear-lens headlamps and new tail-lamps. And at the Maruti facility, all three of us failed to notice that we had been given an older, pre-facelift car by mistake.

The ‘mistake’ was fixed after a few frantic phone calls, but the fact this little incident served to illustrate was that the new Wagon R isn’t really all that different to look at from the old one. Which is something you definitely cannot say about the Xing, as Hyundai have given it a rather more comprehensive cosmetic makeover. That the new car looks decidedly better than the old Santro is the sentiment shared by most. The third car in this trio, the Palio NV, isn’t going through a mid-life makeover yet, hence looks the same as ever. However, Fiat have made it more fuel efficient than before. That’s been done at the price of engine performance, which we’ll get to later. The NV is a sub-segment bigger than either the Wagon R or the Xing, but is priced at par with these cars, and is hence a prime candidate for those looking at moving up from M800s.

Actually, choice still is pretty limited in the small car segment. What does an entire nation, that’s ready to upgrade from the ageless M800, buy? The Zen is quite old now, is rather cramped for space, and doesn’t ride very well. The Alto, though slightly more contemporary, is equally cramped and its styling leaves something to be desired.   Which leaves us with the three we have here – the new Wagon R, the Santro Xing and the Palio NV. Adequate (but no more) power,aircon, power steering, power windows, central locking and seating for four – adequate ‘mobility solutions’ for the upwardly, er... mobile masses. I know, the ‘mobility solutions’ bit sounds rather depressing, but there’s perhaps no better way to describe these cars.

To look at, I’d say the Xing and the NV are just about equally matched. The Xing has shades of Hyundai’s own Getz (due to be launched in India soon), and isn’t bad looking at all. We had an XS version on test, and with its nifty little rear spoiler, attractive face and tasty interiors, it looked like a happy prospect. Just one thing though – only the XS variant, which is the highest trim level available, gets new interiors. Lesser Xings have to make do with the older Santro-spec cabin. The old Santro, with its toothy grille and bug-eye headlamps, always looked a tad grumpy. The Xing looks like a Santro that’s been on one of those ‘Art of Living’ courses, and is finally at peace with itself. The new clear-lens headlamps look good, and the re-styled rear is distinctive, if nothing else. On the XS, there are redesigned armrests for the front passengers, a redesigned instrument cluster and some plastic-chrome bits that try very hard to convey that ‘premium’ feel. There’s still lots of grey plastic everywhere, but that goes for each of the cars on this test.

Where the Xing does score is in the engine department. Its 1086 CC inline-four makes 62 bhp, enough to take the little car all the way up to 145 kph. The five-speed gearbox is notch-free and more precise than, say, an Accent’s. With independent McPherson struts up front and coil springs behind set up rather firm, the ride is not extremely comfortable, and over rough surfaces, occupants do get bounced around quite a bit. But the rather firm-ish set-up pays off when you push the car through your favourite set of twisties – the Xing didn’t roll and wallow as much as I had expected it would. Ergonomics are none too bad either, and the car comfortably seats four, though don’t think of carrying a fifth passenger in the back unless he or she is prepared to get extremely intimate with the other two. Luggage space is standard small-hatchback issue – take either a large suitcase plus a soft bag or two, or you can fit two medium-size suitcases if you stack them vertically.

On to the new Wagon R. Though it’s often been derided for its tall, boxy styling, I don’t think the Wagon R looks too bad. Like teenagers in Tokyo, who dye their hair purple and pink, wear silver-blue shades at one in the morning, sport metallic-gold sneakers and ride the Suzuki Choi Nori, the Wagon R is cool in a weird kind of way. The ‘new’ one (in VXi trim) gets chunkier 155/65 rubber, a chrome moustache on the front grille, and the now-mandatory clear-lens headlamps. In yellow, our test car looked bright and cheerful, though I’d rather take a black Wagon R, then add big alloys and meaty rubber, a loud sports exhaust, and a full complement of skirts and spoilers. Then again, maybe I’ve been reading too many issues of Max Power.   Speaking of power, the Wagon R’s 1061 CC four-pot mill makes 62 bhp (Hyundai matched the Wagon R’s power output when they launched the 1100 CC version of the Santro), and also has a similar 145 kph top whack. However, the R is more than half a second slower than the Xing, in the 0 to 60 kph sprint and more than a second slower in the 0 to 100. While driving, the R doesn’t feel all that slower, but then, numbers don’t lie. The gearbox is not as slick and precise as the Zen’s, though the five ratios are pretty much well matched to the engine. The suspension set-up is similar to the Santro’s (McPherson struts at front, coil springs at back), but the Wagon rolls a bit more than the Korean car. The steering too, doesn’t provide as much feedback and the car isn’t too happy being chucked around bends. Oh, it’ll do that alright if you insist, but its mission in life is to ferry the wife and kids to and from the supermarket, no questions asked. And of course, it’ll also carry all their shopping without complaint, so you shouldn’t have any qualms about handing over your Mastercard...

And finally, the Palio NV. The first thing is, the Palio 1.2 is now finally closer to the Xing and the Wagon R in fuel consumption numbers – about 11 kpl for the NV, as against 12 kpl for the other two (in city driving conditions with air-con liberally used). Which is good if you consider the old Palio 1.2’s figure (about 9-10 kpl), but bad if you expect any performance at all from your car. Don’t know how and what Fiat have done to the car’s catalytic converter or fuel-injection mapping or air-conditioning system to improve fuel efficiency, but whatever they’ve done has had a detrimental effect on outright performance. The 1242 CC inline-four now feels like it’s gasping for breath all the time. It’s supposed to be making 72 bhp, but you feel you only have access to 60-odd horses. The NV’s top speed is about the same as the other two cars, but it feels the most sluggish while accelerating away from rest. Hey, this is supposed to be an Italian car – how could you strangle the engine like this? I understand Fiat would have only done this in deference to the Indian consumers’ penchant for frugality, but could there’ve been a better way?

Apart from the more frugal engine, the Palio NV continues as before. More or less. There’s more sporting-looking instrumentation, and the more expensive NV Sport gets 14-inch alloys and 175/65 rubber. The Palio certainly feels bigger, more solid and more substantial than either the Wagon R or the Santro Xing, rides much better than either of those cars and offers more elbow room for front seat passengers. Interiors don’t really feel special – the dash is one huge block of plastic, but the car is comfy enough for four, and the aircon is quite effective. Some people on our team had problems with the Palio’s front seats and the positioning of its pedals, but I couldn’t find any fault with the ergonomics. In fact, when Srini and I did a 1200 km round trip (to Raigad, Pratapgad and Mahabaleshwar etc) in a Palio 1.9D a couple of months ago, we never felt any discomfort. The car’s a bit cramped for space at the back, but no more than the other two. And I must mention here, we never had any reliability issues with the NV either.

So who wins this three-way battle? Hmm... the Wagon R certainly doesn’t. Its lines are rather dated, and the interiors are dull compared to the Xing’s. The Xing looks fresher and the XS version’s spruced-up interiors are rather nice. Yet, as the most sensible overall choice, I’d say the Palio has an edge over the other two. Undeniably, it feels the bigger, plusher car to drive, and ride quality is vastly better than either the Wagon R or the Xing. The NV’s still not as fuel efficient as its Japanese or Korean opposition, but at Rs 4.12 lakh (ex-showroom Mumbai), the 1.2 ELX NV is priced at par with the top-of-the-line Xing XS and is only Rs 20,000 more expensive than the range-topping Wagon R VXi. And if you are prepared to sacrifice all or some of the frills, you can take home the 1.2 EL NV for only 3.50 lakh, or the EL PS NV for 3.80 lakh. With the Palio NV, you’d be living with a marginal deficit in fuel efficiency and an engine with more performance potential than it currently puts to use, but in the end, you’ll also have more car for your money. Bravo!