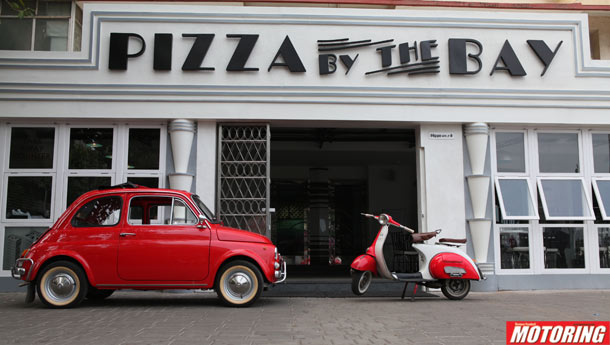 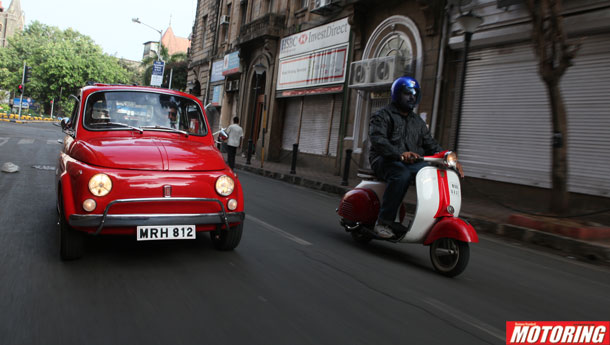 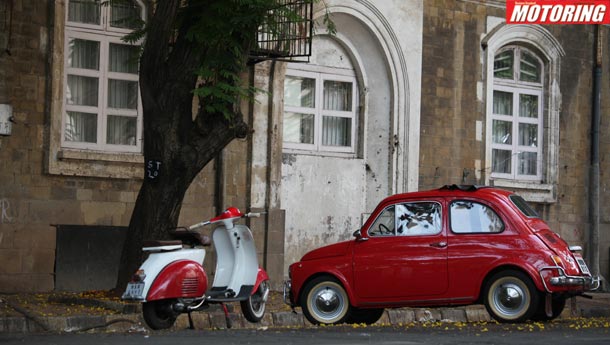 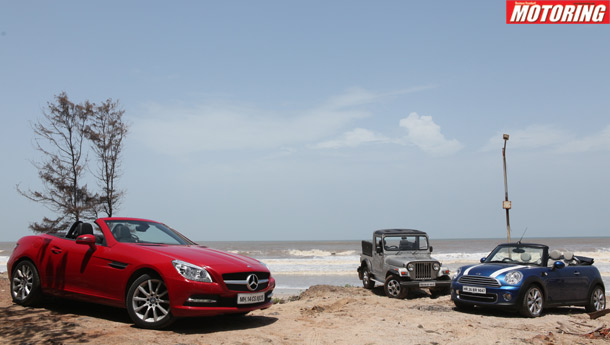 When you see these two Italians together, little do you realise that a whopping 350 kilometres separate Fiat’s Mirafiori plant from Piaggio’s Pontedera facility. Even though they have different parenthoods and completely different attributes, they seem as if they are related to one other. On a lovely Sunday morning, with the rainclouds threatening to dampen our enthusiasm, a mellow light falls on the organic shapes of both these machines and to my eyes, they look as if they were born of the same mother. Call me romantic, call me sentimental, whatever, but you cannot fail to be moved by the sight of these two great Italian classics seen millimetres away from each other. That too, in matching and fetching colours!

The Vespa is from 1970, while the Nuova 500 rolled out a year later. What’s interesting is that the Agnelli family – who owned Fiat – bought a controlling stake Piaggio in 1959 and held it for about 40 years. So you could technically say that these two are siblings but any resemblance is coincidental!


There are of course sound reasons for both machines to share some connections. The 500 was engineered by Dante Giacosa, who has to his credit some of the greatest Fiats ever, including the first Cinquecento (aka Topolino) which was the world’s smallest car in 1937. And he repeated history with the Nuova 500, which is so unbelievably small in the flesh – well, it was actually smaller than the Mini! Now Giacosa was an aeronautical engineer who stumbled into the automotive field.

And incredibly, so was Corradino D’Ascanio, who was hired by Enrico Piaggio to refine his first two-wheeler prototype, the ungainly looking MP5. D’Ascanio’s MP6 prototype housed the mechanicals and cycle parts in an elegant load-bearing body, while the front suspension resembled that of an aircraft landing gear! Of course, there is the little fact that Pontedera used to assemble aircraft before starting to produce little scooters!

The aero origins apart, you must take in the era in which both these vehicles were conceptualised. The Vespa was born during the final days of WWII and this was a time of material, fuel and money shortage in Italy. The Vespa’s efficient and cost-saving design plus of course its other attributes like manoeuvrability, ease and comfort of use and engine efficiency made it popular with the masses. Then by the early 1950s, with Hollywood endorsing it, there was no looking back for Piaggio’s runabout, which went global. Now, the origin of the Cinquecento is similar, but there is a twist to it. In 1957, when it was introduced, Italy was still recovering from the war so average income was low while raw materials were also hard to come by. So like the Vespa, the new 500 was also efficient in design to keep costs low and whatever was superfluous was eliminated. And here comes the twist.

Like the Nano, the 500 was designed to substitute scooters as the means of personal transport! Fiat already had the popular 600 but the 500 was envisaged initially as a two-seater with weather protection and of course more safety and stability. Unlike the Vespa which had a steady growth in acceptance, the 500 was not welcomed warmly by Italians. It was only when Fiat made it a four-seater and gave it more creature comforts and features that the 500 really took off. And how! Two-wheeler sales in Italy actually dropped when people realised that the 500 was the perfect upgrade from their scooters. In 1957, when the 500 was launched, 330,000 two-wheelers were sold in Italy. By 1965, this had dropped to 200,000 units. Yes, these two Italians were rivals! In a sense, they are rivals here too, to win our attention. Class for the mass? You can’t get better examples than these!

I am sitting in the 500 and despite its incredibly tiny dimensions, I don’t feel claustrophobic at all – the reason could be the fabric ‘sunroof.’ Still, it’s a marvel of packaging. And beyond is Kyle, blatting about on the Vespa, undoubtedly thinking what a marvel of packaging the Vespa is. Both these cleverly designed vehicles – they could be permanent exhibits at any museum of design, and probably are – move about the streets of Mumbai like they would have done back home in Italy. We deliberately got the two here for the shoot, so that it looks like Europe, and also to experience the nimbleness of both in narrow city roads, which is where they belong. The 500 squeezes into the tiniest of lanes and seems to be able to go where the Vespa can. No power steering required, it is so easy to manoeuvre even in crawling speeds – why can’t modern cars be like this?

The 500 I am driving is almost the last of the line – the Lusso version which existed between 1968 and 1972. Yes, after over a decade of its launch, a more prosperous Italy was demanding some more from even this economobile. Hence this Lusso luxury version, which was distinguished by a new steering, a new instrument console, different carpet trim, tubular bumper extensions, chrome bits, new hubcabs, new lighting, new steering wheel, radial tyres and well, even a new Fiat logo on its nose. The advertising at that time made a big deal of the new material that was used in it – plastic! Of course, the front-hinged doors were already incorporated by 1965 in the 500 F edition. The Vespa that Kyle’s on had twin seats, the front of which was sprung to keep the rider's tooth fillings from rattling off over the Italian cobbled roads. Weather protection consisted of the large floorboard and within the left curvaceous panel resided a tiny storage space. The rear bumperette cum registration plate holder was a period accessory.

Giacosa’s attempt to convince the Fiat management to go for a rear-engined car with the 600 paid off, and this time around, with the 500, he managed to make it air-cooled as well. The two-cylinder 499cc motor placed at the rear chugged out 21.5 bhp – it may not have been much, but for a car that weighs 530 kg (10 kilos more than the 500 F because it was the luxurious one!), it is not stressed. A four-speed manual gearbox sends the power immediately to the rear wheels. Driving it around, I am taken in by the simplicity of the whole thing – it is so effortless to drive and so intuitive, almost like I am one with the car. Of course, I could have done with more power and more braking abilities, but we’re talking about a car that’s over 40 years old but still looks so refreshingly young.

The Vespa’s smooth engine cover hides a 150cc air-cooled single-cylinder two-stroke motor that develops 5.4 bhp. Like with the 500, it may not be much, but one big advantage of the monocoque is its lightness. Shifting gears using the left arm is something we Indians are so familiar with and Kyle tells me how rough-and-ready the scooter already is. It sounds just right too, like a proper, chatty Italian! Kyle is sitting upright on it, as if he’s in the armed forces, but the grin on his face gives him away. He likes the way the Vespa’s tiny wheelbase makes it as lithe as its namesake – the wasp. The engine is gutsy in the first two gears that have relatively short ratios, while the third and final cog is more long-legged. Panic braking can indeed cause panic if you’re unfamiliar with the machine, until you get used to the way the stoppers do their business.

At the end of our session, both Kyle and I are just left staring and taking in their simple but elegant lines and nodding our heads in silent thought: these are not mere machines but acts of genius. Bellissima! A big thank you to Siddharth Khona and Dean D’Souza for helping us with the beautiful 500 and gorgeous Vespa.