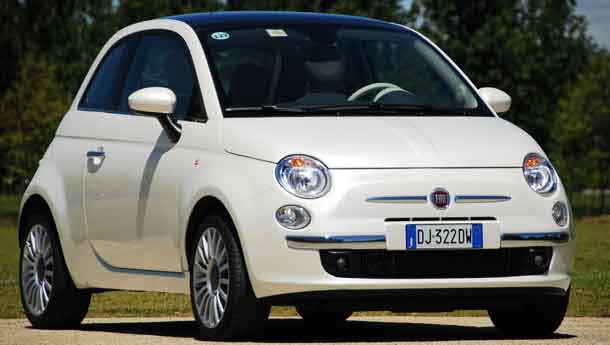 So, you put in lots of green mint toothpaste, which goes to the brakes, which in turn powers the car? Sheer genius!’ ‘How much power should it have? 22,000 horsepower? Perfect.’ ‘Talcum powder mixed into the paint? That way the car will smell nice and fresh? Wow, you’re quite something!’ ‘You’re saying we should make it run on water? Brilliant! It’ll be a smash hit.’ These were some of the inputs that the new (Nuova) Fiat 500’s designers gave to Sergio Marchionne, the Fiat group’s CEO and the man who, along with the dashing Luca de Montezemolo, transformed Fiat from a badly hobbling giant into a muscular 100 meter sprinter. With out-of-the-box innovations like these, is it any wonder?

Except, of course, that these rather left of field gems came not from hotshot engineers and designers at Italdesign-Giugiaro or Centro Stile, but from a bunch of extremely enthusiastic little children, who had been roped in by Fiat as participants in a panel discussion of sorts. The idea behind this was simple: the new Fiat 500 was all about innocence and about re-birth, in many ways. Who better to involve in this process than children? The resulting interaction, filmed for posterity and screened for the world media at the press conference following the launch, was as entertaining as it was enlightening.

On the one hand, I thought about how the car would have turned out had their suggestions been taken seriously – a pleasant-smelling two-door hatchback that defied the laws of physics and dental hygiene. On the other hand, it was refreshing to see how Fiat had made the design and launch of the 500 into a personal, inclusive process. Their website, fiat500.com, launched in May of last year, invited everyone to contribute ideas about not just the car’s design, but just about anything they wanted – the advertising campaign, for instance (the final campaign, brilliantly done, was largely written by Marchionne himself). Hundreds of thousands of people sent in countless suggestions and sketches, turning the website into an online lab of sorts. It’s certain that Centro Stile, where the car was designed, took some of these ideas on board. Just think about it – when was the last time you were invited, by one of the world’s major auto groups, to involve yourself in the design of a car on which they were pinning their every hope?

At this point, allow me to rewind a bit and tell you about the 500’s launch. Actually, ‘launch’ is probably too weak a word for the extravaganza that Fiat unleashed on the world on the night of 4th July. I’ve been to a few vehicle launches over the years, but this was on another plane altogether. Turin, Fiat’s hometown, had virtually been taken over for the big event, to be held on the river Po – yes, you read that right, the evening’s festivities were to be held on the river, not on its banks. There was such a buzz in the air that I was inspired to wear a jacket and tie, something that even a loaded gun would not normally provoke. As journalists, we had prime seats for the evening, and we felt like minor movie stars, with the crowds behind the barricades yelling and waving at us. The lead up promised a very special event, and so it turned out to be.

Over the next two hours, we were treated to a visual and aural spectacle that few who witnessed it are likely to forget. There was nostalgia, in the form of the original 500 making several appearances on the water-set (specially motorised floating rigs had been made for them), there was singing and dancing (one performer, who everyone originally thought was Oprah Winfrey, turned out to be a filled-out Lauryn Hill) and there were thundering fireworks displays that set off every car alarm within half a mile. The last such fusillade heralded the entry of the new 500, and such was the roar that greeted this that even hardened auto hacks stood up and did the Mexican wave. Needless to say, I was all agog at the opportunity to drive the little car the following day.

I may as well say it straight off and get it out of the way; this baby Fiat is a triumph in every sense – of marketing, of design and of actual, seat-of-the-pants driveability. As soon as you lay eyes on it, it’s instantly recognisable as an old friend in new clothes. The round headlamps, suggesting a hint of mischief, immediately catch your attention and make you smile. The chrome ‘moustache’ on the nose, the raised strip down the centre of the bonnet, the irresistibly cheeky nature of the whole package – oh yes, the DNA of the original 500 is very much in evidence, and I daresay Dante Giacosa, the genius who designed the original car, would have approved. The story continues inside, from the chrome, hook-shaped door handles reminiscent of the original, to the decidedly retro instrument dials, all housed in a single unit and available in a classy ivory or sporty black. The entire instrument panel is body coloured, a nice little flourish. The seats continue the homage to the first car, with a solid colour tone at the bottom and a colour matching the steering wheel on the head restraint. Speaking of colour, you can customise your new 500 in as many as 500,000 different combinations, including body, interior and seat colour, stickers, wheel rims, bonnet trims, nudge bars and wing mirror cases. Space-wise, the cabin is a text book example of ergonomic design – there’s more than ample head and leg room for both front and rear passengers, although with a 185-litre boot, you’re not going to be fitting too much luggage in there.

Under the cute little bonnet, you’ll find one of three engines – a 1242cc, 69 bhp petrol, a 1368cc, 100 bhp twin-cam six-speed version of the same engine and the 1248cc, 75 bhp turbodiesel MultiJet (yes, the one in our own diesel Swift). In the overwhelming rush for test cars, I managed to snag a drive in the 100 bhp petrol and the diesel versions, and they were both absolute hoots to drive, in different ways. The diesel, with a healthy 14.8 kgm of torque on offer as low as 1500 rpm, is going to be the biggest seller, chiefly due to the engine’s superb tractability, refinement (yes, small diesels can be refined) and fuel efficiency. It handled bumper to bumper Italian traffic, express highway blasts and tightly looping hill roads with aplomb; it was especially impressive in the twisties, with the torque carrying it up slopes and around corners with consummate ease. It did suffer from a slightly front-heavy feel and a similarly minor lack of steering feedback, but the whole package, including the pliant ride quality, more than compensates. The 100 bhp petrol is a very different animal, especially in black and red trim, and certainly the one to buy if it’s fun you’re after (and just you wait for the 150 bhp Abarth version being readied!). The ride is noticeably stiffer, the steering much sharper and the engine note that much more of a snarl, and even though you have to flog it to about 6000 rpm to let all the horses out, once it sets off you’re guaranteed to be smiling. Given an Italian mountain road, this little monster will show you as good a time as many bigger, more powerful cars – it’s sharp around corners, with the slightest hint of understeer, but it will quite happily wag its tail should you provoke it with mid-corner throttle inputs. It would have been interesting had Fiat opted to send power to the rear wheels in this car. The much-loved original was a rear engine/rear wheel drive combo, and although the new car is front/front, I bet that a whole bunch of enthusiasts would have lined up at showrooms if they had rear wheel drive on offer. In both versions, the gearbox brings up the rear admirably. For someone used to the Palio’s somewhat soggy shifter, the slightly heavy yet precise shift action on both models came as a pleasant improvement.

It doesn’t end there, mind you. The 500 comes ready to meet Euro 5 emission norms, has a five star Euro NCAP crash rating, seven airbags as standard equipment, a 500,000 km warranty as an option, at-home pick up and drop-off when service is due (and they’ll pay your taxi fare to the tune of 50 euro in the meantime), full Bluetooth, Windows Media and iPod compatibility and a range of incredibly easy finance options – how about a 50 per cent down payment, with the other half due two years later, free of interest? No wonder the first lot of cars is already sold out (and at a base price of 10,000 euro, it’s not the cheapest car around).

There’s no doubt about it, then. Fiat has done a truly superb job with the newest iteration of this most iconic of badges, and from the near-hysterical reactions of the public, it’s clear that Italy has fallen well and truly in love with the 500 – all over again. It’s another matter that we’ll never see it in India – think a starting price of Rs 5,60,000 for the automotive equivalent of a cute puppy – and that the next Fiat lined up for us is the Linea. Still, that shouldn’t stop anyone from appreciating the new 500 – a fitting update of a much-loved classic.