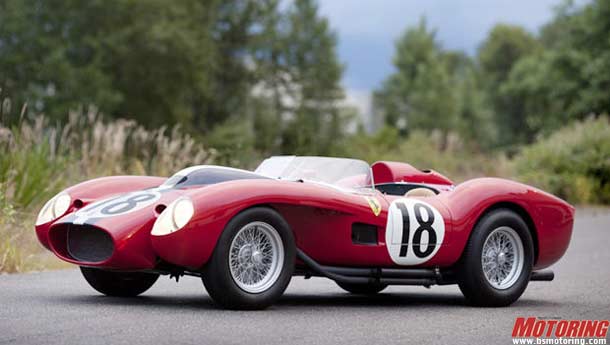 A curvy red 1957 Ferrari became the most expensive car sold at auction, fetching $16.4 million at Gooding & Co on Saturady and topping a weekend of sales in which autos outshone equities.

The Ferrari 250 Testa Rossa prototype, which competed in the Le Mans 24-hour race, was on the block with hundreds of other collectible autos during auctions coinciding with Monterey Car Week in California, an annual gathering of collectors and other enthusiasts.

“The stock market being volatile almost helped us,” said Max Girardo, managing director of RM Auctions in Europe. “It makes classic cars even more desirable” because they are seen as safe tangible assets.

RM Auctions set a record for a Mercedes-Benz with the $9.7 million sale of a silver 1937 540 K Spezial Roadster. It was consigned by Sam Mann, a collector from Englewood, New Jersey. The same model fetched $8.25 million four years ago, according to Girardo.

‘MORE SATISFACTION’ “In an era when cash returns practically less than the rate of inflation, investing in tangible assets like automobiles brings you better returns,” said Dave Kinney, contributor to Automobile magazine. “And they give you more satisfaction.”

The top lot at Bonhams, a 1957 BMW 507 Roadster with its engine rebuilt by Motion Products Inc., sold for $1 million, reaching its presale high estimate.

One of the star lots, a 1925 Rolls-Royce New Phantom, custom-designed for the Bengal tiger hunting expeditions of India’s Maharajah of Kotah, failed to sell. It was expected to bring $750,000 to $1 million.