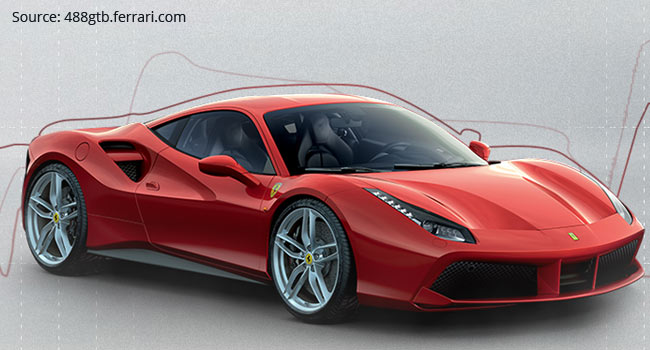 Powering the new 488 GTB is a newly developed 3.9-litre twin-turbo V8 petrol engine that is capable of producing 670PS of top power at 8,000rpm along with 760Nm of torque at 3,000rpm. This engine is coupled to a 7-speed dual-clutch automatic transmission gearbox. The GTB stands for Gran Turismo Berlinetta, a reference to its deep roots in Ferrari history.

Though the vehicle looks like an upgraded version of the previous generation 458, it gets cosmetic upgrades to keep things fresh. The 488 GTB also comes with a newly designed head lamps and slightly modified front fascia. While the front is characterised by the dual grille opening which channels air into the two radiators, there is also a double front spoiler which, on close inspection, looks very like those of the F1 single-seaters.

Further, the two pylons at the centre, which are combined with a deflector, channels air towards the flat under body.  The bonnet has pronounced, raised central section and two side channels, which makes the car look more sporty.