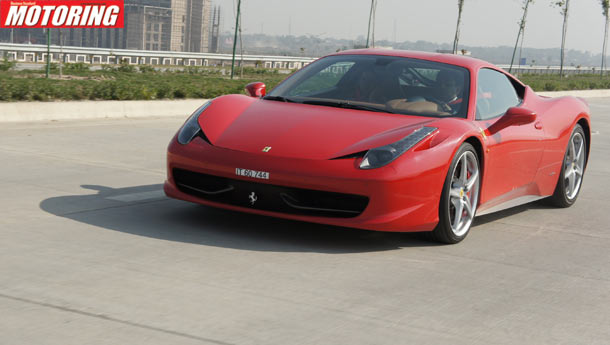 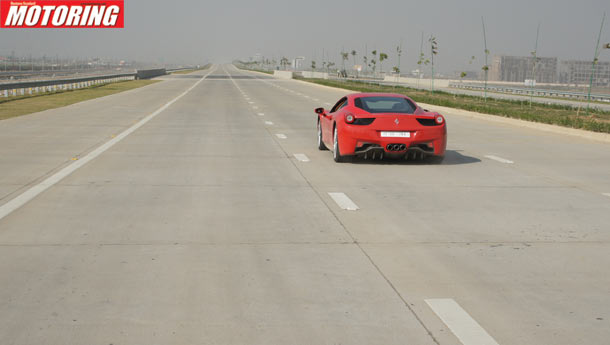 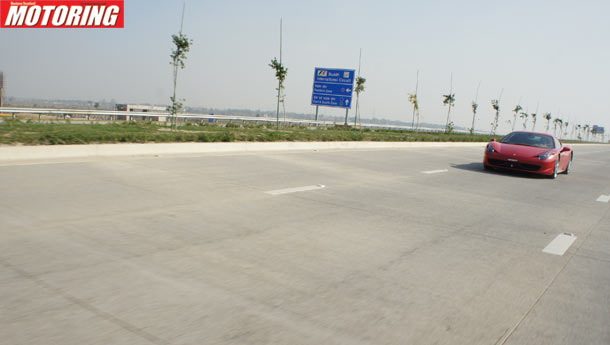 Within minutes of the carrier truck having rolled up the quiet street in Greater Noida where my apartment is, a crowd started gathering. Cars were slowing down, their occupants craning their necks to gawk and stare. Motorcyclists were stopping to gather around the truck, getting off their bikes to poke and prod. One biker got so excited, he forgot to brake and actually crashed into a Honda City parked ahead of the truck. And then, right on cue, a police patrol car rolled up, lights flashing and siren blaring intermittently.

At this point, you’d probably expect the cops to try and reign in the pandemonium. But, no, the cops actually proceeded to park their Mahindra MUV right in centre of the street, trooped out of the vehicle and gathered around the truck, which was now in the process of offloading its very precious cargo. One of the cops, face beaming with a smile that stretched from one ear to the other, spit out a thick wad of pan juice and loudly pronounced, ‘Arre, yeh to racing cars hai!’

Cut to a few weeks ago, when I got an email from BSM, asking if I’d like to do a story for their 13th Anniversay issue. ‘Lazy fucks that we are, we are giving you a golden opportunity to do some of our work,’ the editor said, promising ‘worldwide fame’ in return. It was an offer I couldn’t refuse, of course. Especially because the senior road test editor slyly slipped in a mention of the possibility of getting a Ferrari – a 458 Italia, no less – for my story. These BSM guys sure know how to push all the right buttons, eh?

One thing led to another until, finally, the aforementioned carrier truck – bearing the Ferrari 458 Italia – rolled up to my apartment in Greater Noida. The plan was to drive the car at the brand-new six-lane Yamuna Expressway, which connects Delhi to Agra. This Expressway hasn’t been opened up to the public yet and is only expected to be inaugurated early next year. However, it is almost completely ready and the BSM team and I agreed that this Expressway’s unrestricted, wide open (and for now, completely deserted…) expanses were just about the best place to run the 570 horsepower Ferrari.

As the 458 was driven off the truck, Anubhav, the very affable and ever-courteous communications head from Shreyans (Ferrari’s first and hitherto only dealership in India) smiled and asked if I’d like to take the wheel. Now, over a career in automotive journalism spanning over 15 years, I’ve probably driven more than my fair share of exotic, fast cars. AMG Mercs, BMW M cars, the Audi R8 V10 and an RS or two, Porsche 911s in various flavours and various kinds of race and rally specials. And yet, I’d only driven one Ferrari up until that day – a 308 GTSi – which I drove during my two-year stint with BSM, almost 10 years ago. So being offered the keys to the mightily glorious 458 was, for me, a moment wrought with intense emotion.

Before getting into the car, I spent a few minutes just looking at the 458, taking in its stunning beauty, the perfection of its lines. Designed by Pininfarina, the 458 is breathtakingly beautiful and, for me, right up there with my other two Ferrari favourites – the 288 GTO and the 355. I’d even say the 458 is the best looking car Ferrari have made since the 355 and is definitely the pick of the current lot of Ferraris.

Getting into the low-slung 458 was a bit of a struggle for me (and getting out was a nightmare!). But once inside, the car’s Ferrari-ness was simply overwhelming. Soft, high-quality tan leather everywhere, chunky steering wheel with the Ferrari emblem embossed in the centre and gearshift paddles mounted behind the steering wheel, all added to the inescapable sense of occasion. Without further ado, I proceeded to insert the key into the ignition and pushed the steering wheel-mounted ‘Start’ button, waking up the car’s lusty 4.5-litre V8. At idle, the Ferrari’s V8 rumbles fairly quietly, barely hinting at the fury it can unleash if you prod the accelerator pedal. Indeed, Ferrari claims it can propel the 458 from zero to 100 kph in less than 3.5 seconds, zero to 200 kph in 10.4 seconds, and on to a top speed of more than 325 kph.

But first, before I could even begin to think of experiencing the V8’s might, I needed to get a bit more familiar with the 458. Initially, I was a bit worried about the fact that it was a left hand-drive model, but keeping the car’s dual-clutch, seven-speed transmission in automatic mode meant it was about as easy to drive as an everyday Civic or Corolla. Yes, that was my very first impression of the Ferrari – at low speeds and in traffic, it was astonishingly easy to drive. And at anything below 100 kph, very quiet too.

With Anubhav sitting beside me in the 458, we trundled along at an easy 100-120 kph on the road leading up to the Yamuna Expressway. At one point, from where the road began to empty out and traffic began to disperse almost completely, I prodded the Ferrari’s throttle about half way down its total length of travel and the 458 immediately came alive, snapping to attention and charging forward with such unabated animal savagery, it took my breath away. Anubhav, in the passenger seat, merely smiled.

In the meanwhile, we got to the Expressway’s access point, where a beaming security guard let us through without asking a single question. The six-lane, 165 km long Expressway, which has been built at a cost of about Rs 11,000 crore, will be officially inaugurated early next year and will reduce travelling time from Delhi to Agra to about two hours or less. But on that day, it was our very own private playground. Endless kilometres of smooth, perfectly laid out tarmac. And a 570 bhp Ferrari to drive on it. It would have been rude not to do 300 kph, right?

I did get to fully unleash the Ferrari V8’s might that day, blasting up and down the Expressway at triple digit speeds, which are best not mentioned in a family-oriented magazine. And for a Ferrari fanatic like me, it was a few hours spent in heaven. Riding on 20-inch wheels shod with 235/35 (front) and 295/35 (rear) tyres, and in ‘Sport’ mode at all times, the Ferrari was an absolute rocket down the straights. And around the few gentle, sweeping bends we encountered, the car cornered hard and flat, like the precision instrument it is. The soundtrack was an orgasmic symphony of howling, screaming Italian V8, accompanied by an angrily wailing exhaust that was only all too eager to participate in the fun. Jeremy Clarkson would have termed the noise ‘biblical.’ And indeed, if Megadeth, Motley Crue, Led Zeppelin, Deep Purple, Metallica and Iron Maiden all got together, they still wouldn’t be able to outdo the 458 Italia in the vocal department.

Right, now here’s an honest admission – if I had the ability to write in ten different languages, I still wouldn’t have been able to adequately describe the 458. The car is magical – magical beyond its 570bhp V8, carbon-ceramic brakes, dual-clutch seven-speed gearbox, sophisticated ABS and traction control systems and what have you. The 458 Italia is more – much, much more – than the sum of its exquisite parts.

While watching the car being loaded back on to the carrier truck, I felt a sense of loss. Despair and sadness, even. Deep down, I realised that this was not just the first time I’d driven a Ferrari 458 Italia – in all probability, it would also be the last. I loved this car so very, very much, but it costs more than Rs 2.5 crore and the chances of me ever being able to buy one are zilch, zero. I wished they didn’t have to take the 458 away, I wanted it to stay forever. And I stood there and watched it being loaded on to the truck, then watched the truck as it was driven away into the distance. Then, slowly, I started walking back towards my house.