Feel the wind on your face

If you are the type that wants to pull on a helmet and burn rubber, then this should be a good year for you. What’s more, you may not need to rob a bank to own a dream motorcycle. The Auto Expo, slated for February 2014 at Greater Noida, will undoubtedly unveil a few mean machines, with the legendary Triumph also to look forward to — the motorcycle will become available for the roads this month. Meanwhile, here are a few that you can dream about. Honda CBR300R
The new CBR300R was recently revealed at the 12th China International Motorcycle Trade Exhibition in October 2013. It will replace the existing CBR250R. The styling cues have been taken from the company’s own Fireblade motorcycles. The CBR250R’s design, which was itself borrowed from the Honda VFR, never really looked exciting enough to own it. Now, the CBR300R's sharp front with attractive twin headlights will introduce a measure of sportiness in the bike. The new two-wheeler is powered by 286cc, four-stroke, single-cylinder engine that is liquid-cooled and uses fuel-injection technology and pumps out 30.6 bhp at 8500rpm. It is available in two variants — standard and with ABS. 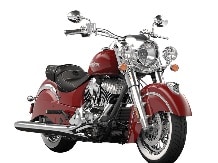 Indian Motorcycles Chief
The legendary Chief from the US company, Indian Motorcycles, will come in three variants: Classic, Vintage and Chieftain. All three motorcycles will be powered by 1.8-litre Thunder Stroke 111 engines. As the manufacturers have refused to divulge power specifciations, we can only confirm the torque figures; it will be 161Nm at 3000rpm. Some of the features that are standard on this bike are ABS, cast-aluminum frame with integrated air-box, cruise control, keyless start, light bar and premium leather seats. Yamaha R25
The R15 was a game changer for Yamaha as the superb motorcycle enabled the Japanese company to go in for what it has always stood for — pure speed. Now it yields place to Yamaha R25, the all-new 250cc sportsbike, which was unveiled at the Tokyo Motor Show in November 2013. The R25 comes with a twin cylinder motor which will be liquid-cooled and will employ an advanced fuel-injection system. It looks like a mini version of the Yamaha bike that Jorge Lorenzo rides in the MotoGP Yamaha due to its razor sharp looks styled after the venerated YZF series of superbikes. The twin headlamps and the LED tail lamps increase the bike's sex appeal. Like the CBR300R, ABS will be optional. 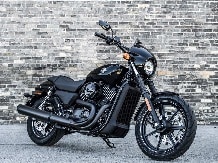 Harley-Davidson Street 750 Black is beautiful and when it’s a street bike from Harley-Davidson, you can be assured you will overload your senses. From the side, the new Street 750 looks like the famed Night Rod from the side, making it instantly a bike with a lot of attitude. According to the American motorcycle manufacturer, the Street 750 is the first “new” motorcycle platform developed by it in the past 13 years. The 749 cc V-twin, liquid-cooled engine is mated to a six-speed transmission. There is serious improvement in the handling department too as Harley-Davidson has increased the angle of the V-twin to 60 degrees in order to achieve a lower centre of gravity. This Harley-Davidson makes for a practical choice as it is technologically the most modern among street cruisers. Hyosung GV250
Here is extra good news for cruiser fans. Hyosung is getting ready to launch an entry-level cruiser. The GV250 will be powered by a four-stroke, V-twin, oil-cooled and fuel-injected 249cc power plant with an output of 27.6 bhp. Though it comes with a front disc brake, cost cutting has sadly left the rear getting only drum brakes. The GV250 has a lot of eye-catching chrome — handle bars, front forks, rear mirrors and most of the engine are shiny silver. There are other stand-out cruiser elements incorporated into the look of the bike, like the classy six-spoke alloy wheels and the split seats. 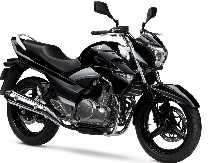 Suzuki Inazuma GW250
The Inazuma GW250 is a naked street motorbike and will be Suzuki’s first completely-knocked-down (CKD) machine that will be assembled at the Japanese company’s Gurgaon plant. The 248cc, liquid-cooled, parallel-twin engine generates 26bhp of power at 8500rpm. It will come with a revolutions-per-minute indicator, one of whose task will be to tell the rider whenever the bike slips into the eco mode. The odd-looking headlight reminds us of the Yamaha Libero, but with the GW250’s more muscular frame, Suzuki should be able to pull off the look.