Toyota Kirloskar Motors is all set to launch its much awaited Innova Crysta MPV in India on May 3. Meanwhile, features of the top end variant of the upcoming MPV have been leaked prior to its launch. 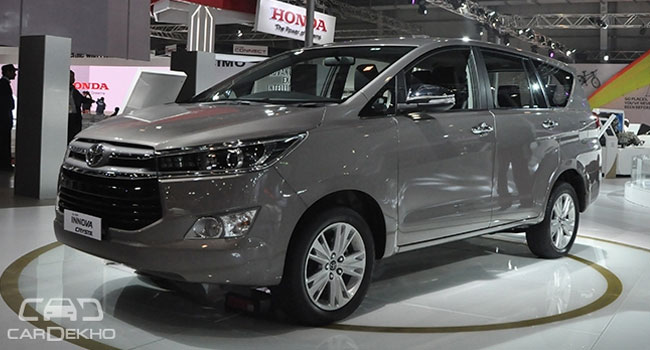 Pre-bookings of the MPV have already commenced at dealerships across the country with down payment of Rs. 50,000.

The new MPV is 150mm longer, 70mm wider and 35mm taller compared to the current generation Innova.  The overall dimensions of the new Innova Crysta stands at 4735 mm in length, 1830 mm in width and 1795 mm in height while the wheelbase remains the untouched at 2750 mm.

As far as the engine specs are concerned, the new MPV will be powered by a 2.4-litre GD VNT Inter-cooler and 2.8-litre GD diesel units. The former is capable of producing 146.9bhp of power with 343Nm of peak torque while the latter is good for 175bhp of power along with 360Nm of peak torque. The transmission responsibilities will be taken care by a 5-speed manual and 6-speed automatic gearbox. The new MPV will compete against Renault Lodgy, Honda Mobilio, and the upcoming Chevrolet Spin.