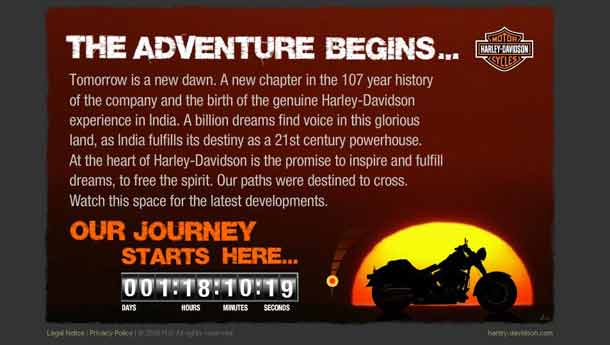 Love it or hate it. Harley Davidson is here. Yes, the Screamin’ Eagle has landed in India. Say hello to a world of big gruff V-Twins, laid back riding positions, plenty of attitude and a whole lotta lifestyle to go with your HD. Of course, with a Bad to the Bone soundtrack in the background to complete the experience. Though no official release is out, the website https://www.harley-davidson.in is live and shielded from the might of the Google search engine (a feat in itself).

It proudly states that a new chapter in the company’s history begins as the genuine Harley Davidson experience will be fired up and burbling in India in 2 days time. The 107-year old company has an epic following around the world and is arguably, the most popular motorcycle brand in history. Those rumbling big twins have stood the test of time with the Milwaukee-based manufacturer sticking to their trademark formula for building motorcycles.

They’re big, brash, and some might even call them crude but their appeal is more of character than pure engineering prowess. The Harley charm lies in the fact that they run on engineering that dates back to the day when motorcycles were made of pure metal and real men rode them, rather than clinging on for their dear lives on a plasticky, screaming multi-cylinder missile.

Harley’s don’t come cheap, and it’s understood that with the duty structure prevalent in the country, we won’t be ditching our Jap rides for Milwaukee Iron in hordes any time too soon. But yes, the potato-potato will now echo off our walls, and that’s great news really.

Expect the Sportster 883 to be at the bottom end of the range with the modern HD V-Rod to top it off. Prices aren’t in as yet, but yes, it’s time to start saving up, all right!

Sales will, however, begin only  by 2010, the company said in a statement.

"As a first step, we are looking for local dealer partners who share our passion and commitment to building customer relationships, the Harley-Davidson brand and our business in India for the long term," Harley Davidson Managing Director India Anoop Prakash said.

Harley Davidson was first granted permission to start operations in India in 2007 but it had to hold back on its plans because of a crushing import duty of over 100 per cent.

However, two years hence, the cruiser's popularity seems to have far outweighed other considerations like price - which is expected to be multiples of lakhs.

"Given the rapid development of India's economy and physical infrastructure, this is exactly the right time to bring the world's greatest motorcycles to one of the world's largest motorcycling nations," Harley-Davidson Motor Company President and COO Matthew Levatich said.

The excitement over the famed bike maker entering India is already palpable online. A clock on the Harley Davidson-India website is counting down hours, minutes and seconds for the "adventure" to begin.

However, details regarding the models and price range of the bikes are not available on the website.

Specific details on which models the company plans to launch were not available. Under the terms of the appointment, Prakash would be responsible for sales, business development and marketing activities in India.

"Given the rapid development of India's economy and physical infrastructure, this is exactly the right time to bring the world's greatest motorcycles to one of the world's largest motorcycling nations," Harley-Davidson Motor Company President and COO Matthew Levatich said.

Harley-Davidson is the global leader in cruising and touring motorcycles and ranks as one of the strongest brands in the world, with motorcycle sales now in more than 70 countries.