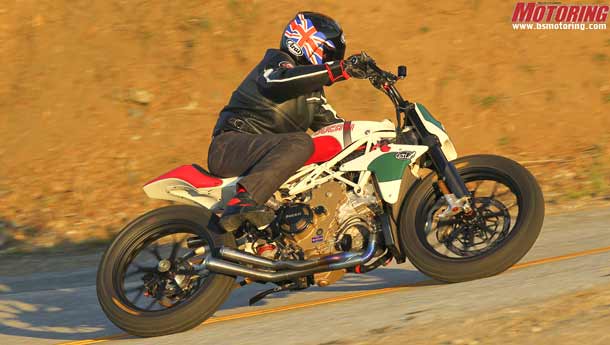 We usually think we’ve seen it all but every once in a while, a machine comes along and lands a sucker punch on our faces so hard, it rearranges our facial topography. This is one of those times. You haven’t seen it all until you’ve seen this. Roland Sands, custom bike maker extraordinaire, ex-racer and all-round cool chap, has built this radical new custom motorcycle – a custom street tracker built around a whacking great Ducati Desmosedici RR, a veritable MotoGP racer for the road, with plates and blinkers. So, here’s the crazy recipe – take a fast, exotic and ridiculously pricey Ducati Desmosedici RR, gut the bodywork, slap on minimal custom bodywork, let the top-shelf running gear be, slap on some knobbies (yes, knobbies!) and after a couple of finishing touches, you have a $200,000, 200 horsepower street tracker/dirt track racer that’s mad as a hatter. It’s safe to assume that no one has ever done something quite as wildly exotic. It’s dripping with titanium, magnesium alloys, carbon fibre, aluminium and everything in between. Needless to say, with open pipes like those, the guttural soundtrack only rivals Supermarine Spitfires when it comes to the sheer intensity.

Of course, Roland Sands isn’t the one to sit around appreciating his fine work sitting a paddock stand – he rides and rides the living daylights out of a motorcycle. With that sort of Godlike-power to the wheels and an upright seating position with no wind protection to speak of, the Desmo Tracker is one helluva ride. Hooligan would be too tame a world to describe it, as its sheer velocity demolishes anything in sight. But that’s not all – notice the knobbies? This was meant to be a dirt track racer, a la XR750, although with nearly three times the horsepower. Fully utilizing even 50 horsepower off the road is a challenge but imagine taking a MotoGP bike sliding on the dirt!

Roland compares the power to that of an immense two-stroke powerband, difference being that it extends from low-down all the way up to 14,200 RPM! It’s now that we realize that we’ve seen it all. Unless, of course, someone comes up with Ferrari V12 lawn mower. You never can tell.