Falcon Tyres, previously owned by Ruia Group, may end up liquidated after failing to attract any bidders for takeover of the stressed assets.

The company is currently undergoing insolvency resolution process in the Bengaluru Bench of the National Company Law Tribunal (NCLT). In case of liquidation, lenders are seen taking at least a 52 per cent haircut with an estimated liquidation value of around Rs 797 crore against verified claims of Rs 1,513 crore.

Sources said the asset value at the company cannot be more than Rs 105 crore as depreciation of plant and machinery has practically rendered production untenable. How­ever, 18 acres of land parcel in Mysore has been kept as collateral security which is valued at Rs 693 crore.

“The way we see it, liquidation seems to be the only option now as no company has evinced interest to take over Falcon Tyres,” said a member of the company’s Committee of Creditors.

Moreover, the source alleged, there have been “complicated financial irregularities”, which may have been one of the reasons why no one showed any interest in the takeover. In August 2018, the Securities and Exchange Board of India (Sebi) imposed a fine of Rs 8 lakh on Manali Properties and Finance and its director. According to that order, Soumitra Ghose was the director of the firm during April 2012, the investigation period. A creditor said the fine was imposed as Ghose and Manali Properties failed to submit information sought by Sebi pertaining to acquisition of shares of Falcon Tyres and Dunlop India.

However, the total amount of fine imposed on Falcon Tyres by Sebi, pertaining to various violations, amounts to Rs 1.13 crore. Edelweiss Asset Reconstruction Company is the lead lender with verified claims of Rs 1,253.36 crore, along with interest, followed by SBI Global Factors (Rs 97.27 crore), Punjab National Bank (Rs 68.85 crore) and State Bank of India (Rs 59.41 crore), and four others.

Operational and other creditors, including Sebi, workmen and individual creditors, also have a verified claim of over Rs 536 crore.

Asked if lenders are okay with the government trying to help find an investor, a lead lender said, “We have time and again appealed to all the major tyre manufacturers to come up with a resolution plan, but none ever reverted. I think it is in the best interest of all stakeholders if the company is liquidated.”

On August 17, 2018, the first round of submission of resolution plans was opened which was extended to October 3. Another round of applications was invited with the last date of submission being December 28 last year; however, no applications were received. The lenders are yet to decide if it will be a piecemeal sale. “It is the land parcel which has some valuation while the asset quality has depreciated considerably. Lenders are yet to decide how the sale will be in case the NCLT orders liquidation,” said a tyre industry source.

While the NCLT is yet to pronounce its order, the workers have already approached the state government to help revive the company.

In turn, the Karnataka government has called a meeting to decide if the company can be saved from liquidation which will save jobs.

At an event, Chief Minister H D Kumaraswamy publicly appealed to JK Tyre to take over the firm. Sources said JK Tyre is yet to receive any official communication from the state government in this regard and it is not known if its officials will attend the meeting.

In May 2018, at the behest of Edelweiss, the NCLT ordered commencement of the insolvency resolution process. It was the second time Edelweiss resorted to legal means to settle their claim. In 2017, Edelweiss moved court seeking liquidation but withdrawn its plea later.

The asset reconstruction company was roped in by Falcon Tyres in 2015 to identify investors and reshuffle the management with the objective of mitigating accumulated losses. By 2017, Edelweiss had acquired around 90 per cent of Falcon Tyres’s debt, becoming the largest lender and the same year, approached the courts for liquidation.

Ruia Group — led by industrialist Pawan Ruia, once considered the turnaround tycoon — acquired Falcon Tyres in December 2005 but by January 2015, lost control of the company after it became a minority stakeholder in its own firm.

Its other acquisitions — Dunlop India and Jessop & Company — also turned sick and closed down with the West Bengal government stepping in to take control of these two companies. 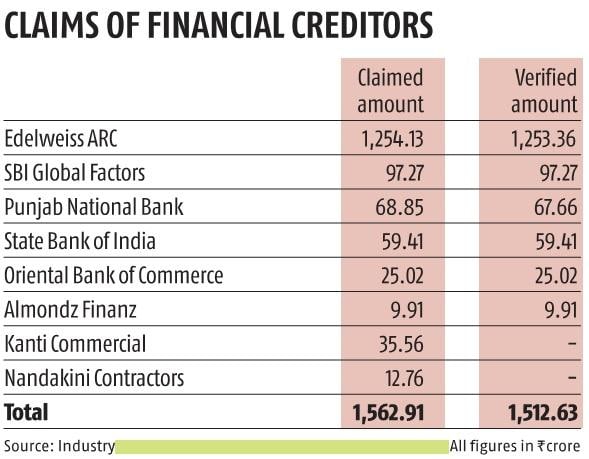