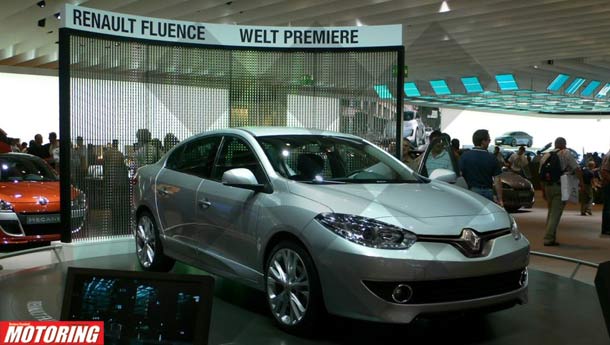 The Fluence, Renault's first product for India will go through a comprehensive facelift and is expected to make a grand entry by early-2013. This is the first picture of the facelifted Fluence, doing the rounds of the internet, ostensibly taken at some sort of Motor Show.

The facelift, as the picture suggests takes Laurens Van Der Acker's new design theme to a logical conclusion for what could be the last major facelift before the next generation hits showrooms sometime in 2015. The grille and headlamps fuse into the rhomboid Renault logo while an extended lower lip gives the Fluence some much needed sporty touches. Whether some or all of these design flourishes will be offered to our market remains to be seen.

Renault will, expectedly so, keep the two motors offered with it untouched. The 1.5-litre dCi K9K motor was recently updated and nestles under the hood of the current Fluence while the 2.0-litre petrol motor with 137 bhp and an automatic gearbox too will remain unchanged. Expect a small increase in price when it arrives next year.