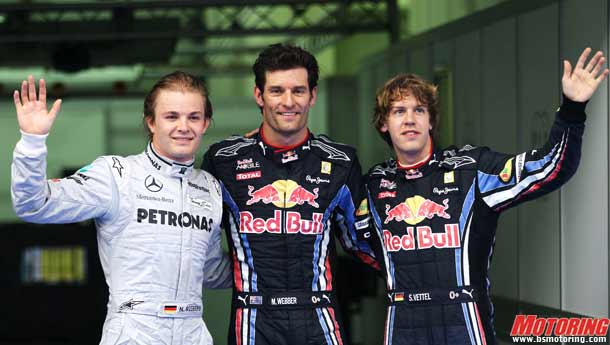 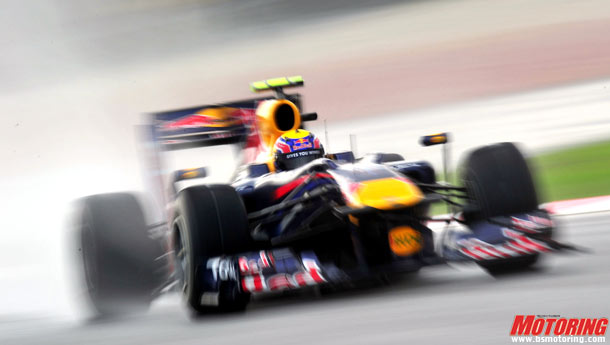 Mark Webber's pole at the 2010 Malaysian Grand Prix is the third in a row for the Red Bull team. Remember, Sebastian Vettel qualified on pole both at Bahrain and Australia, but unfortunately lost both races. The Malaysian GP could be Red Bull's first race victory of the 2010 season, and Webber will be raring to make it happen. Let's take a look at the three sessions of qualifying.

Q1: The prediction for the Malaysian GP was that the weather will be rainy. And teams were hoping for a taste of that in the practice sessions itself, so that they'd be better prepared for the race. But the weather gods played foul and managed to throw a spanner in the works. Practice was dry and quali saw rain - lots of it. Both Ferrari and McLaren weren't on the right tyres for quali and managed to get knocked out in Q1 itself - Fernando Alonso qualified 19th, Lewis Hamilton 20th and Felipe Massa 21st. The session was good for Karun Chandhok though, who outqualified his teammate Bruno Senna for the first time.

Q2: Disaster struck the McLaren team again, with Jenson Button spinning out on the gravel trap. Button starts tomorrow's race from 17th on the grid. The session was good for the Lotus team, with Heikki Kovalainen managing 15th spot on the grid.

Q3: A mere three minutes into the session, red flags were brought out. There was water standing on track, and it took a while for the qualifying session to get underway again. It was a great session for the Force India team, with Vitantonio Liuzzi managing a fine 10th place. What's even better was that his team-mate, Adrian Sutil qualified fourth. While Webber took pole, it was Nico Rosberg in the Mercedes who split the two Red Bulls. Rosberg managed to outqualify his team-mate yet again - Michael Schumacher only managed to qualify 8th, not the best for the Regenmeister, no?

With Ferrari battling McLaren at the back of the grid, and the Red Bulls trying to keep Nico Rosberg at bay in front, this looks set to be one heck of a Malaysian GP. Can't wait for the lights to go out at Sepang!