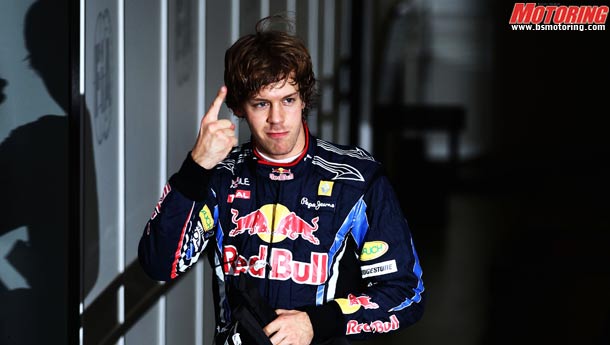 Sebastian Vettel took his first victory since the 2010 Chinese GP, by winning comfortably at the European GP at Valencia. Lewis Hamilton took second place, even though he'd incurred a drive-through penalty, and Jenson Button took third spot, putting both the McLarens on the podium.

While Vettel's Red Bull Racing team-mate, Mark Webber started the race from second on the grid, he lost out on the opening lap of the race itself. Hamilton passed the Australian, and immediately after, both Fernando Alonso and Felipe Massa made their way past Webber him as well. By the end of the first lap, Webber found himself all the way down in ninth place.

A few laps later, Webber, finding himself unable to get past traffic, pitted early. Things went from bad to worse, with the pitcrew battling with a stubborn left front wheel. Upon exiting the pitlane, Webber found himself stuck behind Heikki Kovalainen. In an attempt to overtake the Lotus on the run up to Turn 12, Webber ended up ploughing into the back of the car. The contact resulted in loss of the Red Bull's front wing, after which the car took off like a rocket ship, launched straight into the air before flipping over and heading into the barriers. Webber, thankfully, escaped unhurt.

Now, when the Safety Car came out as a result of this crash, Michael Schumacher found himself running in third position. Given the fact that all his rivals pitted, Schumacher seized the opportunity and pitted as well. However, when he was exiting the pitlane, the light at the end of the pitlane changed from green to red, which meant that Schumi had to wait and rejoin the pack at the back of the grid. This scuppered the German's strategy, and despite having made a good start to the race even though he only qualified 15th, Schumacher finished a disappointing 16th. Schumacher has called for an enquiry into the matter of the pitlane lights.

In a similar manner, the Ferraris who'd made a good start to the race, found themselves in the middle of the pack. Felipe Massa finished the race 14th, and Fernando Alonso finished ninth, after being passed by a hard-charging Kamui Kobayashi, who after running in third for much of the race finished seventh.

The finishing positions are only provisional as of now, with stewards still investigating whether or not Button, the Williams drivers, Renaults, Force Indias as well as Sebastien Buemi and Pedro de la Rosa infringed the permitted speed limit when the safety car was out.