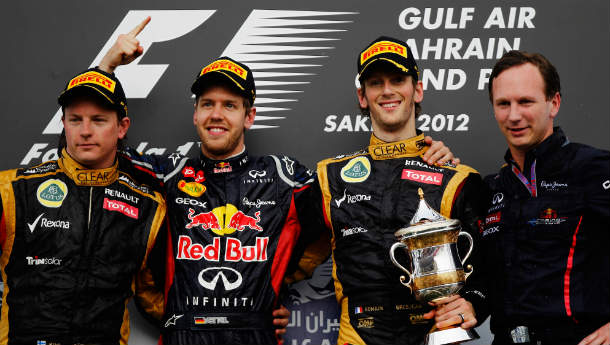 And now we have the fourth race winner in as many races in 2012. Sebastian Vettel started the 2012 Bahrain GP from pole position and went on to claim victory, although it probably wasn't as dominating a win as he had in the 2011 season.

The chase was given by Kimi Raikkonen in his Lotus, who looked like he'd be able to pass Vettel on more than one occasion. When it was time for those crucial pitstops though, Vettel and Raikkonen both came in on lap 39, and when they were back out on track, it was the Red Bull that seemed to make its tyres last better. Raikkonen had to settle for second on the grid, while his team-mate, Romain Grosjean came from seventh to third, taking the last spot on the podium.

There was plenty happening up and down the grid though, that probably resulted in things turning out the way they did. The McLaren team had what is probably their worst race weekend in a long time. While Jenson Button had to contend with a disagreeable car that had lost pace steadily through the race, things only got worse. When he was about to catch Paul di Resta and Nico Rosberg, the driver realised his car's left rear tyre was punctured. And after the pitstop to change the errant tyre, the driver complained that the car had a strange noise coming from the engine. Eventually he drove into retirement and was classified 18th on the grid.

Things were just as bad for Button's team-mate, Lewis Hamilton. While Lewis was also troubled by the fact that his car lacked pace, two bad pitstops from the McLaren team resulted in the driver losing 20 seconds to the rest of the grid. In the first case there was an alignment issue with the left rear wheel nut, in the second case there was a cross-threading issue once again with the left rear wheel nut. Hamilton, who'd started the race second on the grid only managed to finish eighth. The 2008 world champion was fuming by the end of the race and declared that it was how championships were lost and the McLaren team definitely needed to investigate the problem.

And while Mercedes AMG F1 had a good race in China, things came undone for them in Bahrain. Michael Schumacher didn't manage to get beyond Q1 and was set to start the race 17th on the grid. Then a gear box change resulted in a five-place grid penalty that meant the seven-time world champion could only start 22nd on the grid. After battling through traffic, Schumacher finished tenth and took one single point. His second point of the 2012 season. Nico Rosberg, who'd won the Chinese GP earlier this month finished the race fifth, the same place he'd started. Rosberg had his fair share of excitement though, after the first and second rounds of pitstops. The first incident saw him run Lewis Hamilton wide, and the second one saw him not leaving Fernando Alonso room to get past him. Alonso reported that Nico was weaving ahead of him, and Rosberg was sent to the stewards room. However stewards declared that the incident with Alonso was a racing incident. In the case of the incident with Hamilton, the stewards declared that Rosberg's car had enough room to get past, and so he was cleared.

And now the F1 circus heads to Spain for the start of the European races. Will there be a Lotus at the very head of the grid? We'll have to wait and watch.