F1: Vettel on pole at Valencia 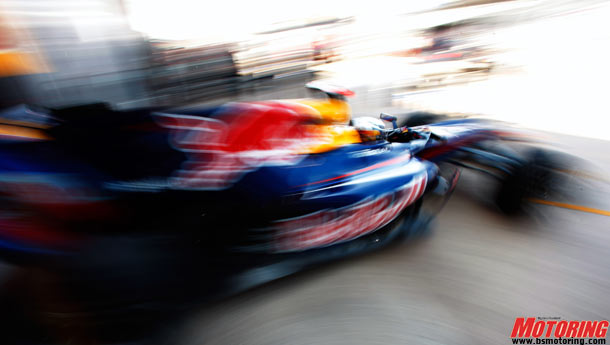 Red Bull might have said they were going to struggle at the Spanish track of Valencia, but as the qualifying session proved, they're doing anything but that! Sebastian Vettel took a fine pole position, which means he starts the European GP from the front of the grid, and right behind him, is team-mate Mark Webber. Lewis Hamilton, who clinched pole at Valencia last year, will start the race from third on the grid.

While Mark Webber had provisional pole, Vettel managed a surprise timing of 1m37.587s during the very last seconds of the session, making this his first pole since the fourth grand prix of the season, at China.

The Ferraris of Fernando Alonso and Felipe Massa took fourth and fifth on the grid. World Champion, Jenson Button, was only able to go seventh fastest.

Now, the qualifying session was not the best the Mercedes team has seen. In fact the the session was even worse than their run at the Canadian GP, Montreal. Nico Rosberg was the better of the two, finishing 12th. Michael Schumacher looked set to make an early exit at the end of Q1 itself, however, at the last minute, he managed a time that was enough to slot him into the second qualifying session. Schumacher only managed to finish 15th, in what is one of his worst starts to an F1 race.

As for the Hispania Racing cars, Karun Chandhok outqualified team-mate Bruno Senna, yet again, but the two drivers will still start the race from the last row of the grid, in 23rd and 24th position.