F1: Schumi's car gets new chassis ahead of Spain 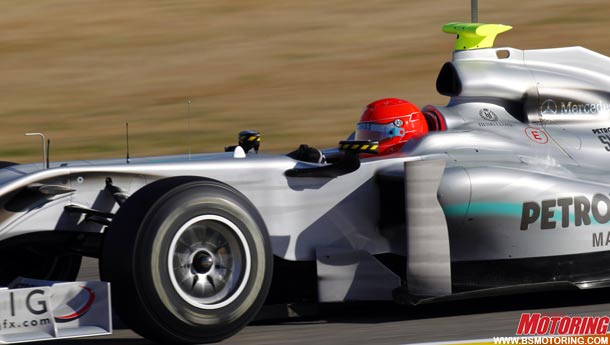 A lot has been said about Michael Schumacher's pace, or lack of it really, since the start of the 2010 season. However, Mercedes is not losing hope yet. Ahead of the Spanish Grand Prix, which is the fifth race of the season, and also the first race of the European season, Mercedes is gearing up to make some changes to Schumi's car.

The first and most significant change will be the chassis. Schumacher managed to damage the chassis of his W01 during the first few races of the season. This was never repaired fully and hence the team has elected to replace this with the chassis that Michael used during testing.

Another significant change is that the team will be lengthening the wheelbase of the car, to improve weight distribution. Mercedes is also planning an aerdynamic revamp for the first race of the European season.

Ross Brawn, team principal of the Brawn GP outfit believes that Michael will get up to speed, despite the fact that his performance is races this season has not been up to the mark, especially with team-mate Nico Rosberg outqualifying and out-racing him in all four races thus far.

Brawn has declared that they have now got enough information as to why there have been certain performance lapses on Schuey's part, and how they are doing everything on their part to remedy things.

Here's to a great performance from the Schumeister in Spain, then!